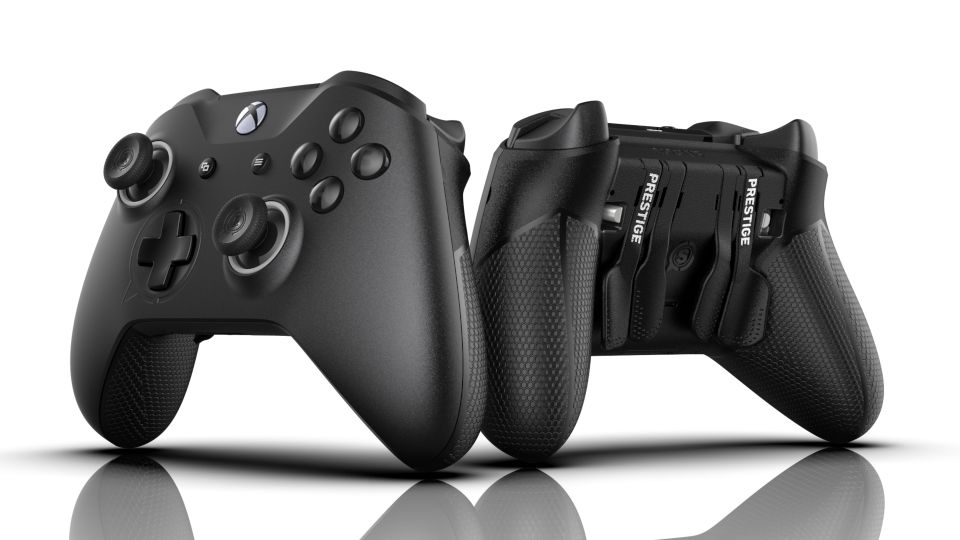 Scuf have been making high-end game controllers for almost a decade now, they have had a long term relationship with Microsoft and have also been named as the exclusive Xbox 3rd party controller for pro gaming. We’ve been given a new Prestige Xbox One controller to put through its paces and it’s a very nice piece of kit.

We’re going to cover ease of use in terms of setting up the unique features of the controller and assessing whether it really makes a difference when gaming.

View the official launch trailer below:

The Scuf Prestige controller has lots of customisation options, the thumbsticks and back paddles can be replaced, the hair triggers can be adjusted, controls can be remapped to one of the four rear-mounted paddles, the rear paddles can be swapped out and there is a quick shift trigger stop system.

Inside the very nice box comes the controller itself, a high-quality long length USB charging cable, two extra thumbsticks, the Mag Key (see later for what this does), a small trigger screw, plus an easy to understand set of instructions. The Prestige can be used on Xbox One and PC and comes in a wide range of colours.

Out of the box, the Scuf Prestige feels like a quality item. Size-wise it’s pretty much identical to a standard Xbox One controller but the rubberised grips make it feel very different and in a very good way.  I’ve found that in stressful situations the standard controller can start to feel slippy, not so with the Prestige. I tried this out on the most stressful game I own (Sekiro: Shadows Die Twice) and not once did I feel like it would slip from my fingers!

The button remapping feature is designed to keep both of your hands on the thumbsticks saving you precious seconds of faffing to find the correct button when you’re in a pinch. Each of the four paddles on the rear of the Prestige can be assigned to act as one of fourteen different buttons including the D-pad, X, Y, A, B and bumpers. The process is straightforward and only takes a few seconds to do.

In the box is the EMR Mag key which you magnetically stick to the rear of the controller. Next, you press the paddle you want along with the button you want remapping, release the button then the paddle and you’re done. Once the Mag key is removed buttons can’t be remapped until it’s reattached meaning you can’t mess up what you’ve done by accident.

Once remapping is complete the paddles act as the assigned button without any fuss. It takes a lot of getting used to as years of muscle memory is a challenge to overcome but they definitely do the job they are supposed to.

The adjustable hair triggers are designed with increased response times in mind, if the trigger has to travel a shorter distance to activate the trigger is effectively pulled faster giving you an edge. To adjust the hair-trigger it’s simply a case of using the provided trigger screw to either tighten or loosen each trigger individually until you get the feeling that you’re after. This takes a bit of trial and error to get right as each person wants a different feel but it’s very easy to do. The trigger stops also have the same idea in mind but they can only be switched on or off. The stops are easily accessible on the rear of the controller but feel a little stiff if you needed to turn them on or off quickly.

Changing the faceplate or thumbsticks is also a breeze. The faceplate simply unclicks giving you quick access to the thumbsticks which also simply pull off. I did, however, hit a bit of a snag when trying to change the rear paddles. They are designed to be swapped out easily but I found them to be a bit fragile to the point where one the paddles is now permanently bent out of shape and now feels weird when my hands are on the controller. It’s certainly not a reason to slam the controller but if you do get one, make sure you’re extra careful with the paddles.

So far, so good. The Scuf Prestige is a very nice controller with very easy to use features designed to give you the edge in gaming. The question is, does it make you a better gamer?

If I’m being honest I would say it actually makes you worse to begin with as you have to learn a whole new control scheme. As I mentioned before, all of the years of muscle memory will take some time to overcome. I imagine it would be much easier to start using the controller with a game you haven’t played before so that you don’t already know the control scheme.

Once you managed to get to grips with things though you should find your gameplay starting to improve. It really does make a massive difference being able to keep your hands on the thumbsticks permanently. The triggers, in my mind at least, are aimed at competitive shooters where a split second reaction can make all the difference. I actually don’t think I’m good enough at these sorts of games to do the triggers justice as I would need a five-second advantage to take someone out rather than the milliseconds of time saved with the Prestige. That said, the simple fact that if the time it takes for your Xbox to register the trigger has been pulled is shorter means you will be at a distinctive advantage against anyone using a standard controller.

To sum up, the Scuf Prestige is a very nice premium controller. The customisation options are very easy to implement and once you’ve got used to them, will change the way you play forever. Even if it just came with the rubberised handgrips I’d be a convert but all of the other options will make you a better gamer, or at least allow you to respond much quicker to situations in your games. For anyone looking to get a competitive edge then this is the controller for you, I would also recommend it if you simply want to upgrade your standard controller to something a bit nicer.

The Scuf Prestige is available now and pricing starts at £129.99.

View some more SUCF Prestige images in our gallery below: