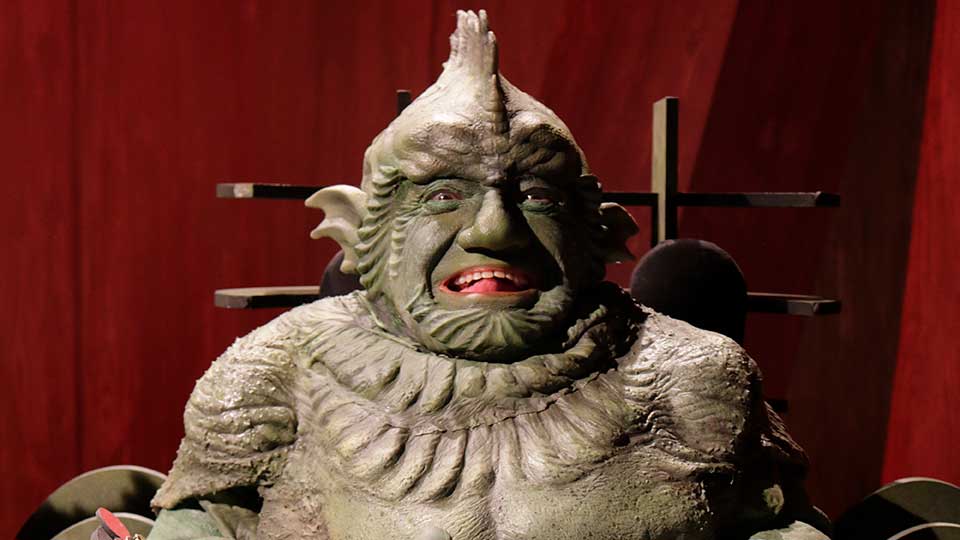 Sil and the Devil Seeds of Arodor is an original drama from the world of BBC TV’s Doctor Who, featuring Sil. The ruthless alien entrepreneur from planet Thoros Beta first appeared menacing Sixth Doctor Colin Baker in the 1980s Doctor Who episodes Vengeance of Varos and the ‘Mindwarp’ section of The Trial of a Time Lord. Excitingly, the actor who made the part so memorable – Nabil Shaban – is reprising his role. The tale is available on Blu-ray and DVD from 4th November.

Sil is worried. Very worried, which doesn’t keep his reptilian skin in the best condition! Confined in a cold detention cell on the moon, awaiting on trial for drugs offences, he faces a death sentence if found guilty. His powerful employers at the Universal Monetary Fund aren’t too pleased about that. As time runs out and friends desert him, Sil must use all of his devious, vile, underhanded, ruthless, and amoral business acumen to survive. Can he possibly slime his way out of this one?

Sil and the Devil Seeds of Arodor is produced and directed by Keith Barnfather (Mindgame), written by Sil’s creator and original episode writer Philip Martin, and stars Nabil Shaban, reprising his role as Sil, and Christopher Ryan, reprising the role of Kiv (The Trial of a Time Lord) along with Doctor Who stars Sophie Aldred (‘Ace’), Janet Henfrey (The Curse of Fenric) and Sakuntala Ramanee (Survival).

The film will receive a special gala screening with cast and crew in attendance in London on 3rd November and in Derby on 8th November.

It runs for 100 mins but the disc also contains 50 mins of special features.

Pre-order Sil and the Devil Seeds of Arodor now on Amazon.

Advertisement. Scroll to continue reading.
In this article:Doctor Who, Koch Media, Nabil Shaban, Sil and the Devil Seeds of Arodor, Sophie Aldred