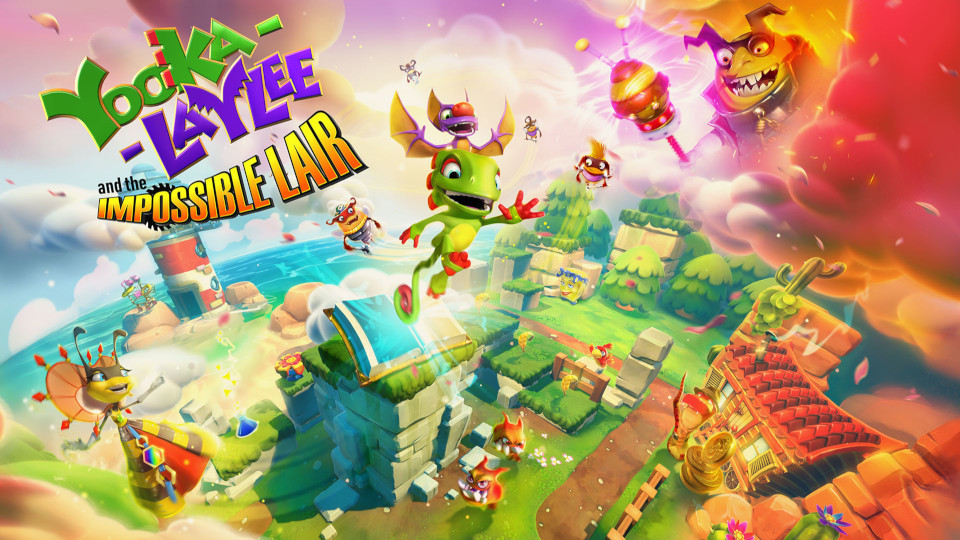 Yooka and Laylee are back! Playtonic Games bring the beloved retro-inspired duo back in an all new adventure to once again save the day from the horrid Capital B! If you played Yooka-Laylee when it came out, you no doubt caught the Banjo-Kazooie N64 vibes, but is Yooka-Laylee and the Impossible Lair a direct sequel to contend with? Well, it’s a little bit different, that’s for sure!

I’m going to go out on a limb here and say that if you’ve been interested in the much anticipated sequel, that it’s already been revealed to you that Yooka-Laylee’s adventure doesn’t mainly take place in a 3D platforming world anymore. Instead, 3D side-scrolling has filled the spot, throwing a little curveball–the intricacies of good platforming are still very present (we’ll get to that in a second!).

Watch the Yooka-Laylee and the Impossible Lair reveal trailer below:

Platforming is wildly fun with Yooka-Laylee, the enemies are adorable and well animated, all the while posing their own unique challenges on the player. To me, good side-scrollers are usually loaded with secrets and the like, and these levels are no different–plenty to find and collect, and having a good time in the process. Things do get a bit hairy from one level to the next, but the difficulty reminds me of Crash Bandicoot quite a bit.–you can go for the extra thing, but you don’t have to…but if you do, get ready for a call of skill.

The levels themselves are robust. Checkpoints and Laylee’s bells (to bring Laylee back if you lose her) are scattered in a forgiving way usually, keeping the frustration level down. Vendi’s tonics are still to be found all over the place, each one putting a unique spin on how the game is played. You can impose challenges upon yourself, or make things easier, which is what I absolutely love about the tonics. They do have to be earned though! But I’ll be honest here, I’m a sucker for a thing-collecting style of gameplay. I love Yooka-Laylee’s lists on the pause screen, always there to remind you of your progress.

View some screenshots from Yooka-Laylee and the Impossible Lair in our gallery:

The levels themselves are side-scrollers, but the overworld where you pick said levels has a 3D top down look. What’s cool about this is the overworld is a level within itself–you can explore, find secrets and have a good relax before diving into the next level. The interesting thing about Yooka-Laylee and the Impossible Lair is that you can attempt the Impossible Lair at ANY POINT. Obviously it’s a whole lot easier with the Beetallion bees on your side, but for absolute pros, taking on the final level can come a lot sooner rather than later. This cleverly shifts the dynamic of the ‘last level’ being completely accessible–a really interesting take in itself. There’s no way I can manage, but I can’t WAIT to see people take on the Impossible Lair straight out of the gate! If you do play the game level for level, you’ll rescue the Queen’s imprisoned bees, which translate to an extra hit you can take in the Impossible Lair.

Yooka-Laylee and the Impossible Lair isn’t just a good sequel to Yooka-Laylee, it’s a great game all around. It’s simple in what it asks for, but challenging to accomplish. It’s good fun for all ages too (which I learned from my eight year old hogging the controller!). I highly recommend if you were a fan of side-scrolling Donkey Kongs as well–Impossible Lair more than lives up to the hype, and then some!

Yooka-Laylee and the Impossible Lair was reviewed using a digital code provided by the publisher.