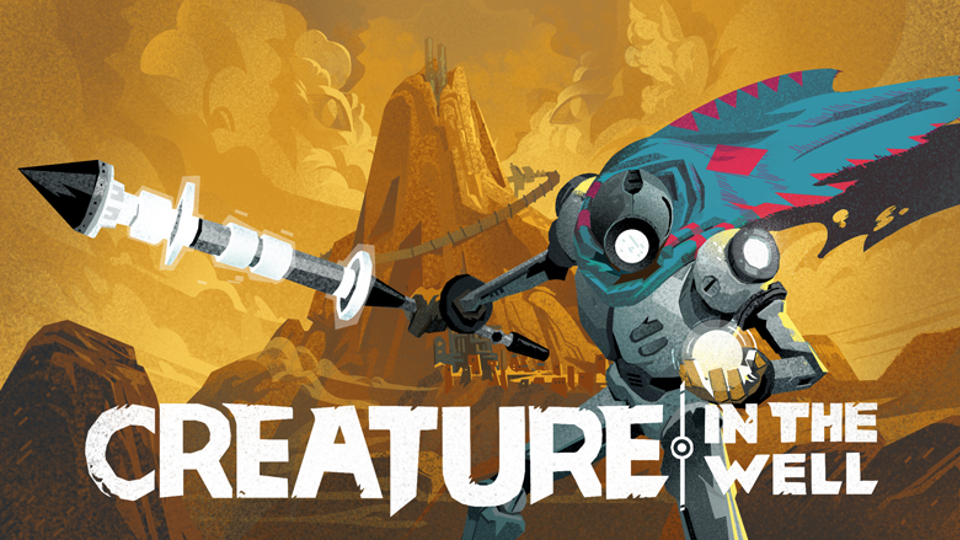 A studio that has managed to successfully reach many mediums, Flight School prides itself in “fearlessly exploring the unknown in films, games, VR, AR and whatever lies in the wide and boundless sky”. The creative can-do attitude that Flight School holds is backed up by many accolades, including (you might have heard of) Emmy and Academy awards for their work. Their endeavours are bold and striking, and Creature In The Well is no different from that.

Creature In The Well is no doubt driven visually by it’s compelling art direction. It’s interesting to look at, and inspiring with it’s deceptively minimalistic screens. The colour schemes mask, but at the same time highlight detail effortlessly. This alone was a selling point for me–I can never resist a uniquely good looking title.

Watch the Creature In The Well launch trailer below:

The mechanics revolve around a cleverly harnessed pinball play style in a dungeon crawling setting. As BOT-C, your mission is to restore power to an ancient station, built deep within a mountain. Even with the bright colours surrounding, it’s very clear that the player is meant to feel a tinge of the creeps about the place–the introduction early on to the Creature solidifies the threat of shadows lurking. Always do the eyes feel upon you travelling through the station!

Restoring the power revolves around gaining energy out of nodes, through hitting and bouncing of the ‘ball’ BOT-C volleys about. It’s an interesting idea and feels satisfying as your energy numbers start to rack up quickly. Puzzles will dictate if your aim is true and reflexes sharp whilst hitting nodes (usually) in a succession to further your progress. Your energy can be spent on various doors to open up areas on the dungeon map. A fairly simple concept with nuances lying within the difference of each room and puzzle.

View some screenshots from Creature In The Well in our gallery:

Unfortunately, Creature In The Well suffers from a few notable things: mainly the difficulty spike that genuinely feels unwarranted. Not to say it’s impossible by any means,–Creature In The Well isn’t a terribly long game, and one that certainly can be beat with determination. The will to overcome the difficulty spike, especially in the later bosses is the main problem. When BOT-C perishes, you have to make a long run back to where you left off. This isn’t always an issue, and in some ways it’s quite merciful to the player–but in others it’s a constant run of shame that feels like it could have been handled a bit different. Punishing the player with these types of mechanics works best if what the player wants has left them salivating–and as Creature In The Well does tend to suck you into it’s world, it doesn’t altogether feel like it’s enough at times to keep you interested.

Creature In The Well is unique: the art style and pinball mechanics are a great hook and instantly pique interest in playing. The simplicity of the controls are beneficial, especially in more complicated bullet-hell flashback inducing levels, and without the incredibly painful spike–this game is a lot of fun. It comes down to how in it to win it you are as a gamer and if you have the skill and patience to make it through the brutal last bits. On that note, I can recommend Creature In The Well, but if you’re a bit of a marshmallow (like me), don’t be surprised when things get a little hairy and the gameplay kicks back, calling the Creature forth to scoop you up and dump you back at the beginning. Time to get your robot running legs ready.

Creature In The Well was reviewed using a digital code provided by the publisher.