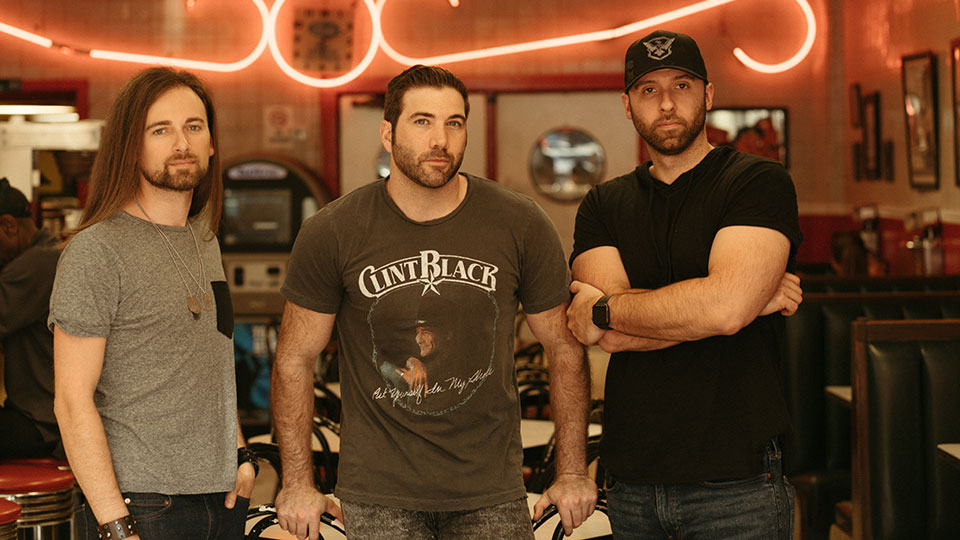 Lockeland are relative newcomers on the Country music scene but they’re wasting no time when it comes to taking their music internationally.

The trio – Michael Boris, Mark Vikingstad and Kyndon Oakes – are currently in the UK for a string of festival appearances and today they release their new single Drive. The follow-up to Til the Cows Come Home, the track is set to cement the band’s position as rising stars to keep an eye on.

I spoke with Michael this week to talk about the new single, find out how the band got together, and discuss their plans for new music.

The new single Drive is out today. What can people expect from the track?

Drive… it describes the fireworks of new love. It’s about a couple that’s just starting to discover all the little things that make them fall in love with each other. It’s very high energy, lots of shredding guitars and just a very fast paced upbeat song. It’s something hopefully people can get in their cars and drive, drive, drive! (laughs).

The song is the follow-up to Til the Cows Come Home, which I thought was a cracking song. It seems to have built a nice foundation for you. What was the reaction like when you released that track?

The reaction for Cows was very positive. We went up to number 42 on the Music Row charts in the US. People really seemed to grab onto it pretty well and seem to love that one. It has currently over eighty thousand streams on Spotify and rising.

We’ve all been friends for about eight years or so. I first met Marl at a writers’ round in Nashville eight years ago. Him and I hit it off pretty quick and then it wasn’t long after that he introduced me to Kyndon. The three of us became friends and we started writing and performing music together in different capacities; so for Kyndon’s solo project and Mark’s solo project. Then a year and a half ago, actually nearing two years now, we were in the studio working on Kyndon’s solo project. The three of us were together working on harmonies, arrangements of songs and things like that and we were like, ‘you know what, I think we just need to do this. We just need to be a trio and go for it’. (laughs).

Your music fits in with what’s going on at Country radio right now but it’s also different enough to catch your attention. How did you come up with your sound?

We appreciate that man. As any artist is, we’re always still developing our sound and trying to flesh out what that is. I think the Lockeland sound as it stands is a blend of all three of our different styles together. We kind of call ourselves 90s Country with a modern sound. Basically all three of us have very different diverse musical backgrounds. I love absolutely everything, all three of us do, but I come from more a rock/classical background, Mark comes from a pop background and Kyndon is the 90s Country guy in the band. A blend of all those things really helps drive that sound.

I feel like 90s Country is making a comeback at the moment, which is great as country music in the 90s was amazing. There are so many differing opinions about the Country music scene right now. What’s your take on it?

That’s a great question. Basically we’re just trying to be ourselves. The music that we’re making, we’re trying to just stay true to who we are and like yourself we absolutely love the qualities of the 90s Country music where it’s very lyrically based, there’s lots of great stories and a lot of incredible content and substance. Nowadays there’s more or less of that. We’re really not thinking about how to fit into the modern sound. We’re literally just being ourselves and the sound that results is kind of the sound that results if that makes any sense?

That’s the best way to be because if you’re chasing trends then you’ll get lost in the mix. If you’re doing your own thing then it finds its natural audience doesn’t it?

That’s exactly right. It’s a mark of true artistry to really hone in on what your personal sound is as a band.

You’re in the UK at the moment. Is this is your first trip over here?

How is the U.K. treating you so far?

So far we’re having a blast. (laughs) We just got in yesterday so we’re still kinda reeling in from a little bit of a jet lag. Everybody here is just so kind and just so hospitable and just obviously the scenery is breathtaking. We’re having a ball.

Country music fans in the UK have quite the reputation. What have you heard about us?

What I’ve heard about Country music fans in the U.K. from other artists… Country fans in the UK are very attentive. I guess the best way to describe it is they listen. When you’re performing a show they intently listen to the shows and they really value what’s going on over here with music. Not that they don’t in the US, they do and they’re great over there too, but a the same time over here it seems to be that UK fans are wholeheartedly involved in what you’re doing at the moment when you’re on stage, which is a very cool quality.

We can be very quiet which I think unnerves some artists because we like to listen to the lyrics and the stories. I think some artists when they’re here for first time performing think, ‘do this crowd not like what we’re doing?’ and then at the end of the song you’ll know…

The nice thing about that… we perform quite a bit in Nashville at a venue called The Listening Room. It’s not a place where you can talk and be loud, you’re there to listen and you’re there to absorb what’s happening on the stage. For us, as songwriters especially, whenever there’s an audience that’s quiet but very focused we actually love that because it shows that they’re wholeheartedly into the artistry of what’s happening on the stage which is a really good feeling.

After Drive what’s the plan for new music. Are you working on an EP or an album?

So right now we have a bunch of music in the docket. We’re figuring out the best way to release that. There’s more plans to get in the studio over the winter and track more songs so there’s definitely gonna be more stuff coming out very soon in the near future. The best way to keep tabs on that is to follow us on our social media on Facebook and Instagram. It’s funny how fast-paced the music industry is and it’s a good thing because we’re constantly learning the best ways to release different songs and timings and things like that. We’ve got a lot more music to share for sure.

What are your plans for the rest of the year? Are you going to be mainly in the studio or out on the road?

I’d say a little bit of both. We return from the U.K. on September 10th and then that following weekend of September 14th we have a show in Platteville Wisconsin. After that we have a couple of spot dates throughout October and things like that we’re still working out. Between that and the studio it’s constantly strategizing and figuring out the best ways to market ourselves and to release at the proper times It’s a constant process.

I know we’re not even in September yet but I’m the most festive person in the world so I have to ask can we expect any Christmas songs from you guys this year?

Oh that is a great question! We actually had something prepared for last year but circumstances being what they were, it just didn’t work out so we didn’t release it. We also love Christmas very much (laughs) so keep your eyes and ears open because there’s a very strong possibility we could get something together and release it out there, whether it’s a video or a track. Definitely keep your eyes peeled (laughs).

Lockeland’s new single Drive is available to download and stream now. Listen to the track below:

Advertisement. Scroll to continue reading.
In this article:Lockeland, Michael Boris