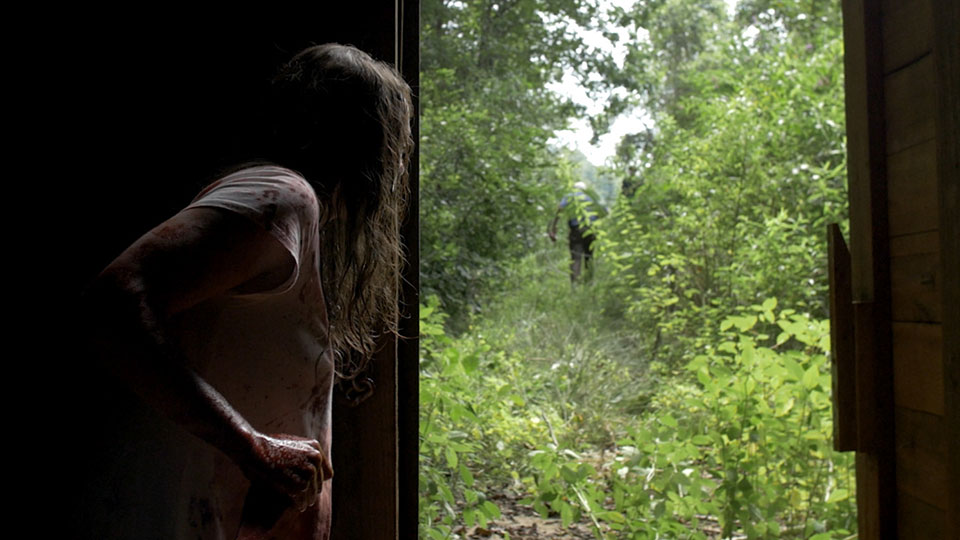 Sybil (April Billingsley) is committed to a psychiatric ward following the loss of her baby. Forced into therapy sessions with Dr. Deluce (Kelsey Scott), Sybil recounts the events that she believes took place and led to her baby being kidnapped, rather than lost. Unravelling a story that involves a sinister cult, Sybil is dismissed due to her history of mental illness and trauma she suffered as a child. As Sybil tries to piece together exactly what happened, she soon realises that to uncover the truth she’s going to have to make all the right sounds to get out of the psychiatric ward.

The Dark Red is a hugely ambitious film from director Dan Bush, who co-wrote it with Conal Byrne, one of the leads. Quite simply it’s a film of two halves with the first half told through a series of one-on-one therapy sessions between Sybil and Dr. Deluce and the second half morphing the film into a bloody revenge story. What makes the film so intriguing is that you know that Sybil is an unreliable narrator. Like Dr. Deluce you can’t help but look at her version of events through sceptical eyes, given the harrowing scene that opens the movie.

The Dark Red pulls on many different genres and influences. There are elements of horror, drama, violence and supernatural, and the combination of them all is quite delicious. I didn’t take my eyes away from the screen once, always eager to find out what happens next. The story is layered with lots of interesting details, and Sybil is fleshed out remarkably well. You feel like you know her and it’s refreshing to see such a wonderfully rounded character.

In the hands of a lesser actor, Sybil could have been played very over-the-top but April Billingsley brings with her an incredible amount of restraint. It’s the things she conveys through her body language and facial expressions, that make her performance so wonderfully intriguing. She’s required to go through a rollercoaster of emotions during the course of the film and she more than takes on the challenge. This is the kind of performance that will make people really stand up and take notice of Billingsley and she deserves all the praise that should be directed her way.

The support cast is strong too. Conal Byrne is convincing as the mysterious but nice David Hollyfield while Kelsey Scott brings believability and grit to her role as Dr. Deluce. There are other actors worthy of a mention here too but I don’t want to single them out for fear of ruining the film’s many twists and turns. Suffice to say there isn’t a weak member of the cast to be found.

The Dark Red will have you guessing throughout and you’ll be unsure what to believe. It’s strength is that it is genuinely addictive and with a star-making turn from Billingsley, the film is elevated. Bush’s direction really hones in on the horror of Sybil’s situation and you always feel like you’re seeing things through her eyes, even when the situations spiral out of her control. Genuinely unsettling and chilling, The Dark Red is a tour-de-force piece of genre cinema that deserves to become much more than just a cult classic.

The Dark Red will be released on Digital HD early next year by Signature Entertainment under the FrightFest Presents label.