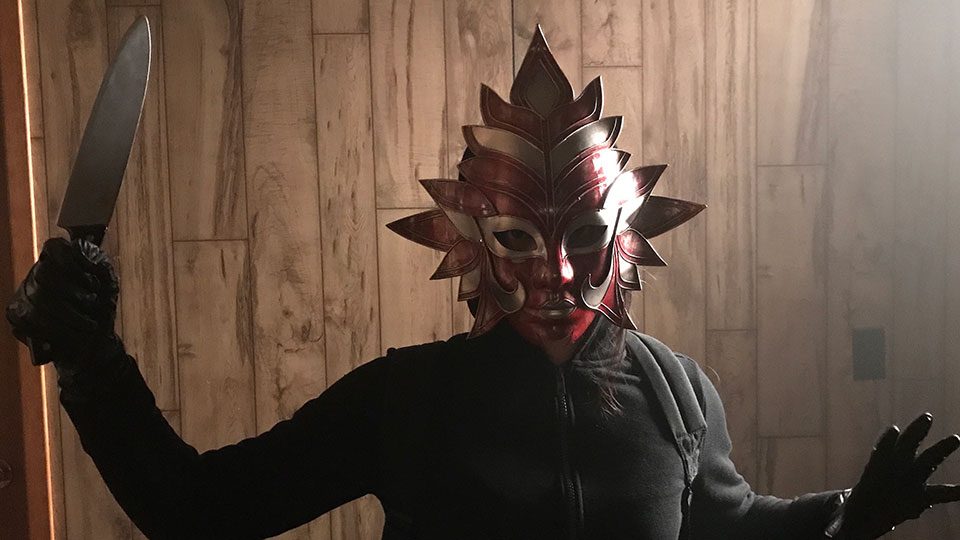 By day Miriam (Brittany Raymond), Derek (Keenan Tracey), Ian (Spencer Macpherson) and Jenny (Brittany Teo) are your normal, seemingly well-adjusted students but by night the foursome commits gruesome murders that they’ve carefully planned so they won’t get caught. Following their latest kill, they decide to plan a slaughter on Halloween night before taking a break and laying low so Sheriff Alan Gordon (Luke Goss), who happens to be the father of Derek and Ian, doesn’t uncover what they’ve been up to.

Extracurricular attempts to do something different with the slasher genre by putting you in the shows of the killers rather than the victims. The film lets the viewer glimpse the meticulous planning the foursome does before carrying out a kill and it’s interesting to see a film like this from a completely different perspective. While not as effective as 2017 FrightFest hit Tragedy Girls, and certainly lacking any sense of humour at all, Extracurricular is an undeniably chilling watch.

Director Ray Xue plays the whole film straight meaning that there’s very little in the way of relief over the film’s 90-minute duration. You get a sense early on that the planned Halloween kills aren’t going to plan but to the credit of writers Matthew Abrams and Padgett Arango, quite how the events unfold manage to be surprising and not how you’ll expect. It’s clear from the first part of the movie that one of the group is ready to leave their murderous antics behind but whether or not they’ll be able to achieve that is something that’s explored, and resolved, in a rather shocking way.

One of the aspects of the film I didn’t feel worked was the character of Sheriff Alan Gordon. While there’s nothing wrong with Luke Goss’ performance, the character is simply not in the film enough to make much of an impact. Given that his sons are part of the group murdering people, they only share one scene together so you don’t get much of a sense of what their relationship is like. You would think that a father unknowingly chasing his murderous offspring would be full of tension but sadly it doesn’t quite hit the mark as the characters are far too detached from each other.

The four leads give solid performances. Bates Motel star Keenan Tracey continues to add more bad boy credentials to his ever-increasing CV and Spencer Macpherson is genuinely creepy as Ian. For me, Brittany Raymond and Brittany Teo were the stronger actors and they stole key parts of the film with their performances.

I can see what Extracurricular was trying to do and while it is an enjoyable watch, it wasn’t the complete thrill-ride I was hoping for. I mentioned Tragedy Girls earlier in this review and that film was a much better twist on the slasher genre. Extracurricular ends up coming off a little too po-faced but it does have some great scenes that will please horror fans. An interesting idea for sure but not executed as effectively as it could have been.

Extracurricular will be released by Signature Entertainment on 21st October 2019