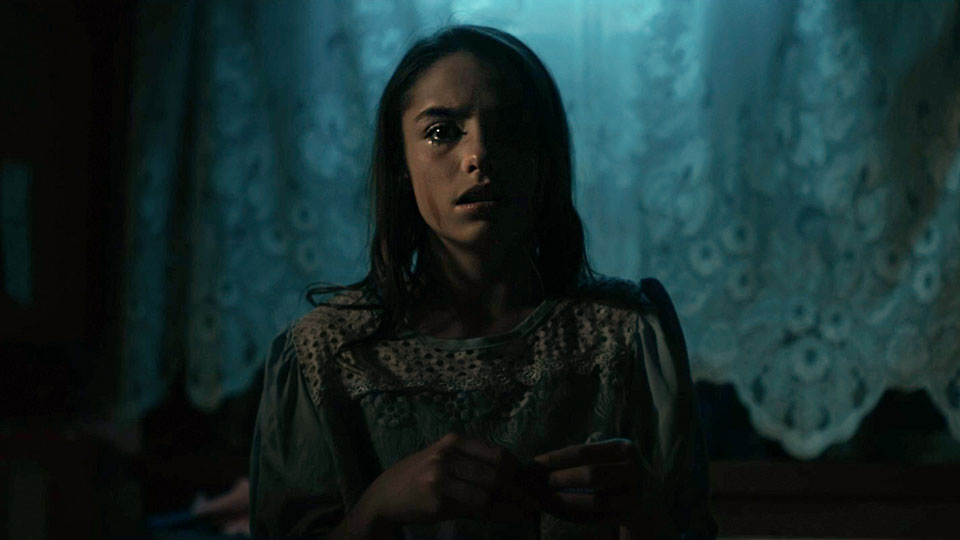 William (Aidan Devine) lives on a farm with his daughter Gloria (Ava Preston), making ends meet by disposing of dead bodies for local criminal Reggie (Ari Millen). When three bodies are dropped off at the farm, William goes about his work but is shocked when he finds that one of a victim’s, a young woman named Jackie (Jess Salgueiro) is still alive. Knowing he can’t let her go free without endangering the life of his daughter, William ties her up in the house and nurses her wounds while he tries to figure out what to do.

I’ll Take Your Dead is the latest film from director Chad Archibald (The Heretics) and it’s a psychological thriller with horror elements. William has normalised what he does for a living (and there are some interesting explanations as to how he got into the body disposing trade) for his daughter Gloria so that he can look after her and plot a way out of the grim situation they are find themselves in. Gloria on the other hand appears to be a well-adjusted child but actually she’s haunted by the bodies that her father spends his day and nights cutting up and dissolving in acid.

Deeply scarred by the passing of her mother, Gloria attempts to deal with William’s occupation by pretending that it’s completely normal behaviour. The arrival of Jackie into their lives is an unexpected upheaval with Gloria looking to the injured woman as a potential mother figure and William casting a suspicious eye over her knowing that she could pull apart his family with what she knows. Parts of the film feel inspired by Stephen King’s Misery, particularly with how Jackie is tied to a bed and unable to do anything for herself.

One of the most interesting things about the film is the way the dynamic between William, Gloria and Jackie unfolds. It goes into some places you don’t expect and despite the unusual scenario they’re in, an affection of sorts does begin to grow between them. That relationship is what makes the film’s climax a bit of gut punch and I have to admit I was even feeling a little misty-eyed by the end.

Ava Preston is the star of the film without a doubt. At such a young age she gives an incredibly nuanced and complex performance, which is better than many actors with more years of experience under their belt. She plays the character with a childlike naivety but is able to access the steelier parts of Gloria that have hardened due to the way she’s forced to live. Aidan Devine has a good chemistry with her as does Jess Salgueiro, and both actors are strong in their parts.

I’ll Take Your Dead may veer a little more toward the generic by the end but for me, I didn’t mind one bit. I was so drawn in by the unusual premise and by Preston’s performance, I barely looked away from the screen for a second. The writing is very strong and the characterisation is better than you often expect from a genre film. There are also plenty of creepy moments that will keep horror buffs very happy.