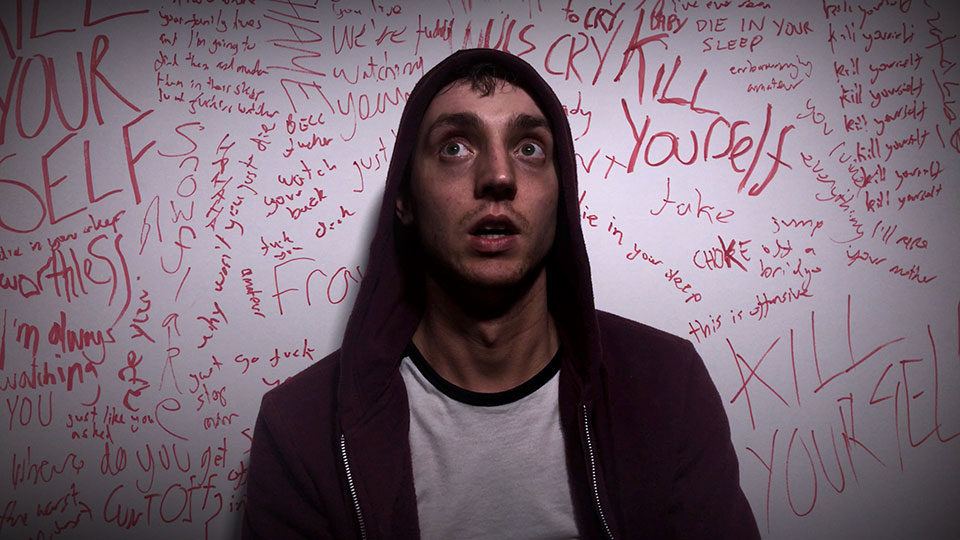 Video blogger (or vlogger for short) Graham (Graham Hughes) is desperate for one his videos to go viral. Following laser eye surgery gone wrong, Graham is left alone in his flat when his friend Erin (Annabel Logan) nips out and on camera he manages to capture an alleged haunting. When the video starts to spread like wildfire, Graham sees his views and popularity increase and he gets popular ghost hunter Steve (Paddy Kondracki) involved. As they continue to share footage of the spooky goings-on, Graham is targeted by journalist Alice (Joma West) who is determined to expose him as a fraud.

Part of Arrow Video FrightFest‘s First Blood strand, Death of a Vlogger is a horror mockumentary from first-time director Graham Hughes, who wrote and stars in the film. A very clever commentary on the lure of the Internet and the addictive quest for fame, the film does a good job of exposing the way that many people now choose to live their life, seeking validation from likes, clicks and views. Graham wants to be Internet famous, which in the modern world holds a surprising amount of worth, and he can’t believe his luck when he unexpectedly captures some strange occurrences in his flat.

With Erin and Steve by his side, Graham is determined to continue documenting his haunting, bringing with him a legion of (gullible?) fans. The film is interspersed with user generated content from Graham’s fans commenting on his video and it actually paints a rather alarming picture of the youth of today. They are willing to believe anything that Graham puts out without even bothering to question if it’s authentic or not.

Once Alice comes onto the scene, we see a shift in perception towards Graham and the film really captures what it’s like for these YouTube stars when they put a foot wrong or fall out of favour. It’s all actually pretty shocking.

What Hughes does so well with Death of a Vlogger is he constantly challenges what you’re thinking. The moment you feel like you’ve got a handle on what’s going on, he pulls the rug from under you and scares the pants off you. I actually wasn’t prepared for the amount of jumpy moments the film delivers and Graham comes across as such a likeable character, you want to believe him regardless of what the evidence around him might suggest. That’s testament to the way Hughes plays the character as he’s very engaging and endearing.

Death of a Vlogger is a very clever film and it marks Graham Hughes out as a serious talent with a very bright future ahead of him. The film is tight, very atmospheric and it sucks you right into the middle of the action. There are plenty of twists and turns, along with capable support from Annabel Logan, Paddy Kondracki and Joma West, but there’s no denying that this film is all about Hughes. The last thing I expected from Arrow Video FrightFest this year was a thought-provoking meditation on the perils of social media and Internet fame so Death of a Vlogger was a complete surprise and a wonderful breath of fresh air.