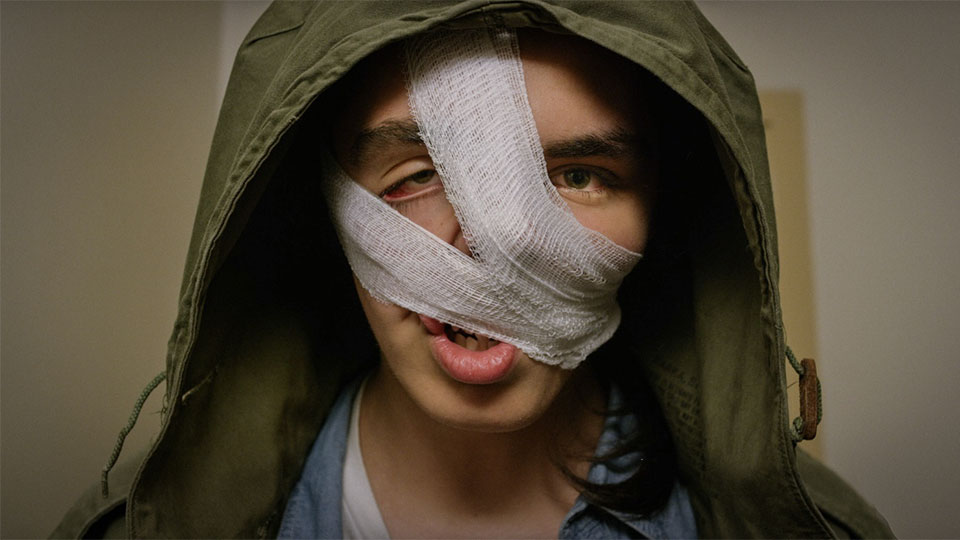 Teenager Stan (Robin L’Houmeau) artificially deforms his face so he can attend a support group for disfigured people. Trying to learn to cope with disfiguration as his mother undergoes treatment for a life-threatening condition, Stan becomes immersed in the group and decides to try and help his new friends feel good about themselves. When Stan’s deception is uncovered, he makes a deal to stay in the group and help them fight back against society’s perception of beauty.

Happy Face is a film quite unlike anything I’ve seen before. With the exception of leads Robin L’Houmeau and Debbie Lynch-White, the actors who play the characters in the support group all have real-life facial disfigurations. This gives the film a very real edge that it wouldn’t have had all the characters been played by actors in make-up. Stan uses tape and bandages to deform his face so it looks like he too has a disfigured face, allowing him to hear the stories of the others in the group.

When his deception is found out fairly early on, as you know it will be from the opening moments, Stan barters to stay in the group. He offers to help each member learn to feel good about themselves and despite the reservations of group leader Vanessa (Debbie Lynch-White), he’s let back into the group. There’s one quite funny moment during that pivotal scene when Vanessa refuses to let Stan in and one of the group points out that they are discriminating against Stan for being different.

While Stan spends increasing amounts of time with the group, his ailing mother is in and out of hospital, trying to fight the disease that’s ravaging her body. Unable to cope with the reality of that situation, Stan chooses to be around his new friends, believing he’s finding a way to cope when actually he’s found the perfect way to avoid what’s going on. There are some really empowering moments though like when Stan comes to Vanessa’s aid at a swimming pool and when he throws trash around a restaurant after he and Maggie (Alison Midstokke) are seated at the back due to how they look.

At the centre of it all is Robin L’Houmeau who gives an extraordinary performance. He’s utterly fearless as Stan and evokes so much emotion and passion. On screen he’s magnetic and he captures the struggle of his character incredibly well. He also gets a glint in his eye when he’s pushing the buttons of the other characters and you never know how far he’s going to go. Each of the supporting cast members leave a lasting impression too with E.R. Ruiz, David Roche and Debbie Lynch-White in particular giving standout performances.

Happy Face isn’t strictly speaking a horror film but I can see what it’s been included at Arrow Video FrightFest. Not all horror comes from supernatural or violent sources, some of it is much closer to home and exists in plain sight around us. What Happy Face does is shine a light on the struggles of people with facial disfiguration and educates the viewers about how actions and words can have a deeper impact than we might realise. The film is touching, emotional, difficult to watch but life-affirming, and it’s something you really need to see.