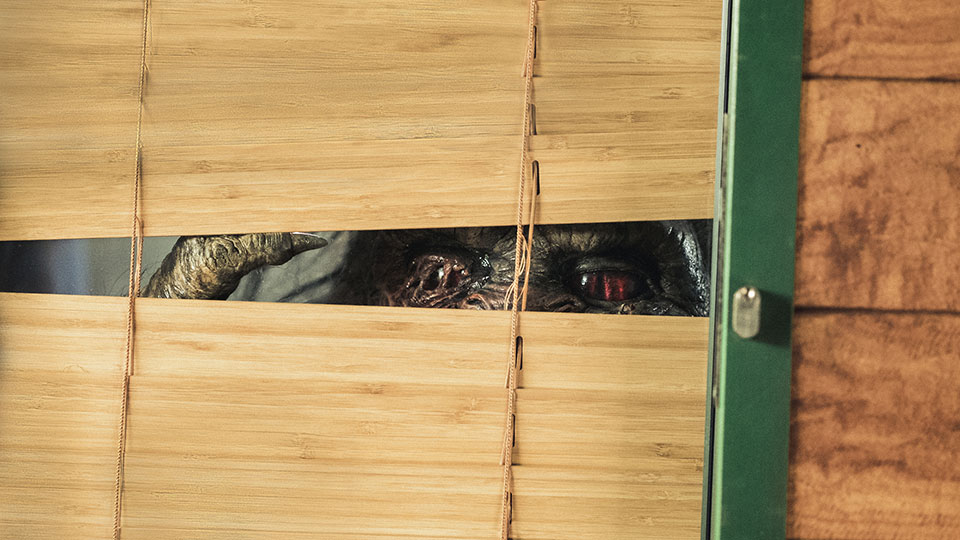 Drea (Tashiana Washington) and her brother Phillip (Jaeden Noel) live with their uncle Sheriff Lewis Haines (Stephen Jennings) following the death of their mother. Desperate to get into the local university, Drea accepts a position babysitting for one of the professors. When she struggles to entertain the kids – Trissy (Ava Preston) and Jake (Jack Fulton) – Drea takes them on a hike along with her brother Phillip and they stumble across an injured creature. Taking the creature home, which they name Bianca, the kids are targeted by Krites, who have landed in their town.

Critters Attack! is the first feature-length outing in the cult franchise since 1992’s Critters 4 and it follows on from the Shudder series Critters: A New Binge, which debuted earlier this year. Widely regarded as a Gremlins rip-off when the first film arrived in 1986, Critters has managed to find a loyal and passionate audience over the years. The new film received its European Premiere at Arrow Video FrightFest ahead of a DVD and Blu-ray release on 26th August.

If you’ve never been a fan of the Critters franchise then Critters Attack! is definitely not going to change your mind. Paying loving homage to the original series, the film is very silly but hugely entertaining. With a completely new cast of characters and the return of Dee Wallace, playing new character Aunt Dee rather than Helen Brown from the original film, Critters Attack! is aiming to be your new guilty pleasure and for this long-time Critters fan, it more then delivered.

Mixing plenty of humour with gore and outrageous deaths, Critters Attack! may not be reinventing the wheel but it serves up plenty of fan service. The use of practical effects stays true to the franchise and there’s something enormously fun about watching the Krites wreak havoc all over town. Once they start appearing, they come thick and fast and the inclusion of female Krite Bianca gives the film an unexpected social undertone that resonates in the current climate.

The acting is a little rough around the edges here with director Bobby Miller not quite getting the polished performances from his cast that he should. Tashiana Washington is one of the standouts as the quick-witted and often funny Drea, who takes the Krite invasion in her stride while trying to protect the kids she’s babysitting. It’s also fun to see Dee Wallace back in the franchise, even if she doesn’t get much more to do than walk around blasting Krites.

Critters Attack! delivers everything it was supposed to. It’s silly, it’s funny and it’s a hoot from start to finish. The film isn’t trying to win awards or reinvent the franchise, it’s been made to give long-time fans a much-needed does of Krites and I found it satisfying. Is it an amazing film that’s going to be considered a classic? No it’s not but it will leave you with a big smile on your face and a craving to go back and watch the original films.