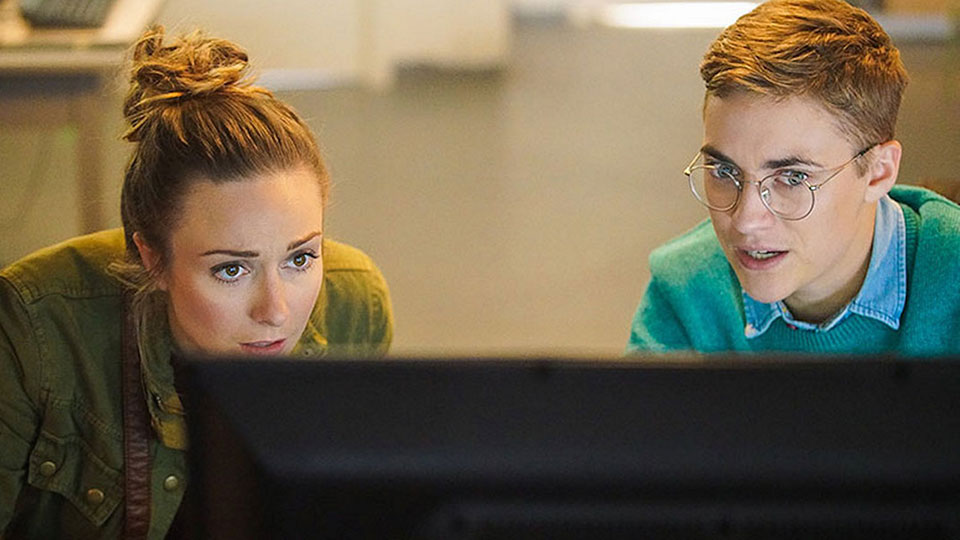 College student Grace (Amy Groening) receives what she thinks is a silly Halloween-themed meme on her room-mate Zoe’s (Marletta Laan) computer. Asking what her worst fear is, Grace submits an answer and a message on the informs her that she’s been saved. When her room-mate refuses to take part, she receives a threatening message warning that her worst fear is about to come after her. The girls take no notice but when tragedy strikes, Grace teams up with computer nerd Spencer (T. Thomason) to find out where the meme is coming from and put a stop to it.

Halloween Party is the latest project from filmmaker Jay Dahl and it’s one that packs much more of a punch than you’ll expect from the start. Taking inspiration from The Ring and giving it a post-modern twist, Dahl delivers a film that will definitely catch you off-guard. For the first 30-minutes or so, the film establishes a nice balance between horror and comedy but after that point, it takes off its gloves and sucker punches you time-after-time. As Grace and Spencer piece together what’s really going on, the scares come thick and fast.

It’s really hard to say more about the film’s plot without giving too much away. I would definitely say the synopsis released for it gives you way more of the plot than you should know going into it. Part of the fun of the film is looking for clues along with Grace and Spencer because that way the full horror of the situation dawns on you at the same time it does them. The second half of the film is proper edge-of-the-seat stuff and there are some fantastic scares.

Halloween Party goes for tension and suspense rather than blood and guts, and that works in its favour. The visual effects are very impressive and there’s one particular scene that’ll make you terrified to sit on the toilet ever again. That’s all I’m saying but just typing those words gives me shivers down my spine.

Amy Groening and T. Thomason make for a very dynamic duo as Grace and Spencer. I really appreciated Dahl’s choice not to try and match them up romantically. The film didn’t need it and they form such a strong chemistry as a platonic duo, it would have ruined that. The two actors bounce off one another, trading quips but also convincing you that they form a quick and believable bond. They are wonderful to watch and definitely one of the keys to the film’s success.

Halloween Party was a complete surprise and one of the scariest films at this year’s Arrow Video FrightFest. Packed with effective scares and two very strong lead performances, the film is one of the big surprises at the festival. Dahl is obviously a big horror fan and Halloween Party unravels like a love letter to the jump scare horrors that dominated the 80s. I had an absolute ball watching it and I can’t recommend it highly enough.