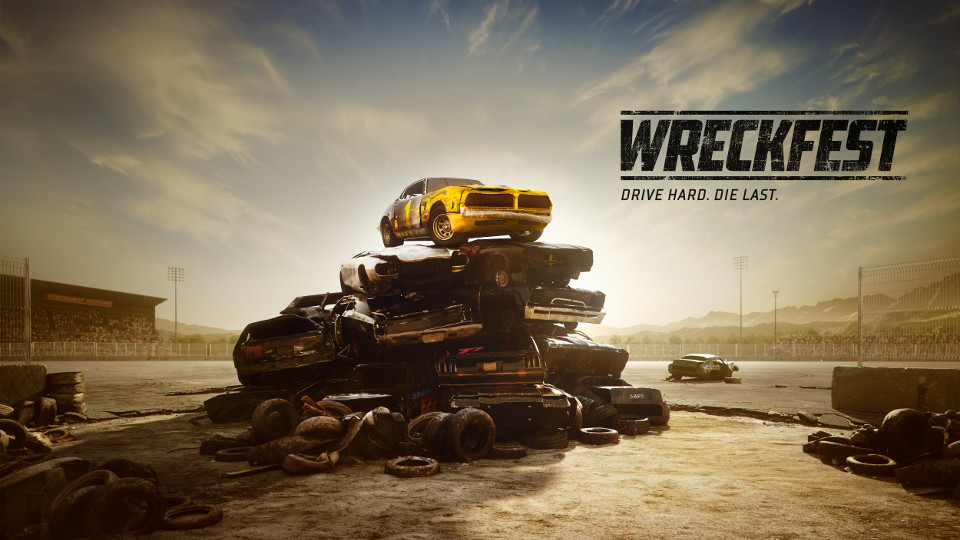 I have fond memories of the FlatOut series. I spent countless hours on FlatOut 2 on the PlayStation 2, the thrill of smashing through gas stations and metal scraping on metal was awesome. Over a decade later, Bugbear Entertainment are back with their new vision for the series. After a shaky Kickstarter campaign, let’s see how Wreckfest finally turned out.

As expected there is no story, so we move onto the meat of this pie, the gameplay. The first event you start is a destruction derby race in a small field where you all ride lawnmowers. Your goal is to take out as many rivals as possible. From there you are given your first real car and enter the league.

Watch the Wreckfest launch trailer below:

Races are pretty straightforward. The first thing you’ll notice is how small the laps are, on the surface it’s pretty disappointing. This is true for the entire game, the races are over before you know it. Wreckfest does have some tricks up its sleeve and the first comes with the design of the lap. Almost every race has a mixture of gravel, asphalt and mud. This forces you to learn quickly that speed isn’t everything. The small laps, while disappointing, offer the benefit of knowing you can’t get miles ahead of the rest of the cars, they’re always right on your tail. Getting to the number 1 spot can be done in a couple of ways but they all boil down to a simple fact, you will have to smash some folks! Trading paint with another racer is par for the course but big hits to another car starts up the “Rival” system. When you begin this system after a big smash, you get a chance for more XP for causing further damage to that car.

Thanks to it’s aggressive AI your rival will hunt you down with ferocity and do its utmost to take you down. Destruction derby events are even more straightforward, smash everyone into dust and this is a good time to talk about Wreckfest’s excellent damage system. On it’s basic setting, you can survive repeated smashes and not worry too much about your vehicle’s performance being hampered. Don’t be complacent because too many hits will slow you down but on its “Realistic” setting, a single smash can end you. There are laps set in a figure of 8 formation and on the crossing at “Realistic” damage setting, your heart will stop. It’s an incredible feeling. The realistic setting is the way to go, brutally difficult but toe-clinchingly tense. Destruction derby events are over faster on “Realistic” setting, which is great because they take quite a while on the more basic setting. Whichever event you choose, damage stays. A crashed car stays on the course as does debris, adding to the chaos.

The car list is fairly limited at around 50 vehicles but I was fine with it. You are given what you need and don’t have to filter through hundreds of identical vehicles. Progression comes in form of a levelling system but other rewards are given out at a healthy pace. Each vehicle has a few performance and cosmetic upgrades, they don’t do much but they give you the edge over other cars. There is also a pretty robust tuning system with a plethora of tweaks available. My biggest gripe with the campaign tour was how repetitive it was, the small maps get stale pretty quickly and there are no crazy levels the FlatOut series is known for. Yet again, however, Wreckfest has an ace up its sleeve with its fantastic custom races. From here you play the maestro, you set the laps and how many cars participate as expected but you can throw some nasty challenges in as well. Want a giant combine harvester or oil tanker wreaking havoc? You sure can. Want the last place racer to be eliminated every lap? Go ahead. It’s pure chaos and you can have hours of fun creating some nasty surprises.

Graphically, it’s serviceable. While tracks look fairly basic, the car models are quite good. It’s no Forza but it gets the job done. I did notice some pretty heavy shimmering and at time, poor anti-aliasing throughout. Framerate is generally solid but derby events can cause drops, as expected. Load times are also a little too long. This was all on Xbox One X and the developers have assured us a day 1 patch is going to fix most of the issues, once these are cleared up it’ll be a nice looking title. The soundtrack is pretty underwhelming. The menus have a racing vibe, simple electronica but races have hard rock and metal throughout. I’m fine with that but people who aren’t don’t have a choice but to accept it. Also the soundtrack is pretty small.

View some Wreckfest screenshots in our gallery:

There is a part of me that is slightly let down, I wanted a new FlatOut title but didn’t get that. It’s a weird mix between FlatOut and a standard racer and it doesn’t quite stick the landing in that regard. A peppy announcer and explosive tracks would have been more digestible. Wreckfest shines where it needs to, the cars feel good, the damage system is great and enemy AI is fierce. It’s outstanding custom mode will bring hours of fun and playing this online with friends will be fantastic. The game has seen, many changes throughout development and I’m really happy with the final result. It’s simple but effective.

Wreckfest was reviewed using a digital code supplied by the publisher.

In this article:Bugbear Entertainment, PS4, THQ Nordic, Wreckfest, Xbox One