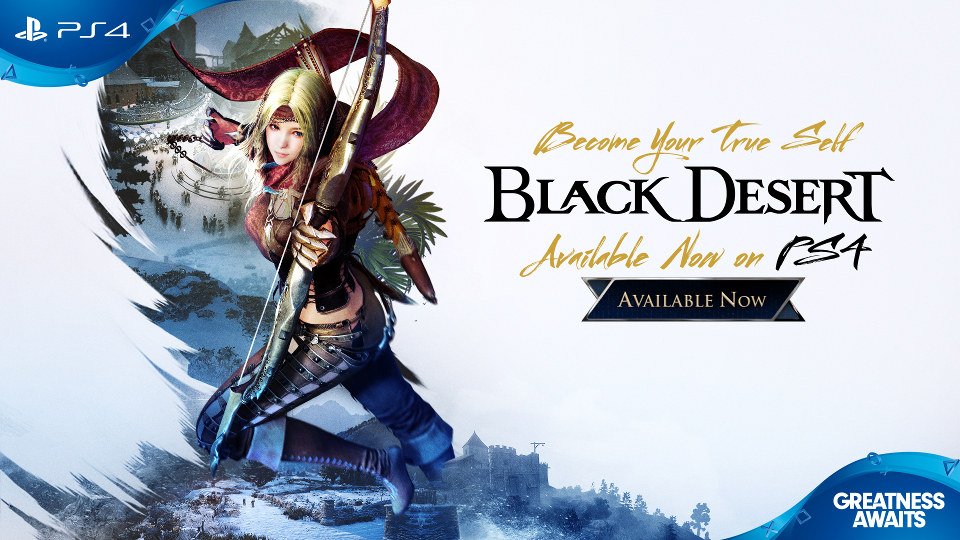 Pearl Abyss have announced that Black Desert is now available on PlayStation 4. Players have the choice of three launch editions: Standard (£23.99), Deluxe (£39.99), and Ultimate (£79.99). Each launch edition offers additional perks such as exclusive pets like Snow Wolfdog and Junaid Cat and the Shudad Outfit Set.

Alongside the launch a new live-action teaser trailer featuring actress, Megan Fox, ‘becoming her true self’ was also released. The actress has previously revealed her love of Black Desert during interviews. A full live-action trailer is expected in the near future.

More than 20 million people have experienced Black Desert across PC, Xbox One and mobile. Now PS4 players can get in on the action and skill-based combat, along with a variety of life skills, stunning visuals and the incredible character creator. PS4 Pro players are in for an extra treat with support for 4K resolution.

Players can choose from six classes including the Warrior, Ranger, Sorceress, Berserker, Wizard, and Witch, with additional classes planned for rollout in the future. In addition to the mechanics and character classes, players expressed great enthusiasm for the in-game GM events that took place during the Open Beta, including fishing and PvP battles to an amazing fireworks-filled finale.

Watch the Black Desert for PlayStation 4 – official launch trailer below:

Pearl Abyss also announced that PlayStation 4 content creators and streamers can now apply for the Black Desert Partner Program, which is a unique opportunity to work together with the game’s community team for support in growing their channel.

To celebrate the launch, Pearl Abyss organized a launch party for fans at Gamescom 2019 in Cologne, Germany, on 21st August, 2019. More than 600 attendees experienced endless food, drinks, and fun, as well as a chance to mingle with the development team. A roadmap for future content updates to the PS4 version was also unveiled which included:

Check out the official Black Desert website for more information.