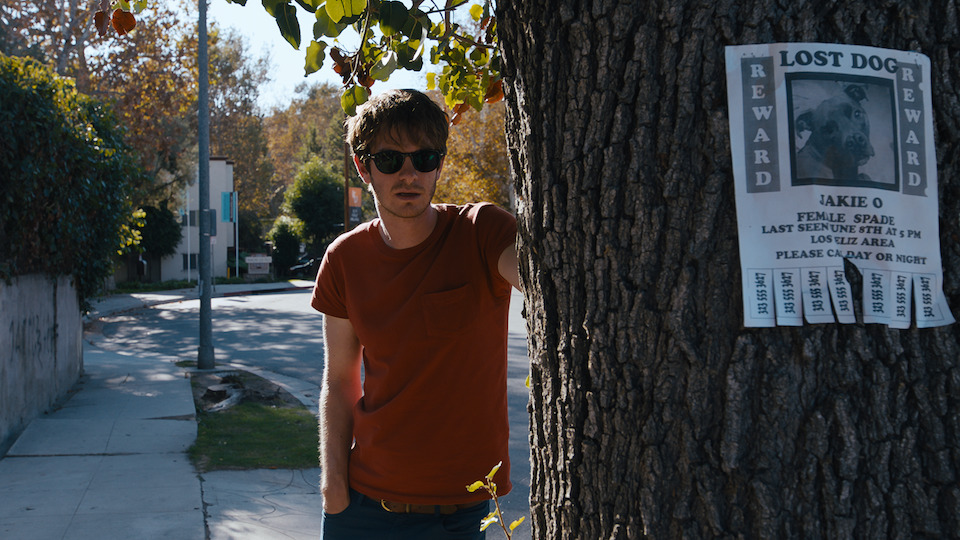 After his little-seen debut The Myth of the American Sleepover, David Robert Mitchell burst into the collective cinephile consciousness with his remarkable indie horror film It Follows. True to form in Hollywood, after one critically acclaimed and marginally profitable success, Mitchell (young, white, male) was given free rein on his next project. Producers reportedly had wanted Mitchell to cash in on It Follows and turn it into a franchise, but he had his sights set on Under the Silver Lake, a subversive film-noir pastiche set in the sun-baked suburbs of Hollywood. A 160-page script he had written years before was dusted off, and Mitchell wanted to film it word for word. No compromise. The resulting film is quite extraordinary.

Under the Silver Lake sees Andrew Garfield playing Sam, a listless and regressed man in his early 30s. He lives alone in an apartment complex in the Silver Lake area of Los Angeles. Unemployed and with seemingly no purpose in life, he exists on the anxious fringes of Hollywood, spending his days spying on his neighbours. One such neighbour is the beautiful and mysterious Sarah (Riley Keough). After catching him watching her in the pool, she invites him to her apartment.

They hang out for a while, smoking weed and watching movies, and she suggests they meet up again tomorrow. But tomorrow comes, and Sarah and all of her roommates are gone. Her entire apartment is packed up, and an unexplained symbol has been painted on the wall. Sam becomes obsessed with tracking Sarah down and finding out what happened to her, and in the process becomes embroiled in an ever-deepening conspiracy.

Now…if someone told me this was their favourite film of 2019, I’d find it hard to argue with them. It’s an incredible and ambitious film. Likewise, if someone told me this was the biggest pile of one-star wanky dross they had seen all year, I’d think they were making an equally valid point. Calling this film divisive would be something of an understatement. It takes you on this mysterious and meandering journey, that is at once thrilling and utterly beguiling, whilst simultaneously being shallow, frustrating, and intentionally opaque. Imagine a post-modern Raymond Chandler adaptation directed by David Lynch.

The film looks and sounds incredible. Michael Gioulakis’s cinematography is gorgeous and hypnotic, whilst the lush, classical orchestral score from electro-synth artist Disasterpiece brilliantly evokes the swirling soundscapes of 50s film-noir and Hitchcock-era Bernard Herrmann. Under the Silver Lake isn’t just a homage to old Hollywood, it’s a homage to old Hollywood filmmaking style, and this is reflected in the stunning production design and the purpose-built sets.

Andrew Garfield is on terrific form as Sam, continuing his thrilling post-Spidey hot streak of Hacksaw Ridge and Silence. Sam is not a nice person. Everything about him is slightly obnoxious, from the way he deals with some little kids who scratch his car way, to the way he treats women. That we are willing to spend nearly two and a half hours with this creep, is because Garfield is so good. The entire ensemble is strong, however not all of them are given the best material to work with. Unfortunately, the female characters barely exist in two-dimensions, never mind a third. I understand we are seeing them through the objectified haze of Sam’s perspective, who as we’ve established is an absolute douche, but there’s room for improvement.

It’s somewhat hard to believe that the same director of the ultra-lean and relentless horror It Follows, is also responsible for this strange and sprawling tale. It’s a film that starts weird, and gets progressively weirder. On the fringes of Sam’s labyrinthine odyssey into the LA underworld are all these bizarre subplots, including a missing celebrity billionaire, a paranoid zine writer, and one very upsetting plot about a serial dog murderer haunting the streets of Silver Lake.

Under the Silver Lake is a baffling film, occasionally absurd, and sometimes difficult to like. But I can’t deny it certainly worked on me. It’s a wonderfully odd film, beautiful and weird, and so ambitious at times it makes you laugh out loud. It’s wild that David Robert Mitchell was given such creative freedom on this project, but whether you like the film or not, it’s hard not to be impressed with his chutzpah.

On the disc there is a brief but very entertaining Q&A with Andrew Garfield following a screening the at Prince Charles Cinema. Garfield is on terrific form, great fun, and very engaging. What Lies Beneath the Silver Lake is a short featurette about the stunning production design in the film. Finally there is Beautiful Specter, an in-depth interview with Rich Vreeland (better known as Disasterpiece), the film’s composer and songwriter.