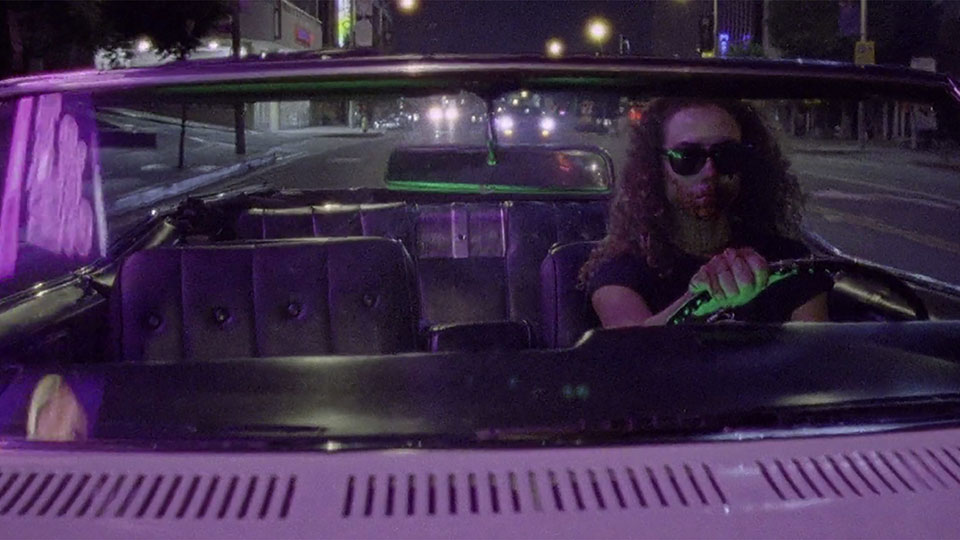 Struggling artist Dezzy (Dora Madison) is behind on her rent and lacking inspiration for her latest commission. When her agent drops her, she meets up with her friend Courtney (Tru Collins) for a night of hedonism after being hooked up to a new drug known as Diablo aka Bliss. Warned that taking too much Bliss can have bad side effects, Dezzy pays no attention after discovering it helps her creative juices flow. While under the influence she blacks out and the next day finds herself craving blood.

If you’ve ever wanted to really hammer home to your kids why doing drugs is bad, I suggest you just show them Joe Begos’ Bliss. Stylised like a grindhouse movie, Bliss is a cautionary tale of the dangers of addiction, charting the highs and lows of getting off your face on strong illicit substances. Dezzy feels that her world is collapsing around her as she stalls completing a painting due to lack of inspiration. Her boyfriend Clive (Jeremy Gardner) tries to inspire her and help her stay clean but the lure of drugs is too strong.

Begos is out to attack all of your senses with Bliss. It’s disorientating, it’s nightmarish and the strobe light effects used frequently assault your eyeballs. There’s fast cuts, times when you can barely make out what’s happening on screen and other moments where the actions so frantic, you’ll fear it bringing on a migraine. The stylistic choices add to the overall chaos of what’s unfolding onscreen and it heightens what’s otherwise a fairly flimsy plot.

Dora Madison carries the majority of the film and I suspect a fair amount of her dialogue was improvised. She delivers plenty of f-bombs over the course of the film and her deliver is natural. Begos has clearly directed her for realism rather than polished, and that fits with the overall tone of the film. Jeremy Gardner is the only other actor to get much to do and his performance is pretty memorable.

A little like Gaspar Noe’s Climax, which screened at last year’s festival, Bliss is a film you’ll either love, hate or feel indifferent to. I found it moderately entertaining but it was longer than it needed to be, leading to a repetitive feeling in the mid-section of the film. The film is a little heavy-handed in its message but it certainly does drive it home. Bliss features plenty of gross out gore and a bonkers finale that’ll make you repeat the phrases ‘say no to drugs kids’ over and over.