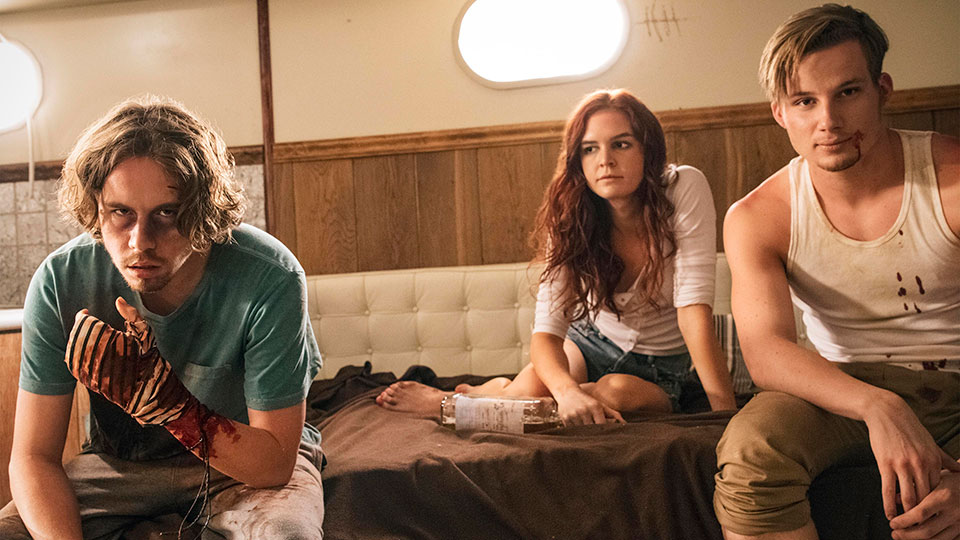 Jonah (Munro Chambers), Sasha (Emily Tyra) and Richard (Christopher Gray) set out into the sea on a yacht for a fun time. Once they’re in the middle of nowhere, the yacht breaks down and the trio are left stranded. As their situation turns dire quickly, tensions rise and violence bubbles under the surface with secrets and lies threatening to spill out. Each one of the trio does their best to keep the peace but faced with death, extreme measures replace rational thinking.

Harpoon is a horror film that relies on one location, trapping its three lead characters in an uncomfortable and increasingly claustrophobic situation. It’s established at the beginning that the friendship between the trio is full of problems. Our introduction to them is Richard pummelling Jonah with his fists while Sasha tries to stop the brawl. You know from that point that we’ve only scratched the surface of the deep-rooted issues these friends have between them. That opening does make you wonder why one earth they would all go on a yacht together but those reasons do unfold by the film’s end.

Privileged cocky, and possibly dangerous, Richard has a short temper (as witnessed by the opening scene) and he has a tumultuous relationship with girlfriend Sasha. Jonah is the classic third wheel but as he harbours feelings towards Sasha, and there is a question about a potential indiscretion that Richard wants to get to the bottom of, the inevitable love triangle forms the driving tension in the plot.

As we watch the film unfold, a narrator gives his commentary and I found this a bit annoying to be honest. Actor Brett Gelman delivers his voiceover with an air of comedy and for me, it just didn’t work. It distracted from the tension building on screen and I just don’t feel it was needed. Director Rob Grant also uses some black-and-white shots that jar a little with the rest of the film, and while I appreciate the artistic endeavour, it didn’t add to the overall experience.

The characters are rounded out well, even if they do fit into familiar stereotypes. You get a sense that the relationship here is very complicated and that’s thanks to the way the actors interact with one another. Each commit to their role and there are some nice moments once the tension dies down, where their chemistry shines. Of course those moments don’t last long and much of Harpoon spends most of its run time nearing hysterical.

With shades of Dead Calm, Harpoon is entertaining enough but it’s not particularly ground-breaking. There’s a sufficient amount of gore, and I did find my stomach churn at one point during a scene involving a seagull, but it’s mostly a straightforward thriller. There are some twists and turns along the way, which you may spot a mile off, but the climax serves up something a little unexpected. Harpoon is a solid effort but it’s not likely to be ranked among the best at this year’s Arrow Video FrightFest.