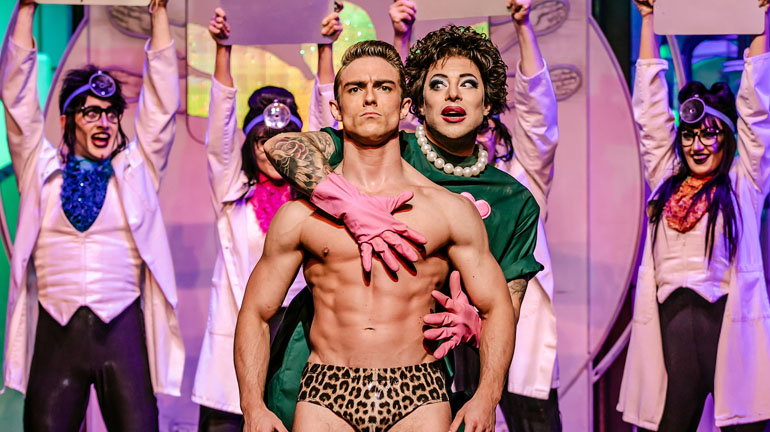 The Rocky Horror Show is a beguiling phenomenon, to put it mildly. A fringe musical that grew into a West End success before becoming a cult movie, the show that tours today is something of a hybrid of the film which fans adore and a glam rock pantomime pitched at a dedicated audience.

As far as I can tell, the version on stage at present shares an identical book and production architecture to the 40th anniversary touring version, of which a blow-by-blow review is available to read here.

So, to avoid treading over the same old points — yes, numbers such as Time Warp, Sweet Transvestite and Rose Tint My World are brilliant and the visuals are camp, kitsch and cool — let’s cut straight to the bone: is old Rocky Horror still relevant and worth seeing, again?

In short, if you’ve never seen it, yes. But be warned, because entering into the Rocky Horror domain today is rather like attending a church service. Aside from the costumed audience, there are cues to stand en masse with bawdy responses wedged between the dialogue — most which have evolved over decades by fans abusing and abasing the movie on VHS cassette in their bedrooms.

This, of course, makes an ice-cold misery like me instantly unpopular with the racy crowd. An atheist reluctance to leave my seat and dance during the third number in the show was heresy to a coven of crowing, costumed patrons behind me. But I’m an orthodox theatre goer and prefer to observe the talent on stage doing their job. Boring, I know — but I was enjoying it on the inside.

As for the heckling from the audience, it’s a bonkers, almost harassing experience and one which the cast ready themselves for like any good panto company. A few sharp comebacks about Leeds and some contemporary references about Brexit and Teresa May (remember her?) makes the adlibs all the more pointed for 2019, and for the most part, the exchange is funny. It also helps stretch out a lean show that comes in at just under two hours including interval.

But ultimately the musical feels like the property of its fanbase instead of a performance to be passively absorbed by an audience. It’s not a problem, but something to be mindful of if you’re expecting an uninterrupted rock-out musical experience. It’s more than a musical which people dress up for — it’s almost a convention and a meeting of minds. But that in itself makes it totally unique.

The cast in this touring version delivers capable and authentic adaptations of their big screen counterparts. Duncan James is engaging and offers a harsher, butcher version of Frank N Furter, though lacks some of the sensual fluidity which Tim Curry brought in his defining role. There’s also a wavering transatlantic drawl to the delivery, which bounces from British to American from number to number.

A highlight in this version is James Darch as Brad, the clean-cut square-jawed husband. In addition to a pleasing vocal, he hands over a fully-rounded performance which is played perfectly straight, making it all the funnier. Brad is the closest thing we get to a protagonist in the story, and his centered performance helps to pivot the whole show on the most tentative narrative tightrope.

45 years on, The Rocky Horror Show has evolved into its own monster. Part celebration, part panto, it’s almost like a ceremony celebrating its own extravagance and free-spiritedness. This touring version captures much of the show’s original lustre and lust for life, and whilst there’s little new from the versions that have landed recently, the uplifting choreography and thumping musical numbers continue to score highly.

Next to Tommy and Hair, The Rocky Horror Show remains one of the all-time great rock musicals which demands to be seen on stage. This tour opens up that possibility for the uninitiated and delivers a full-blooded, if not overly participatory, rock-out experience. A must-see, bucket list musical.