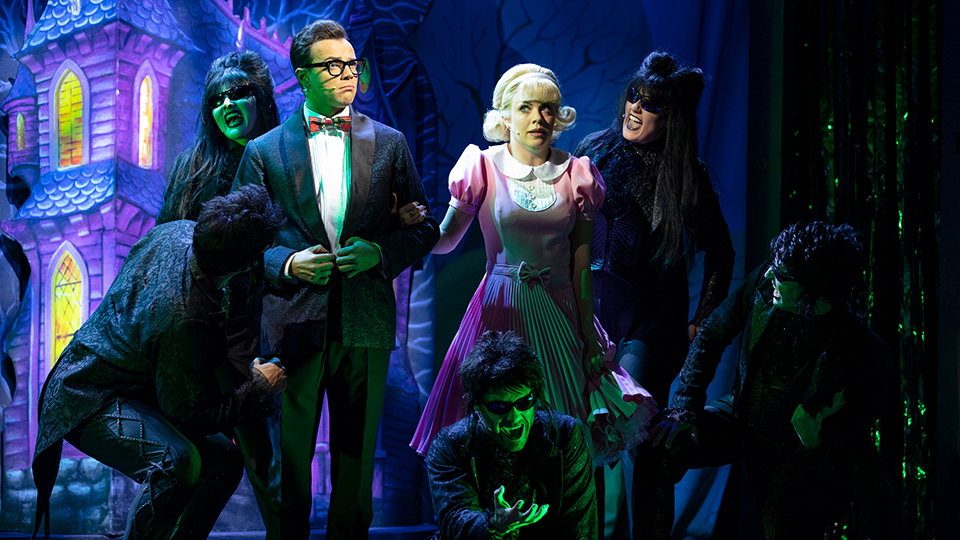 Head over to Bromley’s Churchill Theatre this week to catch cult favourite The Rocky Horror Show, which is camping it up there until Saturday. Originally a smash hit on the fringe scene, Richard O’Brien’s comic gender-bending sci-fi/horror pastiche has spawned a hit movie and grown a devoted cult following. If you’re uninitiated, pop along and see what we mean – the fans in the audience ensure that they are part of the show!

Once you’re drawn into the crazy, surreal, fast-paced world, you realise how little the imaginative yet tenuous plot matters. The premise is that, some time in the 1950s, newly-engaged couple Janet (Joanne Clifton) and Brad (Ben Adams) break down and head to a nearby castle to telephone for help. Yet the residents, from manservant Riff Raff (Kristian Lavercombe) to master of the house Frank N Furter (Stephen Webb), are up to nefarious misdeeds involving human experimentation. Little wonder a Nazi called Dr Scott (Ross Chisari) is living there. But they do at least conjure into being a specimen of male perfection known as Rocky (Callum Evans), as the sexually voracious Frank N Furter sets about seducing the newcomers. If you can’t quite follow all of that, fear not; the narrator (Philip Franks) is on hand to set the scene.

The audacious plot unfolds as a piece of musical theatre. Usherette (Laura Harrison) establishes the homage to 1950s B-movies in the opening song Science-Fiction/Double Feature, referencing actors of the period such as Leo G Carroll. The period setting is later belied by songs like the undisputed classic, The Time Warp (plenty of time to get up on your feet for that one at the encore). Other great songs include Frank N Furter’s magnificent entrance, Sweet Transvestite, and Brad and Janet’s soulful lament, Super Heroes.

The cast is terrific. Joanne Clifton, formerly of BBC’s Strictly Come Dancing, of course stands out in the dance routines, but she has a cracking voice and breathes plenty of life into the ditzy Janet. She is well-paired with Ben Adams, who is similarly comfortable with singing and performance as the geeky yet loveable Brad. Philip Franks commands authority as the narrator, but his quick wit and delightful turn of phrase make his saucy interjections a joy to behold. An especially naughty ad lib about Ann Widdecombe brought the house down! Earning a large share of the laughs is Kristian Lavercombe as Riff Raff, and Callum Evans meets the duel requirements of giving a good performance as Rocky and being physically perfect: he’s also confident enough to wear nothing but leopard print pants. The show, however, belongs to Frank N Furter, and in that role, Stephen Webb is perfectly cast – strutting every corner of the stage like a cross between Dracula and Freddie Mercury. Commanding stuff.

This production is slick, sexy and outrageously good entertainment. Clever and adaptable design by Hugh Durrant, along with snappy direction by Christopher Luscombe ensure the whole thing is a feast for the eyes as well as incredibly pacy. There’s also something joyously liberating about a show from the 1970s, where Nazi salutes, cross-dressing, sexual innuendo and gay flamboyance can all be stirred in the same plot – and all for a laugh – free from fear of causing ‘offence’ and upsetting the PC brigade. The Rocky Horror Show is a terrific reminder of how much unfiltered fun artists used to have, offering the same in return to grateful audiences.

It wasn’t all plain-sailing last night. There were one or two technical glitches that briefly interrupted the action, but they only tickled an audience that was already firmly on side and up for a laugh. An over-enthusiastic smoke machine in the final scene simply added to a growing sense of hilarity. It’s been a long time since we’ve seen an audience so energetic and enthused, and the actors were clearly feeding off the buzz they could feel emanating their way from the stalls. For a theatrical experience, that’s what it’s all about.