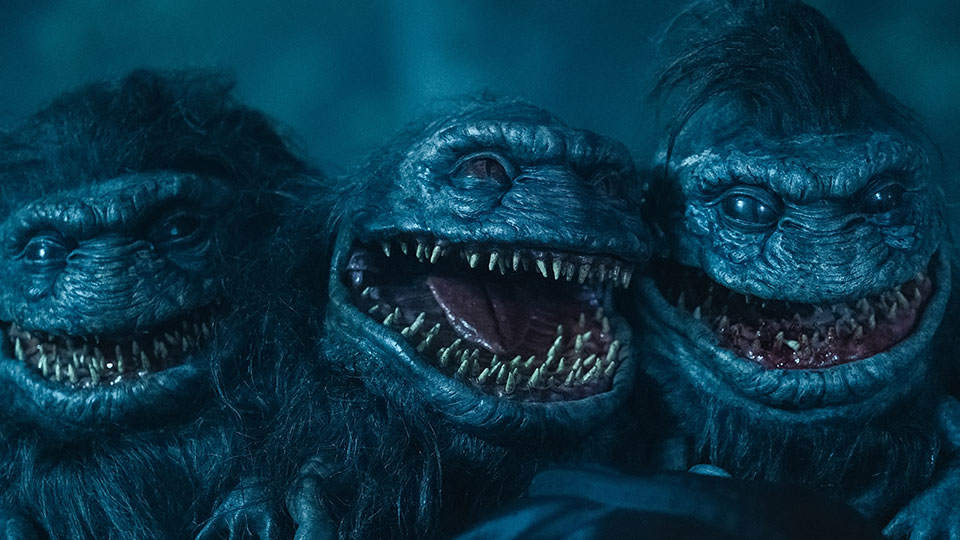 Arrow Video FrightFest is just around the corner and with so many films on offer – 78 to be exact – it can be hard to know what to see.

We already selected the 10 films you can’t afford to miss on the Main Screen and now we’re picking out 10 films that you should catch on the Discovery Screens. To be honest, it was hard to pick just 10 but we managed… just!

Take a look at our picks below…

Synopsis: Sisters Kat and Sophie, and their boyfriends Mark and Ben, are looking forward to a relaxing weekend cruising through the glorious British countryside canals on a luxury barge. Tension arises when businessman Ben refuses to turn off his mobile and fully enter the party spirit and stress is raised further when they damage another barge and its tenants track them down to the local pub. But nothing has prepared them for the intense midnight attack on their vessel by a family of flesh-eating fish mutants who have been lurking in the dark waters, waiting for their next meal.

When: 3.30pm in Prince Charles Cinema Discovery One Screen on Saturday 24th August

Synopsis: A darkly funny, claustrophobic Midnight Movie to laugh, wince and gasp at. An ex-lawyer and his crack team run an underworld service; they seek the most desperate and greedy to become fake criminals to take the fall for the rich and powerful elite’s felonies. The process is known as the Criminal Audition. In an undisclosed location, over one night they will put three individuals through hell to find the perfect candidate for their latest assignment. But their world is turned upside down when they face lies, deceit, murder and a very dangerous new client auditioning for their biggest job yet.

Synopsis: Those small furry aliens with a carnivorous bent are back – alongside original star Dee Wallace – for their highly anticipated fifth sci-fi horror adventure. Twenty-year-old Drea reluctantly takes a job babysitting for a college professor in the hope he may look more kindly on her attendance application. Struggling to entertain the professor’s children Trissy and Jake, along with her own little brother, Philip, Drea decides to take them on an energetic hike. Unfortunately she is completely unaware that everyone’s favourite E.T. furballs with teeth have crash-landed in the same area and have started devouring every living thing they close encounter.

Synopsis: Indie director favourite Dan Bush (The Signal, The Vault) returns to FrightFest with a seat-edge twisted shocker. Sybil is being held against her will in a psychiatric ward because her claims are extreme. She says her newborn baby was kidnapped by a secret society to harvest its supernatural blood. She says the ancient bloodline has great powers – it lets you hear other people’s thoughts. And she begs the doctors to let her go so she can rescue her child from the cult’s dungeons. Is she telling the truth, or is it just mere delusion? The answer will freeze your brain.

5. Death of a Vlogger

When: 10.30am in Prince Charles Cinema Discovery One Screen on Saturday 24th August

Synopsis: Prepare for a genre-bending horror mockumentary when a vlogger gains viral fame after one of his eerie videos contains an alleged out-of-this-world haunting. Following YouTuber Graham as he investigates the darker supernatural side of the web and dealing with the effects of being famous on the internet, this trip down a hellish rabbit hole includes interviews, cat videos, ripped YouTube content, fun nonsense, archive material, tension and unusual scares. Following in the footsteps of maverick independent filmmakers, this bold new feature is the perfect balance of horror and reality giving the found footage format a needed shot in the arm.

Read our interview with film-maker and actor Graham Hughes

Synopsis: The Ring Meets Halloween in Splatter University. They were known as the ‘Halloween Party’, a group of five badly disfigured children who made a pact to take revenge on a world who couldn’t look at them. Unwittingly released from their closet grave via a Halloween-themed computer meme, they now take malevolent joy in terrorising college students with their worst fears. Can the unlikely pair of bereaved Grace and hacker nerd Spencer stop the virus spreading before its too late? Or will your worst fears – spiders, alcoholic parents, pigs, the Tall Man, exorcists – come to get you too?

Synopsis: Experienced detective Lorenzo Brandoni is devastated after two personal catastrophes: his sister dies of cancer and his wife and son are killed in a car crash he’s mainly responsible for. Throwing himself into his work to ease the pain, he starts investigating a series of impossible crimes that a young nun claims responsibility for. Is she really the devil’s emissary ordered to carry out seemingly senseless slaughter? Or does she suffer from a mystical delirium? As she leads Brandoni further into his own tortured darkness to finally face his personal demons, the incredible truth will prove a shattering revelation.

Synopsis: Dealing with a pregnancy termination in Ireland has been hard for Sarah Dekker. Shunned by her religious zealot family and after also breaking up with her unforgiving boyfriend, she travels to a sympathetic friend’s house in the country to recover. But unbeknownst to her the provincial pile sits atop a mass grave of unwanted babies and their lost, confused sprits want to be reborn. Feeding on guilt and remorse the spirits need a mother. And they just might have found one in Sarah… Mixing horror and pertinent social issues, The Perished marks the debut of a new Irish genre voice.

Synopsis: Adjusting to a new life in suburban Aspen Ridge, a recently divorced mother receives mysterious letters instructing her and her teenage children to slaughter the people pictured in their correspondence before they can kill them. Paranoia and chaos ensues as the family attempts to rationally deal with an irrational situation. Making matters worse, the local law enforcement, already ineffective and patronizing, are unresponsive to calls for police aid after they are quickly overwhelmed by the sheer number of community participants in the murderous mayhem. A dark comedy chiller asking the age-old question: Just how well do you know your neighbours?

Synopsis: Withdrawn Avery Malone, a wannabe writer and lonely librarian, gets her big break when she’s hand-selected to assist her hero, reclusive author, Caleb Conrad. Whisked away to Caleb’s remote country estate, Avery is given her one and only task: to participate in a controlled psychological experiment in fear that will serve as the basis for Caleb’s next thriller novel. What could possibly go wrong? Exploring personal themes of sacrifice, remorse and absolution, Braden Croft’s third independent feature after Feed the Gods and Hemorrhage, is a compelling study into consent and the abuse of power.