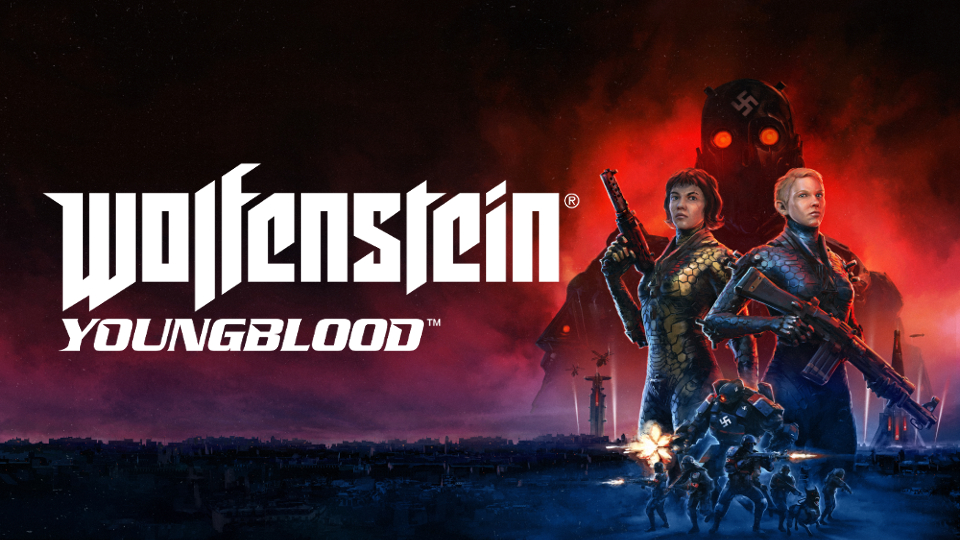 Since 1981, the Wolfenstein series has taught us that shooting Nazis is fun. Not satisfied with just a cool premise, the series has constantly perfected the FPS genre. MachineGames took over the license and gave us the next iteration of the series with Wolfenstein: The New Order. A great story with a redesigned hero in a bleak, yet funny world. Wolfenstein: Youngblood is the passing of a torch, from hero BJ Blazkowicz to his twin daughters. Can they live up to expectations?

Taking place roughly 20 years after Wolfenstein II: The New Colossus, Youngblood opens with series protagonist BJ Blazkowicz teaching his daughters Jessica and Sophie how to become Nazi killing machines. A quick cut reveals that BJ has gone missing with Paris being the only clue the girls have to go on. Bidding farewell to their mother, the girls leave for Paris to join the French Resistance, repel the Nazi invasion of 1980’s Paris and find their father.

The previous titles did an outstanding job of building their worlds. The trenches of The New Order and returning to Castle Wolfenstein in The Old Blood were brilliant openers. Wolfenstein: Youngblood sees Soph and Jess infiltrate a Zeppelin on their first mission and chronicles their first kill. It’s a gory kill and they laugh and joke about the grotesqueness. This sets the tone pretty quickly. Jess and Soph are idiots, plain and simple. They whoop and holler at every opportunity and refer to themselves as “Bros”. This rebooted series uses humour well but here, it’s just annoying. For the first 10 minutes it’s fine but 15 hours later, you just want them to shut up. The rest of the cast are bland with a capital B but the biggest failure is the villain. The New Order and New Colossus had excellent villains but in this game you get a generic snarling bad guy. The plot itself is bare bones and never really goes anywhere. The ending hints at things to come but left me more worried than excited.

Thankfully, the combat is almost identical to The New Colossus. Guns feel fantastic, each have relevant kickback and aiming feels responsive. The movement system is fluid yet retains a classic feel and double jumps and slides add up to make a wonderful locomotion system. Enemies have changed a little and now have an armour system. This means you need to pick the right gun for the right enemy. It’s like a rock-paper-scissors system and while it works well for the most part, it can get a little tedious, having to constantly swap weapons. Unfortunately, enemy AI seems to have taken a back-step, more so when playing solo. They can’t seem to pick what target to prioritise leaving you either getting obliterated or having to chase down baddies.

Each weapon has a handful of upgrades that uses coins found throughout the level or given as a reward for completing side missions (also available through micro-transactions). Upgrades are essential to best higher-level enemies as there is an RPG levelling system that forces you to take on side quests. Just running through the main quest is impossible without doing these extra quests. It’s generic padding that doesn’t feel as though you’re accomplishing anything. The level design is set up like Dishonored and while they are very well designed, it’s wasted by forcing you to run through them multiple times doing the same content. The perk system is implemented well, each perk makes you feel like you’re progressing. It’s not quite Far Cry but it’s good enough.

This game is designed with co-op in mind. Playing solo is not the way to play this. As stated, enemy AI can’t decide what to do and your AI partner isn’t concerned with safety. The crux of the game is taking on Brother Towers, which are essentially bases. Getting to the final boss is tough enough but the final fight is challenging even with a competent partner. In solo mode, when you die in this battle, which you will, you’ll have to do the entire 20-30 minute mission again. The kicker is, is that you start with the ammo you died with, not what you had originally. This is infuriating to say the least and turned Youngblood into a nightmare.

View some Wolfenstein: Youngblood screenshots in our gallery:

Co-op is better, the game uses a shared life system where you get 3 lives to use if you both go down but you can pick each-other up infinitely. What co-op doesn’t fix is the bad design. There is no loot to differentiate each-other with and you share the exact same abilities and weapons.
On a visual front, Wolfenstein: Youngblood is gorgeous, as expected. Running on PS4 Pro, the dynamic resolution has little impact to performance and there is some great texture-work and character models. The lighting is incredibly impressive, giving off a HDR vibe. Performance in-game is an almost flawless 60fps though there were issues in cutscenes. The soundtrack and voice acting is pretty good on the whole, but the poor writing leaves a lot to be desired.

There was a lot of hatred towards this and going in I was expecting the worst. The story isn’t as good as previous titles and Jess and Soph are utterly forgettable. This is saved by stellar combat….which is then marred by constant meandering and pointless back-tracking. The co-op system works well but playing this in solo is just awful. It’s another case of forcing a game to be something it doesn’t need to be. It feels like it has been designed by committee, which is sad. With a tighter focus on the story and more linear but thought out levels, they could have done away with the RPG elements and had a really great game. It’s not terrible by any means and at its discount price, you do get value for money. If you want a mindless co-op shooter to waste a few hours, Wolfenstein: Youngblood may not blow you away but it’ll fill that purpose.

Wolfenstein: Youngblood was reviewed using a digital code supplied by the publisher.