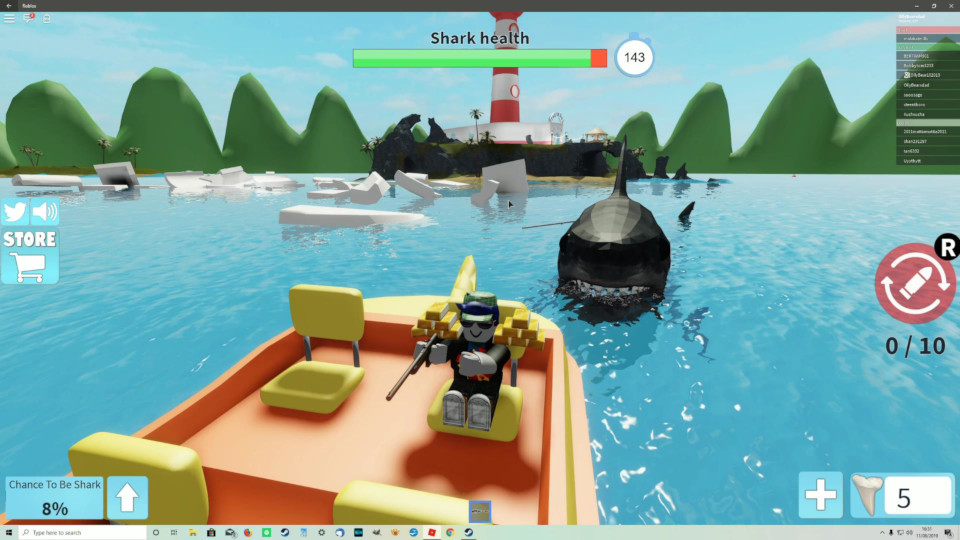 Hello fellow Roblox fans! It’s that time of the week again where I share my two top picks from the world of Roblox. As ever my five-year-old and myself have been playing lots of different games and these are the two that have stood out this week. This week’s games both have a survival element to them but each game approaches things very differently.

View some Project Lazarus: Zombies gameplay in the video below:

The premise is simple, a group of survivors need to endure wave after wave of zombies and last as long as they can. As you kill zombies or repair barricades you earn points which can be spent on better weapons or removing obstacles that block up the map. As you would expect the first few waves are pretty easy but things soon get much tougher and require teamwork to survive. Occasionally a zombie will drop a power-up that benefits the whole team that might give extra ammo, short term instant kills or other buffs.

Our second pick this week is Shark Bite by Abracadabra. In Shark Bite you will either spawn as a survivor or the shark. The aim of the survivor is to kill the shark before it eats everyone. The aim of the shark is to eat the other players before they kill you or the timer runs out. Survivors start out by choosing their boat, my personal favourite is the duck boat which you can check out in the video below. Once the game begins the players need to track down the shark and take it out using various guns that can be bought as you accrue more points (called shark teeth).

There can be some very tense situations as the shark is invisible until it comes nearer the surface to chomp down on your boat and I’ve felt genuine panic as I try to swim away without being noticed. Things get especially eerie when night time falls making it even harder to spot the eating machine circling your boat.

When you play as the shark things shift to the first-person view as you hunt down your prey. There are visual clues that help you track people down and it’s very satisfying when you manage to catch people unawares and rip their boat to pieces!

View some Shark Bite gameplay in the video below:

As ever we hope that you enjoy our suggestions and we’ll see you next week with some more top picks.