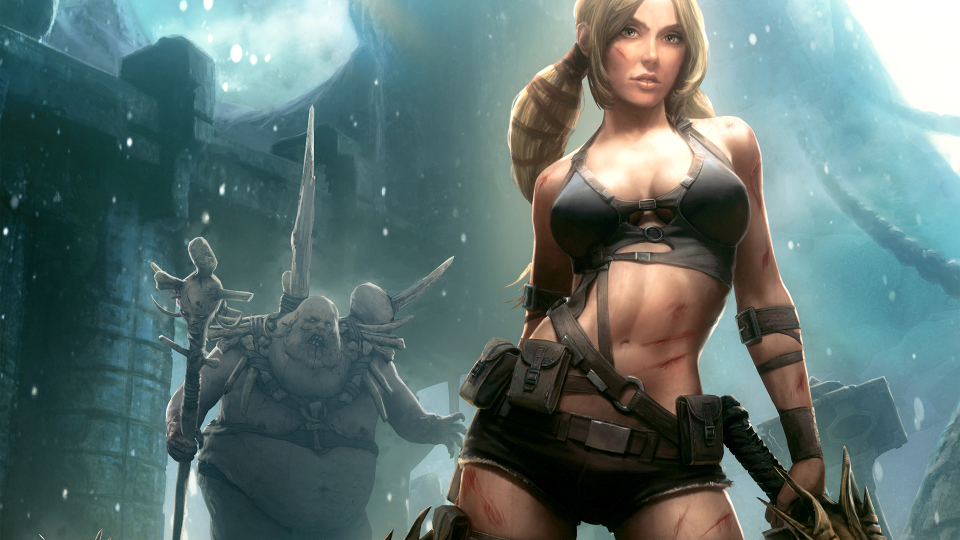 Blades of Time, the PS3 ‘hack and slash’ Tomb Raider wannabe released in 2012 has arrived on Nintendo Switch. The trailer looked promising, I had never played the original release nor heard anything about it but that is not always a bad sign, it just means that it didn’t receive mainstream success back then. Could this remaster be the start of a new behemoth, a game so underappreciated in its time that develops into a ‘must have’? It happened with Earthbound. It happened with Beyond Good and Evil. It happened with NieR. Could it happen with Blades of Time? No, definitely not.

First off, the premise. You take control of Ayumi, a treasure hunter equally adept with sword, gun or magic, and help her find treasure and her missing partner, Zero. The main game is a simple storyline with little to endear itself to the player; you move from zone to zone, kill everything in it, solve a “puzzle” (sarcastic quotation marks are entirely apt) and continue in that vein. Where other titles in the same genre have done this well, Blades of Time struggles.

View the Blades of Time – Nintendo Switch trailer below:

The control system is clunky and at times hideously delayed, I can’t count the number of times I found myself attacking a blank space after I had locked on and pressed the attack button only to find a lag meaning the enemy had moved before my input was recognised. The only other time I have come across a lag so pronounced and consistent, and one which fundamentally impacts on the gameplay and enjoyment is during online matches of FIFA where I have been paired with someone apparently playing via dial-up halfway up a mountain. In that instance the lag is forgivable given the complexity of having two players see the same thing simultaneously but in Blades of Time there was just me and STILL it happened. It happened consistently, I uninstalled and reinstalled the game twice to no avail. The issue got even worse when there were more than about five enemies on the screen, in one instance I pressed the attack button, got dressed, went to work, came home at the end of the day just in time to see the blow miss. Ok that’s a lie, but the game struggles to be consistent, accurate or even to work as one would expect.

Movement is also an issue, at times I was moving and parts of the environment weren’t or they were moving at a different speed, the camera is all over the place so you can’t utilise the dash movement properly, the syncing of character animations to voiceovers in cutscenes is reminiscent of the stereotypical terrible dub over a Japanese martial arts movie and on two separate occasions I stopped moving completely, put the controllers down so that I could answer my phone, and was forced to watch in helplessness and horror as for no reason a stationary Ayumi just slid off the side of a platform as though she was standing on an invisible skateboard.

When you buy a game there is an implicit contract between the player and the developer; I’ll give you the money, you give me the game, if I suck at it then that has to be down to my own ability, it can’t be because you’ve released a title so broken that there is nothing that could be called ‘fair challenge’.

Graphically, when the game works, Blades of Time is pleasing on the eye. I wish to make clear here that I am talking about the environments, textures and creature effects, that statement was not a nod to our frankly ludicrously underdressed heroine; the bikini clad Ayumi. The world inhabited by the game is one filled with colour and life and, given that the game is seven years old, it has held up surprisingly well. As something to look at Blades of Time is excellent.

Combat is difficult. Difficult to execute as described above and difficult to assess for the same reason. What I can say is that there is definitely variety in the combat. Though the title might lead you to assume that you would only use the giant swords you are also able to use firearms and spells which, when they work, actually feel quite intuitive. The problem is that this potential is ruined by the lagging and terrible movement control. Honestly, I got to a point where I had passed the point of frustration, waved to extreme anger on my way by and settled firmly in complete apathy.

There is an online/multiplayer mode in this release which is essentially a ‘kill as many enemies as possible’ exercise. Lead your troops through swathes of enemies to where they are emanating from and destroy the source. That’s it. You will receive gems as reward for winning a game but they are rarely worth having and simply feed into the whole ‘microtransaction’ system that Gaijin have introduced. The less said by me on the topic of microtransactions in video games the better but suffice it to say that their introduction did not make me feel more kindly towards Blades of Time.

View some Blades of Times screenshots in our gallery:

Before we conclude I have to mention the whole ‘Time’ aspect of the title. Throughout the game Ayumi is able to rewind time. The effect of this is that you are, in theory, able to use the power to create a double of yourself which can assist with tasks and combat. The most simple explanation I can give of this is actually the tutorial for its use. There are two switches to open a door, you stand on one, depress it, run to the other, depress it, then rewind time. Your double will run backwards to the second switch, both will be depressed and the door will open. A nice idea which could have made this an interesting and engaging title, but as with everything else, it is ruined by the control, quality, lag, framerate, basically it is ruined by being used in this game.

I will finish by keeping it short. Blades of Time is atrocious. If the same amount of effort had gone in to the gameplay as the graphics it would have been at least playable. It is a classic example of what went wrong with gaming at the turn of the century; it became more about how a game looked than how it was to play. Thankfully we seem to be reversing that damage now. Blades of Time looks lovely and screenshots could provide beautiful decoration to your living room, thanks to the lag when playing this your television will resemble a photo frame so I guess that it has at least some purpose.

Blades of Time was reviewed using a digital code supplied by the publisher.