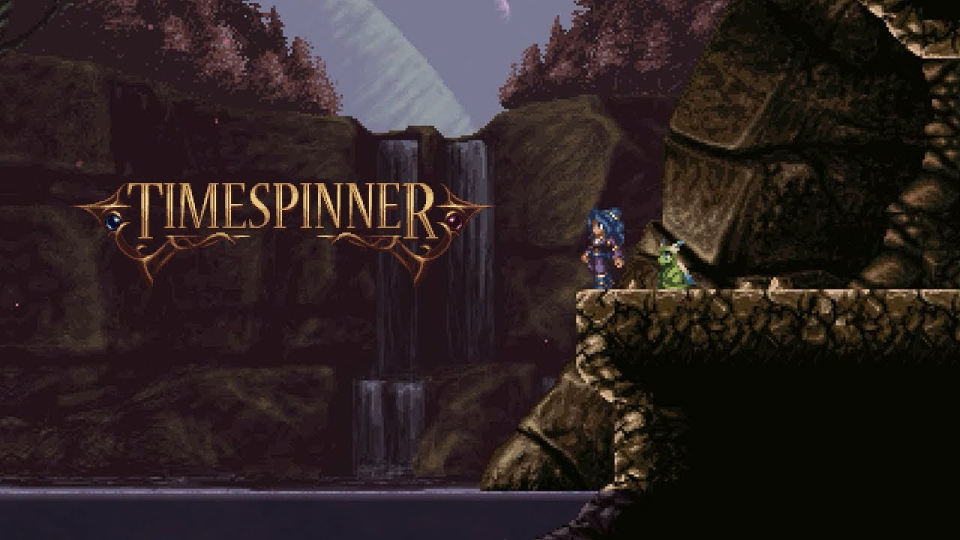 I love Castlevania. I love Metroid. I enjoy ‘Metroidvania’ titles.

I was really excited when I saw the trailer and had the chance to play a newcomer to the plethora of Switch titles in this genre, Timespinner from Lunar Ray Games. The perceptive among you will notice that I have not said that I love ‘Metroidvania’ titles, that is not because of any glaring faults in the style, but purely because of the two series I have always been more of a fan of Castlevania and (time to put on the tin hat) I felt that the series went downhill from Symphony of the Night onwards. I have no objection to adding in RPG elements to the series, the much maligned Simon’s Quest was actually fairly good at integrating these elements, it’s just a personal preference.

Watch the Timespinner trailer below:

Now, on to TimeSpinner. The only sensible place to begin is with the visuals which are utterly brilliant. Lunar Ray adopted a style that sits somewhere between Castlevania IV and Metroid Fusion and the effect is exceptional. The game takes you to both a creepy castle style environment and a more futuristic alien one and in both the stylings and attention to detail is simply beautiful to look at and suffers no deterioration when moving between docked and handheld gameplay. The time and effort dedicated to this shows in the way that even though both environments are entirely different they feel somehow consistent. I have to admit some apprehension about this, I was concerned that as I progressed it would feel as though I was playing two separate games that were just mashed together and released; like having Count Dracula popping up in the middle of a Star Trek film (as pretty much happened in Dracula AD 1972). Thankfully these fears were entirely without foundation and Timespinner perfectly melds these two settings into a cohesive and absorbing narrative.

Speaking of the narrative I was surprised that for a game so short, taking just under 11 hours to complete, Timespinner was able to cram in quite a lot of storyline, dealing with some very difficult themes. By way of a summary you take control of Lunais, a member of a magical society who possess the ability to stop time. This makes them a target for hostile invaders such as the Lachiemi who come from space on Lunais’ birthday to take the Timespinner. As she escapes the destruction of her celebration the invaders kill her mother. It is this that Lunais is determined to have revenge for and serves as her motivation for the rest of the game. Although there are cut scenes and character interaction throughout the game, much of the background depth is provided through letters, books and items you find along the way, which I felt was an effective and rewarding way of giving form to the world created in the game without the need for excessive animations or detraction from the gameplay. If only the timespinner itself were real, we could go back and show the team behind Megaman 64 how this should have been done.

View some Timespinner screenshots in our gallery:

The timespinner itself was somewhat disappointing during gameplay however. I found that it was rarely of use and would have liked to have encountered more areas where it was the only way to progress, as it was I really only used it to allow myself to freeze time during some of the boss battles to give a little breathing space. The time freezing ability takes a secondary role to the orb based combat system. As you make your way through the game you will encounter a variety of enemies who will all require differing strategies to defeat. It is in this area that Timespinner really excels. Lunais is accompanied at all times by two orbs which float around her hands, these orbs are not just standard weapons however, their abilities and the attacks you can mount depend on the way in which you ‘mix’ them. Some orbs will produce lightning, some will strike out with a sword, some will create a blast along the surface you are on. The effect is dependent on the way in which you equip Lunais and which pairings you go for. This adds a degree of strategy to the game which is often absent in similar titles. The orbs are also affected by spells, equippable items and the ability to have two of the same orb to double your attack power. All of this feeds from a simple but effective control system to create genuinely exciting gameplay. Even when I died I felt the desire to go back and try again secure in the knowledge that I would be able to do things differently to gain a different outcome. This really reduced the frustration factor often present in similar games.

The control and character movement is smooth and though some may find it a touch slow to begin with I found that it did not detract from the general feel of the game. Other characters are introduced who can assist Lunais in her vengeance though they don’t play too important a role often serving only as signposts to side quests.

Timespinner is an excellent addition to the Switch’s catalogue of ‘Metroidvania’ titles, a valiant effort from the developer with stunning visuals, engaging storyline and inventive combat. Though it is short, once I had finished the game I was left with a satisfying feeling of nostalgia, but also a desire to play through again.

I love Castlevania. I love Metroid. I enjoy ‘Metroidvania’ titles.

Timespinner was reviewed using a digital code supplied by the publisher.