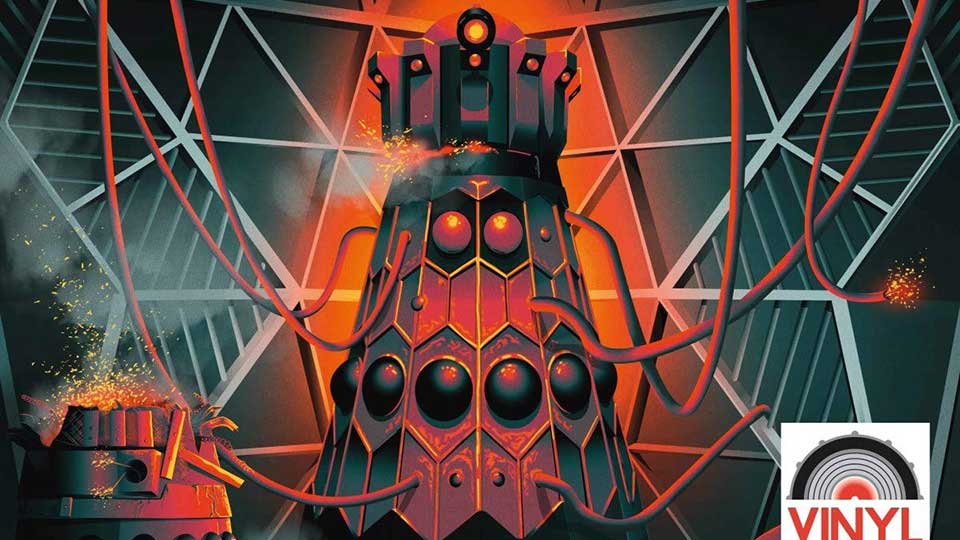 Long regarded as an outright classic and one of the Crown Jewels of 1960s’ Doctor Who, The Evil of the Daleks has taunted fans for decades thanks to the known existence of only one out of its seven episodes. And what a tantalisingly good second episode it is! Yet, short of another near-miraculous haul of long-lost missing episodes being returned to the BBC archives from overseas, the only way to enjoy The Evil of the Daleks is as an audio experience. Previously released on cassette and CD with linking narration by Frazer Hines (who plays the companion Jamie), the complete soundtrack of all seven episodes is now available in an eye-catching vinyl box set from Demon Music Group, who have released a range of Doctor Who titles, including The Daleks’ Masterplan.

The Evil of the Daleks first aired in summer 1967. It starred Patrick Troughton as the Second Doctor, with Frazer Hines as Jamie, and it introduced Deborah Watling as Victoria. It cleverly uses the concept of time travel (surprisingly rare for the show) to depict Victorian antiques dealer Edward Waterfield bringing items forward in time to sell them in the 1960s. The time travel technology is being used by the Daleks, and the Doctor and Jamie walk into the Daleks’ trap, finding themselves transported back in time to the 1860s. There, the Doctor is coerced into helping the Daleks to identify the Human Factor, to better enable them to defeat their old foe – the human race.

The ambitious and slightly silly plot (by David Whitaker) is extremely entertaining. Not only does it take the Doctor to face the Daleks in Victorian England, but it also transports him to the Daleks’ home planet of Skaro to face the Emperor Dalek! It guest-stars heavyweight actors Marius Goring and John Bailey as the unforgettable double-act of Maxtible and Waterfield.

The Evil of the Daleks comes in a card boxset in two editions. The standard has four heavyweight transluscent red vinyls with etched TARDIS on the reverse of LP1, and the Amazon-exclusive special edition has four heavyweight Skaro Swirl vinyls (black and orange), with the Emperor Dalek etched onto the reverse of LP1. As with all previous Doctor Who releases from Demon Records, The Evil of the Daleks is produced to immaculately high standards. The vinyls are colourful heavyweight 180g pressings. They are housed in sleeves with the TARDIS in vortex design and production notes on the other side, and then packaged in a slip case which pieces together into the cover art.

The orange and blues of the design work strongly evoke the 1960s black and white era, and the boxset will be on the wishlist of any fan of the original series who adores a well-made physical product. One slight niggle is that the logo for the new series, a million miles from the Troughton era, is chosen over the iconic period logo. After all, it’s long-standing fans of the original series who are most likely to add this to their collection.

That minor design choice aside, it’s impossibe to find fault with Demon Music Group’s The Evil of the Daleks boxset. Listening to it through the rich, warm sounds of quality vinyl is an experience that simply reinforces what a great story it is, well-deserving of its mythical status among fandom. A boxset to treasure.