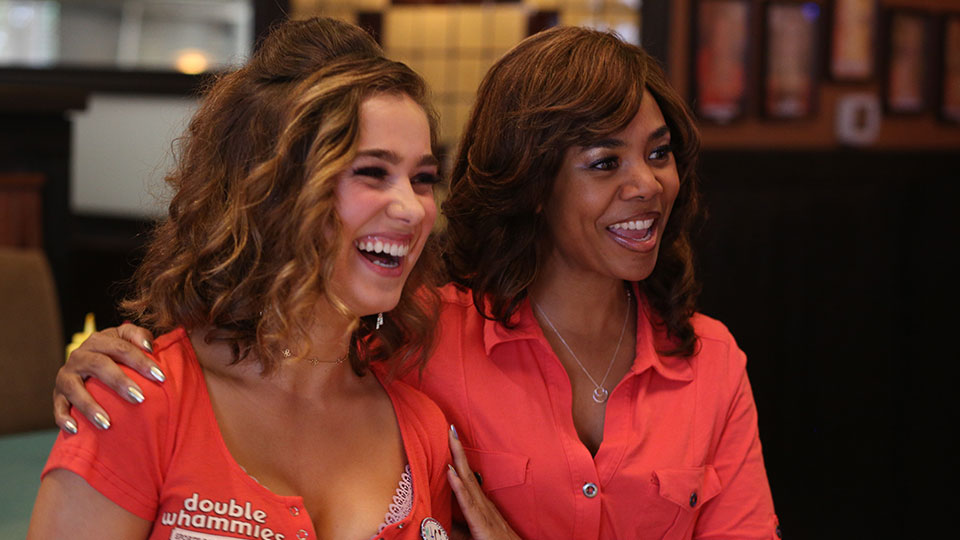 We’re all familiar with the setting of Support The Girls. Those American Hooters-style, motorway-side “breastaurants” whose specialty is not the food, but rather the well-endowed waitresses in crop tops and cut-offs serving up a distinctive brand of unsexy sex with a side of buffalo wings.

It’s here we meet Lisa (brilliantly played by Regina Hall), the manager of Double Whammies – a supposedly-but-definitely-not “family friendly” version of such establishments. It’s the start of a new day and she’s crying outside in the car park. She’s the mother hen of this hangout and fiercely loyal of her crew of servers, handling everything thrown at her with saint-like patience and a constant pained smile. Her infinite enthusiasm against the odds is both admirable and soul destroying.

We catch Lisa on a particularly bad day. Her boss has made a rare appearance with the sole intention of giving her grief, the cable is out on the bar’s many jumbo screens and the customers are getting cranky. Outside of work, her personal life is a complete mess.

It’s here when Support The Girls comes into its own; the sisterly bond created by writer-director Andrew Bujalski between the staff in this den of iniquity is the film’s core. Valiantly led by Lisa and brilliantly supported by the peppy Maci (Haley Lu Richardson) and no-nonsense Danyelle (Shayna McHayle), the staff always have each other’s backs as they navigate the quiet and occasionally dark aggressions that lurk around every corner, both in and out of the workplace.

Things unravel to even lower lows for Lisa to a point where you almost forget Support The Girls is supposed to be a comedy. Belly laughs won’t be had here but there is plenty of charm to be found in the small incidents and common struggles faced by all of us, especially women.

Bujalski – famous for his intimate, indie “mumblecore” style forged in the 2000s – ensures the film’s message of support never feels self-congratulatory: a rare moment where Hollywood-style empowerment takes a backseat in favour of something much more affecting.