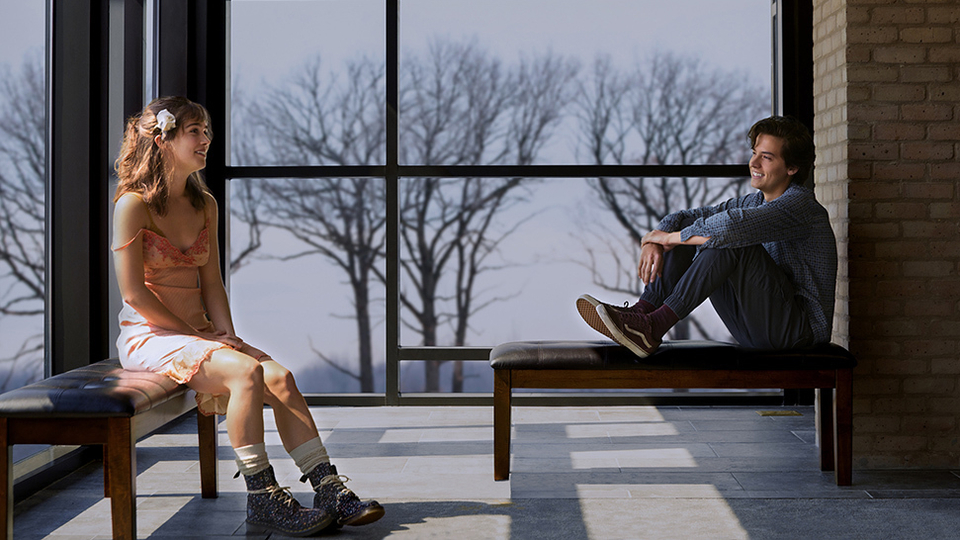 Five Feet Apart is a very engaging young-adult romantic drama that tugs at the heartstrings and delivers on every level. Blessed with a wonderful ensemble and assured direction from Justin Baldoni, the film shines a light onto the daily struggles faced by Cystic Fibrosis patients whilst delivering a very engaging and profoundly romantic love story to get behind.

There are a lot of facts about Cystic Fibrosis that you’ll learn whilst watching the film and Five Feet Apart gives audiences a fascinating and detailed look at the day-to-day lives of its patients – something I’ve not seen in a movie before. But crucially, it doesn’t rose-tint things but instead delivers a realistic account of the massive toll the condition leaves on its sufferers.

This is a romantic drama first and foremost, but its desire to not shy away from the very real challenges of Cystic Fibrosis should really be commended. This kind of subject matter requires two very strong leading turns to get the emotional pull required, and in Haley Lu Richardson and Cole Sprouse, they have found a modern day Romeo & Juliet that excel in every single scene.

Stella (Richardson) is a Cystic Fibrosis sufferer who has a positive outlook on life. It’s a genetic condition that causes build up in the lungs and digestive system. Her daily regime helps her handle the situation, and she is very well versed in how to cope with the challenges that present themselves as a result of the condition. Whilst on the hospital ward during a treatment session, she meets Will (Sprouse), a fellow Cystic Fibrosis sufferer who is undergoing his own treatment regime, but who doesn’t seem to share her positive outlook on life.

Cystic Fibrosis patients are not allowed to be any less than six feet apart from one another because of the risks of cross-infection – meaning that they can never touch one another. As Stella makes a deal with Will to be more controlled in his treatment, fate intervenes and the two find themselves drawn to one another. But how can they be in a relationship when the constraints of their conditions do everything to keep them apart?

I’ve been a massive fan of Haley Lu Richardson for some time, so to see her finally lead a big movie is so great. After such strong performances in The Edge of Seventeen, Columbus, The Chaperone and the TV series Recovery Road, Richardson truly shines here and delivers a strong leading turn that places her as one of the best actresses of her generation. Stella is a wonderful character, driven by her optimistic outlook in life and who uses her daily routine as a kind of coping mechanism. Richardson brings tremendous warmth and relatability to the role and is forever engaging onscreen.

Cole Sprouse, who most will know as Jughead from Riverdale, is also known to a generation as Ben (Ross Gellar’s son) in Friends. He has grown into a fine actor, with a great mix of charm and mystery that makes him a perfect candidate to play Will. The role could very easily have just been set-dressing but the assured script by Mikki Daughtry and Tobias Iaconis affords Sprouse a real opportunity to show the world what he can do. He hands in a great performance and conjures up some very effective chemistry with Haley Lu Richardson. They both shine on-screen and become star-crossed lovers for a new generation.

The film has a great ensemble too, with Moises Arias quite excellent as Stella’s best friend Poe. He has his own challenges to work through, and his back-story was a great addition to the film. Scenes involving Arias, Richardson and Sprouse really give the film an emotional punch with all three handing in standout performances. Kimberly Hebert Gregory and Emily Baldoni give the roles of the nurses depth and purpose, and there are good supporting turns for ER’s Parminder Nagra, Claire Forlani and Cynthia Evans.

Director Justin Baldoni is known to most as Rafael/Justin in Jane the Virgin. He is clearly a filmmaker who has positivity at the forefront of his vision, and he has created a gorgeous-looking film in Five Feet Apart that has so many beautiful scenes that truly capture the magic of the story. It’s shot so well, from the hospital sequences to the outdoor scenes (which I won’t go into now to save on spoilers). His company Wayfarer Entertainment and his inspiring documentary series ‘My Last Days’ has shown that he is a man who is seeks projects of real worth. Baldoni is a genuine talent who is on the rise and I can’t wait to see what he does next.

We have had a lot of young-adult romantic dramas recently such as The Fault in Our Stars, Now is Good, Everything, Everything and Midnight Sun, but Five Feet Apart really does feel different. There’s a sincerity here that permeates every fibre of this film. It proudly wears its heart of its sleeve and the end result is a film that will stand the test of time. A stirring drama and a sweeping romance that’s both heartfelt and sincere, Five Feet Apart embraces your soul with a deeply moving story with a huge heart. It’s the greatest love story of the year so far.