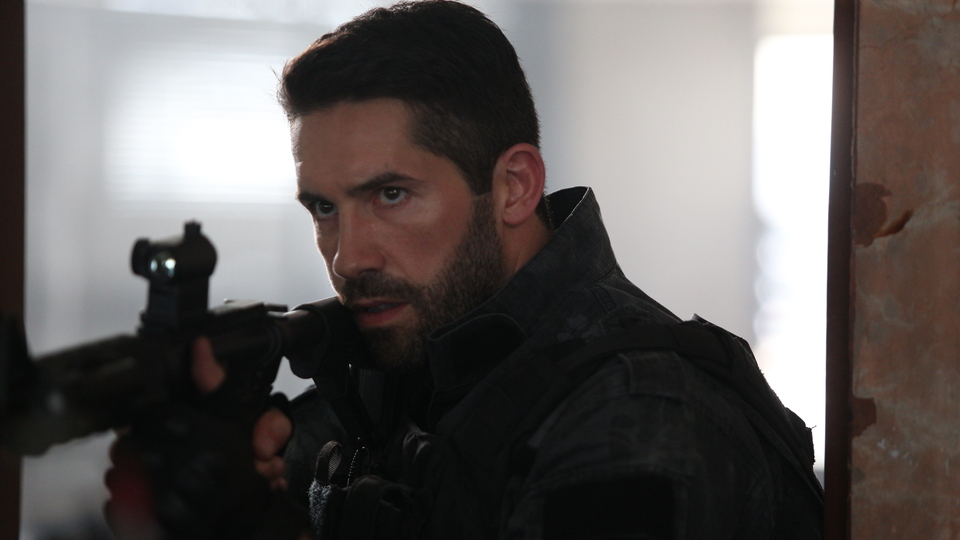 Scott Adkins stars in the action epic Triple Threat – and it’s the stuff of martial arts dreams. Triple Threat, which is out now on DVD from Universal, features an ensemble like no other with a fantastic array of talent combining to create a fan’s wish-list of modern martial artists.

Triple Threat is the massive and eagerly-anticipated extravaganza that pairs Adkins up with screen action legends like Tiger Chen, Michael Jai White, Tony Jaa and The Raid’s Iko Uwais.

Scott is one of the hardest working actors this country has ever produced. In this latest project, he once again plays the bad guy in a high-octane action-fest with some incredible stunts and martial arts on show.

In Triple Threat, a hit contract is taken out on a billionaire’s daughter who is intent on bringing down a major crime syndicate. A down and out team of mercenaries must take on a group of professional assassins and stop them before they kill their target.

We got to chat with Scott about Triple Threat, working with this amazing ensemble, his thoughts on the new Batman casting, his favourite film of the year so far and his future projects.

It was pitched to me… we didn’t have a script yet but they wanted to do Tiger Chen, Tony Jaa and Iko Uwais in a film together. And then they talked about getting some westerners to be the bad guys. I was always a huge fan of Tiger Chen and Iko Uwais, but I’ve been a huge fan of Tony Jaa from Ong-Bak, which goes way back. So that was the main reason, as I’d always wanted to work with Tony Jaa, and I got to fight with Tony and Iko which was great! And once Jesse Johnson got onboard as director it was easy for me to get on the project.

With a cast this impressive, was there any trepidation in taking on the film? I take it there were no egos on-set, because the chemistry seemed to be perfectly balanced onscreen.

No, there wasn’t any egos on-set, and that’s honestly the truth. We all got on brilliantly and we had a laugh – actually it’s one of the most fun films I’ve ever worked on to be honest. But there is a level of competition. When it’s time to roll we do our very best, as well as making ourselves look good and helping each other look good.

You have to stay in peak physical condition all year round, but did you have to alter your training at all to prepare for Triple Threat?

Not really, we do this all year around so have to be ready should the opportunity come up. ‘Stay ready and you don’t need to get ready’, that’s my motto!

With so much talent assembled, what was your personal ‘wow’ moment from working on Triple Threat?

I really wanted to work with Tony, but when I found out that I’d be fighting Tony and Iko at the same time (and do quite well against them!) that was a wow moment! It just so happened in the script that I had to face them at the same time, and I thought ‘Wow, are they actually going to let me do this, haha!’ It was brilliant.

Well it’s tough to get everyone together, it can be quite pricey. If you take The Expendables for instance; back in the day Stallone should have worked with Schwarzenegger. The same people watch the same films. So when they do eventually make a film together, it has that wow factor… and everyone wants to see it. For our film Triple Threat, there’s certainly never been a martial arts ensemble as good as this. Never before.

You deliver the classic line ‘come and have a go if you think you’re hard enough’ before one of your match-ups. Was this you ad-libbing?

I think the director Jesse (Johnson) suggested it – we’ve used it in another film before too. We are both English and we like those ‘English’ sayings so we thought ‘let’s go football hooligan on it!’. You don’t usually hear that in a martial arts movie!

You have an easy short-hand with Michael Jai White onscreen and your scenes together always feel organic. What’s it like working together and how would you say you complement one another when onscreen together?

Yeah me and Mike go way back to 2005 in Undisputed 2, and we remained very good friends ever since. I recently did my passion project Accident Man, which Jesse directed, and Mike came down and did me a favour by being in that. He’s a great guy, and we get on brilliantly. If I’m in LA and there’s a UFC fight on, I’ll go to his house to watch it. He’s a smart, clever guy and he makes me look better, if I’m honest! It’s easy to work with him – the fights, the acting, directing he’s so experienced and he makes it so easy.

Tell us about working with Fight Choreographer Tim Man?

Yeah, Tim is my go-to fight choreographer. Actually I was instrumental in getting him onboard. He worked on Accident Man, and I said to Jesse we’ve got to try and get Tim Man on Triple Threat. And we were able to do it – he is amazing. He’s the Man, as they say!

There’s a great scene when you literally fly across and jump onto a moving car and attack the windscreen. Was this a complex scene to put together?

Your square-up against Iko Uwais was a real highlight for me. The fight seemed to be at a quicker, more frantic pace too, was this a conscious decision based on your fighting styles?

You can’t help but speed up when Iko gets going! He is so fast. Both he and Tony have different styles. Tony is very acrobatic and agile but is extremely powerful. Then you have Iko who is intricate, and speed is the main thing. And he has very complex and quick moves. But they are just so humble and nice people. They want to support everyone, and they want to make me look my best. And they usually choreograph their own fights, but they were happy to say ‘Tim, what do you want to do?’ They were just really accommodating.

Any plans to work with these guys again in the near future?

Nothing concrete at the moment, but we have stayed friends and we would love to. And I’m sure if the opportunity presented itself we would. I work with Jeff (director) quite a lot, so yeah, I’m sure at some point that would likely happen.

When we last spoke you mentioned that you’d like to work on a western or a ‘King Arthur’ style epic film. Any news on that front?

I just had an idea yesterday actually about a medieval one. These things take a few years, but I’m working on it. I’ve got a lot of ideas to be honest – at the moment that’s at the back of the pack right now, but hopefully one day.

One thing I noticed in the opening credits was that you got the coveted ‘And… Scott Adkins’ credit at the end of the cast-list. Was this the first time you’ve had that credit on a film?

Erm, maybe, yeah! ‘Where are you going to put me in the credits because there’s so many people…!’ so we managed to get the ‘And…’ one. I guess I am the boss of the bad guys so it does make sense, but yeah I managed to twist Jesse’s arm to get that! It was all good!

You made a convincing case to become Batman with an audition reel that went viral. How did that come about, and what do you make of the news that Robert Pattinson will take on the mantle next?

Well, I’m sure he’s going to do a great job and I’ve not seen a lot of what he’s done to be honest, but I do really like Matt Reeves as the director. He’s obviously seen something in Robert and we all just need to shut up and not say anything until we see what they do! Regarding my audition, I read a few things in a few places that said that I put my audition out, and that’s kind of frustrating. I would never have done that! The whole thing shouldn’t have got out, but it did, so what can you do? That audition was for the Batman that Ben Affleck ended up playing.

What movies have you seen this year that have left a mark on you?

Erm… I don’t know… I can’t think of anything that’s really blown me away! I did like A Star is Born. It’s amazing when you see Bradley Cooper starts singing, and playing the guitar, and he directed it… what is going on with this guy! He was great – his voice was different and his physicality was different. And Lady Gaga was a revelation, she really impressed me. I know everyone says the same thing, but yeah, off the top of my head A Star is Born.

Can you tell us about your upcoming plans?

I’ve got Hitman 4 coming out which is a martial arts film with Donnie Yen. Avengement has just come out which is a gritty, British crime-thriller and that’s directed by Jesse Johnson and is getting rave reviews, so check that one out. I’ve got a comedy coming out called ‘The Intergalactic Adventures of Max Cloud’ – a sci-fi action comedy! A bit new to me – broad comedy! So we’ll see how that one turns out, hopefully I haven’t embarrassed myself!

Triple Threat is out now on DVD from Universal Pictures.