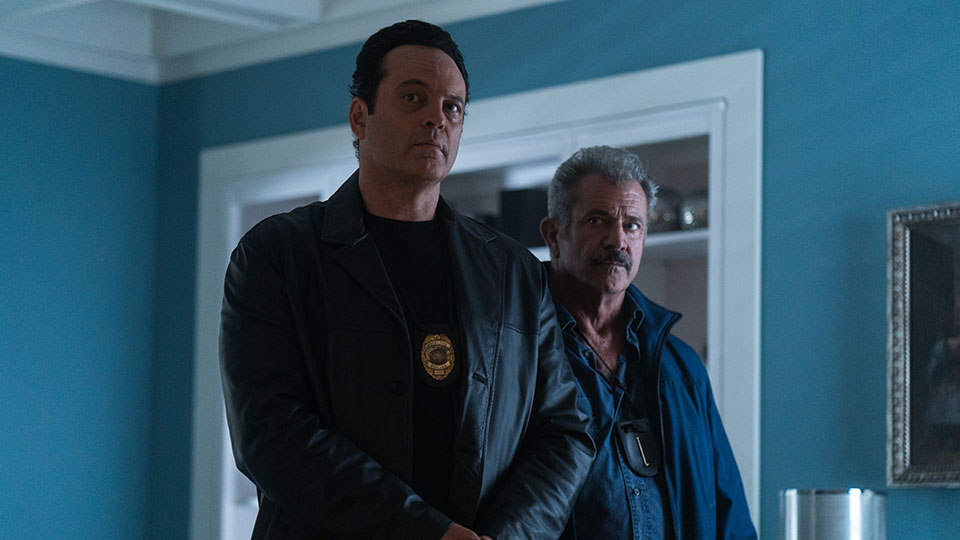 There’s an uncomfortable streak of nastiness in S. Craig Zahler’s Dragged Across Concrete, a pitch-dark cop thriller with a nihilistic heart. Hardly a surprise from the man who brought us Bone Tomahawk and Brawl in Cell Block 99, but this may be his bleakest vision yet. Featuring subdued and ice-cold performances from Mel Gibson and Vince Vaughn, this grisly slow-burning drama builds to an incredibly well constructed third-act, and as we’ve come to expect from Zahler, an explosion of brutal violence.

After the pulpy grindhouse thrills of Brawl in Cell Block 99, he now turns his attention to another genre staple, the heist movie. But be warned, this is no Ocean’s 11 style caper. Brett Ridgeman (Gibson) and Anthony Lurasetti (Vaughn) are police detectives in the fictional city of Bulwark. When they are caught on camera brutalising a suspect, they are both suspended without pay. Both men have financial burdens, so Ridgeman decides to utilise his criminal contacts to set up a job that will keep them afloat until they are back at work.

They assume the job will involve ripping off drug dealers, but instead find themselves up against a far more professional and dangerous outfit. Meanwhile, Henry (Tory Kittles) has just gotten out of prison to find his mother addicted to drugs and turning tricks to make ends meet. He immediately resolves to get back in the game, and his childhood friend Biscuit (Michael Jai White) has heard of a job going down that they can both make some money from.

As these two stories slowly and inexorably wind themselves towards each other, Dragged Across Concrete takes us on an extraordinarily bleak and nihilistic journey. It’s a dark and ugly story, set in a grim and terrible world, and populated entirely by morally repugnant characters. It’s a tough ask for the audience to sit through this for 159-minutes.

Zahler constructs the film in an incredibly confident way, with a detached and muted style, and intentional sense of artifice to the whole piece. The scenes are staged in unfamiliar ways, and there’s an oddly mannered pulp cadence to the dialogue, but without any of the slick style of actual pulp fiction. No one speaks like this in real-life, or in the fiction we are used to. Just like the pacing of the film, which is unhurried to say the least, everything is designed to throw you off.

The running time is insane. I genuinely admire Zahler’s commitment to his craft, and his painstakingly methodical storytelling, but this is a real strain on your patience. He gives every scene so much time to breathe, and every character an inner life and backstory, and it’s admirable to a point. But you have to ask, what does the film achieve by playing the long game, that it couldn’t have done if it was 40-minutes shorter? And the answer is nothing.

But if you think the running time is problematic, you ain’t seen nothin’ yet. Dragged Across Concrete takes an uncomfortably provocative look at attitudes towards race, gender, and political correctness. This is where the film really falls down for me. Yes, the characters are vile, but that is fine. There is no problem having unlikeable and racist characters in your film. But there’s no subtext or wider thematic comment to their casual bigotry. They’re just bigots. Ridgeman and his wife complain about living in a black neighbourhood, and all we are shown of this neighbourhood is a scene of his daughter being assaulted in the street by a group of African American kids. The film seems to essentially justify their racism, and I personally found it extremely uncomfortable. Perhaps this was Zahler’s intention.

The Blu-ray disc comes with an in-depth featurette titled Elements of a Crime. This is broken down into three chapters, Criminal Intent, Criminal Act, and Criminal Concurrence. Each part explores the making of the film, featuring interviews with all the key creatives and cast members, and behind the scenes footage from the set. There’s also a short featurette about the difficulties they faced getting the film made in the current climate of franchise driven blockbusters.