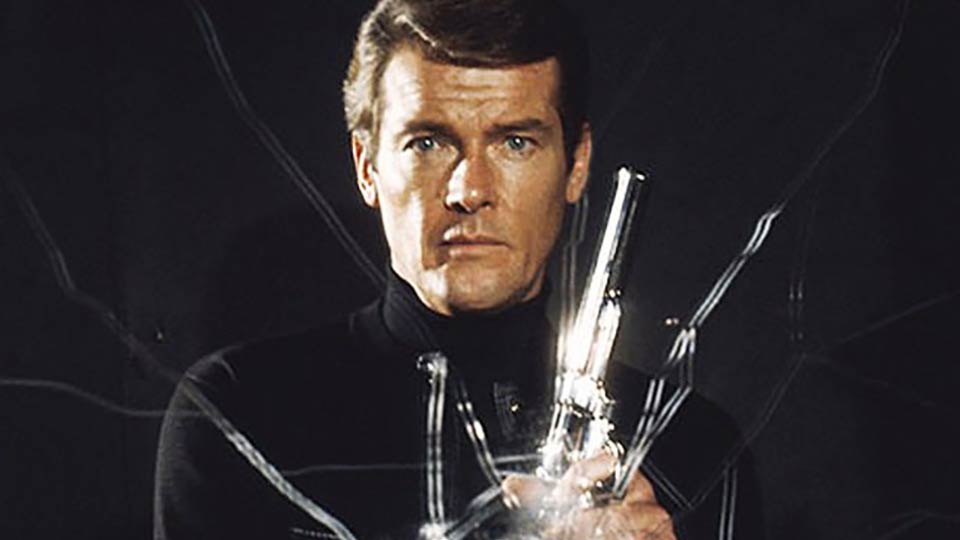 Sir Roger Moore so far holds the record for having played James Bond in more official films than anyone else (Sean Connery’s 1983 spoof Never Say Never Again not counted). Though Daniel Craig – the incumbent Bond who has been announced for a fifth film, has technically played the role longer than Sir Roger’s twelve year stint, which lasted from 1973 to 1985, as it is now 14 years and counting since his casting!

There will always be great debates to be had about the merits and demerits of every actor who played Bond, but no other actor has yet had the opportunity to play the super spy as many times as Sir Roger Moore.

Join us on our roundup of Sir Roger’s seven Bond movies, as we rank them in reverse order, and consider what he brought to each film that made his tenure so special, and so enduringly popular.

By quite some distance the weakest entry in Roger’s remarkable run of Bond movies. This is sad, since A View to a Kill came right at the end of Roger’s tenure. By that time, the years were catching up on our leading man. Roger, whose heyday was the 1960s and 70s, was a touch out of place by 1985, by which time he was closer to 60 than 50. With a great, compelling, original story, it wouldn’t matter so much that Roger was too old by then for the audience to suspend disbelief. But with a weak and occasionally dull story involving a threat to Silicon Valley, it’s easy to be distracted by Roger’s lacquered hair and slightly startled expression. There is no chemistry at all between Roger and Tanya Roberts (whose mother was younger than Roger), and non-actor Grace Jones (May Day) caused problems on set.

Worst of all, it’s quite boring in places, not least during the race course scenes. On the plus side, Christopher Walker is highly entertaining as he chews the scenery as the principal villain Max Zorin. It’s lovely to see the affable Patrick Macnee of The Avengers-fame team up with Bond, and he makes for a memorable ally. There are one or two great set pieces – the escape from the flames in the lift shaft and the fight on Golden Gate Bridge among them. Yet the modernising efforts (theme song by Duran, Duran, technology-based plot) are at odds with an actor who had been long enough in the part that it became impossible to imagine anyone else playing it, and was familiar, cuddly and dependable. After going out on A View to a Kill, it’s little wonder that Timothy Dalton’s dark, brutal Bond felt like a glass of cold water in the face, it was so shockingly different yet just around the corner.4/10

Roger’s penultimate Bond movie is divisive. Some can’t forgive the fact that Bond saves the day whilst dressed and made-up as a clown. They say that was putting the tongue too firmly in the cheek and sending the franchise into a parody of itself. Others point out that Bond is trained to go undercover, and he simply used the costume at his disposal. Plus, clowns are creepy.

That aside, Octopussy is a mixed bag. There’s a strong opening sequence involving a dead clown and a Faberge egg. There’s a decent atmosphere of Cold War paranoia built up by director John Glen. Yet the structure of the film doesn’t quite work. There’s a long and tedious sequence in which Bond tries to thumb a lift (how did that make it to the final cut?), and the brilliant Steven Berkoff is sadly wasted as the main supporting villain. Yet the film sequences in India are terrific, and the locations still trade on their connection to the world of James Bond.

Louis Jourdan tries to out-smooth Roger Moore as the villainous Khan (they were all the rage in the early 80s after Star Trek’s Wrath of Khan), and Indian tennis star Vijay Amritraj makes a surprisingly decent stab at playing Bond’s ally. A lot to enjoy, but the first half is much stronger, and the damp squib ending leaves a lot to be desired. 5/10

Roger Moore’s second outing as James Bond followed very quickly on the heels of his debut in Live and Let Die, cashing in on his immediate appeal as someone who, unlike George Lazenby, had the charisma to successfully follow Sean Connery and establish a new persona for the character. There are several aspects that go strongly in the favour of The Man With The Golden Gun.

Firstly, Roger Moore himself. Still slim and full of vigour, he’s a convincing man of action as well as a fantastic leading man. Secondly, he’s paired against the iconic Christopher Lee, who, as Scaramanga, is easily one of Moore’s best-remembered adversaries. The lugubrious Lee – also a fine actor – brings the best out of Moore. Thirdly, the locations, especially in and around Scaramanga’s island lair, are stunning (an island in Thailand). Fourthly, the stunningly beautiful Britt Ekland is a memorable Bond girl (and Maud Adams would later return in a more substantial role in Octopussy). On the downside, the cast of characters is as slight as the plot.

It’s easy to summarise the entire film in one or two sentences. The showdown in Scaramanga’s funhouse is hardly one of the franchise’s great set-pieces, and by the end of the movie, the viewer is left underwhelmed. With time to develop a better script, The Man With the Golden Gun might have been a lot better. 6/10

James Bond in space! 1977’s runaway blockbuster success Star Wars changed the direction of cinema, and even influenced James Bond. True enough, Hugo Drax, the villain of the piece, even has a rocket in Ian Fleming’s original novel, though James Bond’s feet stay resolutely on terra firma. As an indication by the extent to which the film franchise had departed from the original literary source material, 1979’s Moonraker bears virtually no resemblance at all to the book, save for the name of the villain. Moonraker is a game of two halves.

The first hour of the film, in which Bond gradually pieces together Drax’s nefarious plot (the villain is played by Michael Lonsdale) which takes Bond from France to Venice via Rio de Janeiro, is a satisfying slice of espionage punctuated by tongue-in-cheek silliness (double-taking pigeon, anyone?) The second half, in which Bond follows Drax into space, is as hokey as the franchise ever was, the most embarrassing excesses of the Pierce Brosnan era aside.

That said, the set design of the space station by Ken Adam are breathtaking and impressive. It’s just a shame that the action on screen doesn’t entirely live up. Still, it’s heartwarming that Jaws (Richard Kiel) finds love. 7.5/10

This is easily the most unusual entry in Roger Moore’s entire run. It followed immediately after Moonraker, and whereas the earlier entry had been the most outrageously camp and silly of the Moore movies, For Your Eyes Only is, by contrast, by far the most sober and gritty. It’s almost possible to imagine switching Moore for Timothy Dalton and having to make few other changes to accommodate the different leading man. The exotic locations are largely gone.

Instead, the action mostly takes place in Greece, in and around a working monastery, though there are some terrific underwater sequences. Fresh from his adventure in Flash Gordon (alongside future James Bond Timothy Dalton), Topol joins Moore as Milos Columbo, a great Bond ally. Julian Glover has plenty of smooth charm as the villainous Kristatos, and contemporary Cold War history is brought into the plot. As the KGB’s General Gogol puts it, “You don’t have it. I don’t have it. That’s detente.” The scene in which Bond ruthlessly disposes of one of Kristatos’ goons, played by Michael Gothard, kicking his car from a cliff edge, is easily Moore’s most cold-blooded moment in the part. So far, so good.

The only real downside is the presence of Lynn Holly Johnson as Bibi, a sixteen year-old ice skater. Although Carole Bouquet plays the main love interest for Bond, and Bond gently disentangles himself from the attentions of Bibi (Moore was fifty years old at the time), it does leave a bad taste in the mouth, especially in modern times. Look out for Cassandra Harris (Pierce Brosnan’s then-wife) and Charles Dance (often touted as a potential Bond) in supporting roles. 8/10

Roger Moore hit the ground running with his James Bond debut. He looked every inch the part: tall, slim, handsome and commanding. He also exuded confidence and charm. His was a much smoother Bond than Sean Connery, who had embodied Ian Fleming’s idea of a “blunt instrument”. Moore was keen to carry on the trend, most explicit in Diamonds Are Forever, of introducing a camp quality to the films.

This cinematic outing follows by and large the plot points of the novel, as Bond closes in on the machinations of Harlem drug baron Mr Big (Yaphet Kotto). There are accusations in the current era of “blaxploitation”, with sinister elements of voodoo, especially brought out by the character of Baron Samedi, but it does all serve to take Bond out of his comfort zone. In doing so, it pits him against a great villain, with some truly memorable henchmen, not least the claw-armed Tee Hee Johnson. There are some fantastic set-pieces, such as the speedboat chase, the escape from crocodiles and the fight on the train, which make Live and Let Die vintage James Bond.

It also takes Bond to Felix Leiter’s home country of the USA (David Hedison would return to the part opposite Dalton in 1989’s Licence to Kill). Add in one of the most iconic theme songs (by Paul McCartney and Wings), and you have a near-perfect film. Perhaps its only flaw is that the brilliant Jane Seymour is a touch underwritten and underused. 9/10

Roger Moore’s third outing as Bond is pretty much perfect entertainment. It has all the ingredients of classic James Bond. You have great villains (Richard Kiel’s Jaws is introduced), fantastic locations (the Great Sphinx of Giza!), and Roger Moore not only looks at his best, but has nailed by part by his third film. Marvin Hamlisch’s score is pretty good too, especially the Bond ’77 disco entry.

This is the movie that has Bond dropping off the edge of a cliff on skis, only for a Union Jack parachute to rescue him; a Lotus Esprit that turns into an underwater submersible, and some truly impressive cinematic sets (Ken Adam again), especially inside Stromberg’s lair where he holds stolen submarines. For The Spy Who Loved Me, absolutely everything fell into place for the production.

The story is entirely invented, owing nothing at all to Ian Fleming’s novel (thankfully, as it’s ironically easily the worst book he ever wrote). Ridiculously good fun, and Roger Moore at the peak of his powers. 10/10

Do you agree with our verdicts? Tweet us @entfocusfilm. One thing’s for sure, Sir Roger Moore, who left us two years ago, aged 89, will be remembered and revered for many generations to come, thanks in no small part to his time as James Bond in these very special films.

In this article:James Bond, Roger Moore