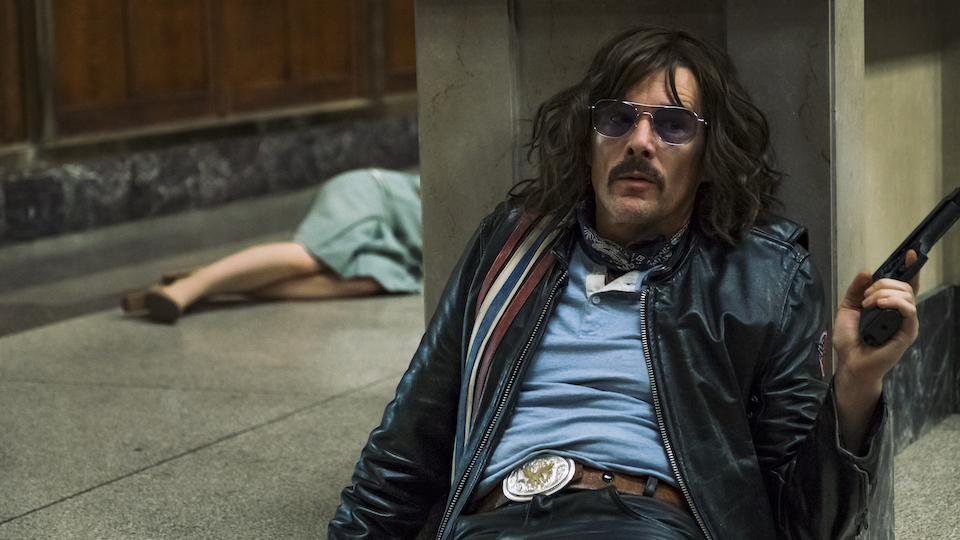 Originally titled Stockholm, this absurd take on a true-life incident draws inspiration from the hostage situation in 1973 that gave rise to the term ‘Stockholm Syndrome’ – the strange condition where people being held hostage develop emotional and psychological bonds with their captors. Writer-director Robert Budreau has taken the essential components of this true story and delivered a fun but fairly lightweight crime thriller, which receives its UK premiere this week at EIFF as part of the American Dreams strand.

The Captor is one of those stories that is too weird to take seriously, so a fairly irreverent tone is adopted, and the whole thing is played for laughs. From the moment Lars Nystrom (Ethan Hawke) puts on his wig and cowboy hat and strolls into the biggest bank in Sweden carrying a machine gun, you can sense the kind of Coen-esque haplessness that Budreau is going for. Lars sees himself as a rock and roll outlaw, dressed in biker gear, and constantly playing music on his portable radio. He’s like an Easy Rider cosplayer who never saw the film.

Once he’s inside the bank he starts taking hostages and making demands. He wants his friend Gunnar (Mark Strong) released from prison, he wants money, and he wants a getaway car. Specifically he wants a Mustang like Steve McQueen drove in Bullitt. Whilst a media circus builds outside the bank, something even stranger is happening inside. To the dismay of the police, the hostages begin taking sides with the criminals.

Budreau does an excellent job evoking the period detail, and the film looks fantastic as a result. All of the interior scenes have the sombre tones of the 70s, whilst the exterior shots make Stockholm look absolutely beautiful, bathed as it is in that gorgeous, glowing northern European sunshine. The vintage cuts on the soundtrack complement the look and feel of the film. The star attraction however is Ethan Hawke’s manic performance as Lars. His innate charm as the naïve and sensitive criminal carries the film through all its weirdness and implausibility, and he is definitely the main reason to watch this film.

Ultimately, the film isn’t really funny enough to be a comedy, or thrilling enough to be a thriller, but The Captor is still a fun and very watchable caper. A well-made little crime flick, with a terrific cast, and a fabulous central performance from Ethan Hawke. It’s not going to change your life or challenge you in anyway, but it’s a thoroughly entertaining and diverting way to spend 90-minutes.