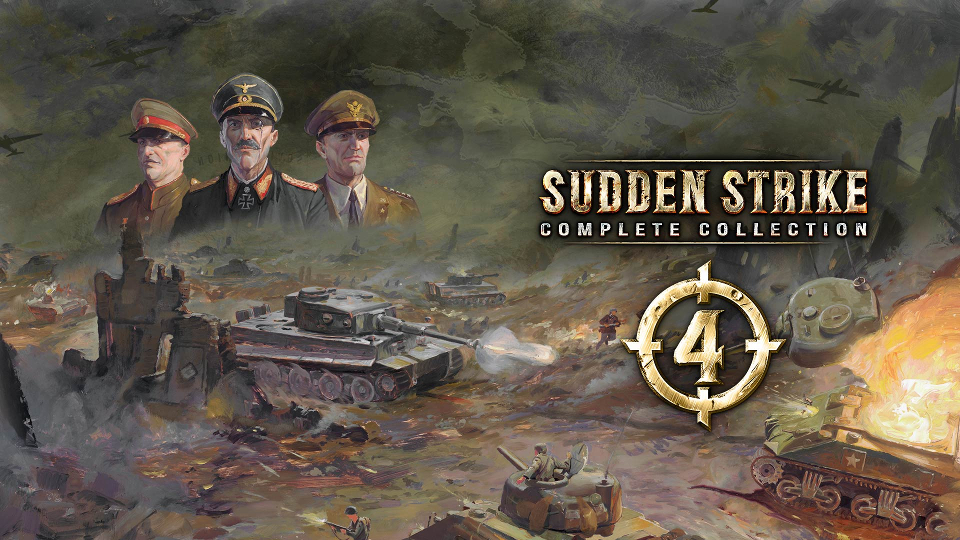 Sudden Strike 4: Complete Collection is an RTS set in WWII. The base game was released in August 2017 and since then there has been plenty of DLC released. The Complete Collection bundles all of this together and includes all five DLC expansions: Battle of Kursk, Road to Dunkirk, Finland – Winter Storm, Africa – Desert Storm and The Pacific War.

This new edition provides unbeatable value for money with over 45 missions spread across 11 campaigns. There are more than 20 historic commanders offering various perks and abilities for your forces, and more than 200 different units to command as you battle on all sides of the historic conflict. The collection also includes a selection of competitive multiplayer modes and all the free updates, additions and improvements made since the original release.

The WWII RTS genre on PC is a pretty crowded one with games such as Men of War and Company of Heroes leading the pack. So does Sudden Strike 4 bring anything new to the table to set it apart from the rest of the pack? To be honest, the answer is no. But whilst it isn’t reinventing the wheel nor is it a bad game, in fact far from it.

Sudden Strike sticks to the basics of RTS games and for the most part, gets it right. There is no base building, no production queues to manage and no options regarding what tools you bring to war. In each mission, you are given a set number of units in order to the job at hand which means every unit lost is going to make things much harder for you. I’m glad the game took this approach as it makes every trooper, truck and tank incredibly valuable and forces you to think about every single move you make.

With there being so many different locations to choose from in the Complete Collection I was concerned that the maps might all blend into one but I needn’t have. Each map stands out from the rest and they all look beautiful, especially the wintery ones. The animations of the units are also very detailed and help to immerse you in the situation. When your infantry come under fire they immediately drop to the ground, when shot they writhe around on the floor hoping that a brave medic will get to them before they bleed out and your tanks will explode gloriously once destroyed.

Missions in the game are pretty standard, they range from going to point A and take it from the enemy, defend a certain point from attack or escorting vehicles. Whilst these are run of the mill tasks, the tactics involved in completing them elevate them to a new level.

Sudden Strike is hard even on normal difficulty and you are forced to think about every situation. On my first mission, I simply charged headlong towards my objective with all of my troops and was mowed down by a far inferior force due to the fact that they were positioned effectively and I wasn’t. Keeping your infantry in cover and using buildings is crucial as they are very vulnerable, and if your medic gets taken out they will be dead in no time.

Similarly, your armour is equally vulnerable, if you simply charge headlong into every situation they won’t last long. Yes, you have repair trucks that can help somewhat but these are extra squishy and sending them into a firefight to repair your tanks is asking for certain death. Using your infantry to scout areas or aerial recon if available is a much better tactic, especially if you have artillery. Infantry can spot enemies and then you can rain death from above, move in with your tanks and use infantry to mop up the stragglers.

Other tactical elements include aerial recon, bombing or strafing runs, paratrooper drops and naval bombardments. You only have a limited number of these per map so it’s vital that they are used at the correct times on the correct target. I found the bombing and strafing a bit fiddly to get right and would often see my planes firing rounds just next to where to the enemy was rather than where I thought I had chosen. I did get better at this but found the attack planes particularly frustrating to get on target.

The weakest area of the game has to be unit pathfinding and the unit formation choices. The pathfinding abilities of your units is poor and gets worse the more units you select. Tanks and boats will happily ram into each other over and over with no progress being made. It’s a small point but can bog down your troops and lead to them being wiped out if you need to act quickly.

The formation choices are pre-made and can be chosen by dragging the mouse around your desired location. I found this could often be inaccurate. For instance, I could be trying to move my infantry whilst keeping them in cover, the formation template would show that they would end up in cover but on completion of the move order, some troops wouldn’t be where I expected them to be. Whilst this doesn’t sound like much of a problem it can mean the difference between your units getting spotted or not.

To sum up, Sudden Strike 4: Complete Collection is a good, solid RTS game. It forces you to think tactically about every single situation and will challenge even the most experienced RTS generals out there. It’s also one of the few RTS games I’ve played where the lives of your units matter, with no base building your troops cannot be replaced. The sheer value on offer here is also something that should make you take a look.