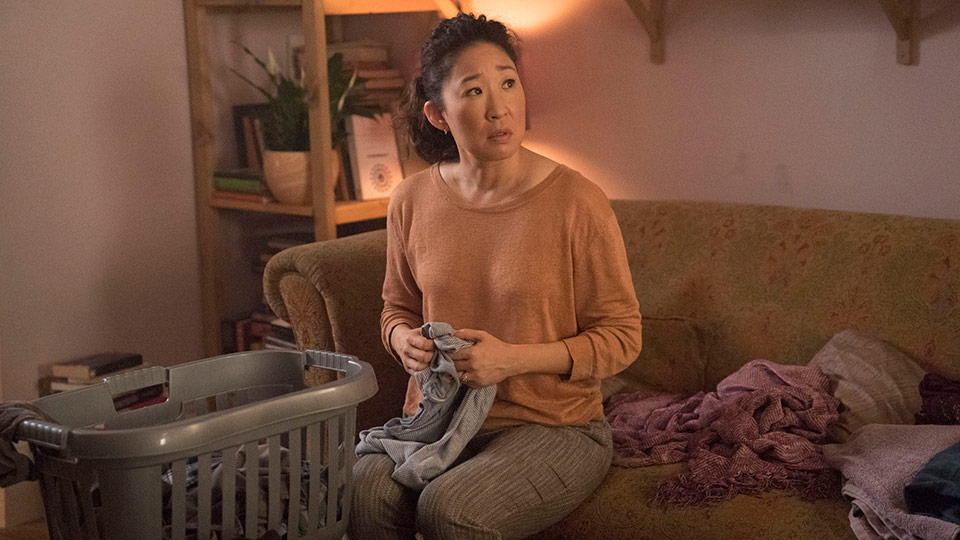 Killing Eve made its long-awaited return in the UK tonight on BBC One and the first episode of season 2 picked up 30 seconds after the end of season 1.

If you want to avoid all spoilers for Killing Eve, stop reading this article now.

Following their confrontation, which ended with Eve (Sandra Oh) stabbing Villanelle (Jodie Comer), the crafty assassin made a quick getaway leaving Eve in her flat. As Eve attempted to leave the apartment building, she noticed that paramedics were on their way in and as she was covered in blood and holding the knife she stabbed Villanelle with, she quickly found somewhere to hide.

Once the coast was clear Eve made it out of the building but not before discovering the ‘paramedics’ were actually people after Villanelle and they killed someone in one of the other apartments. As Eve left the building, Carolyn (Fiona Shaw) called her but she ignored it. It was then revealed that Villanelle was hiding just outside the building and she saw Eve running past.

Shocked by what she’d done, Eve eventually answered the phone to Carolyn and was told to get back to London. As she confessed that she may have killed Villanelle, Eve realised she’d made the announcement in the middle of a couple getting engaged who were nearby.

Making her way to the train station, Eve got into the security line and put her belongings in a tray to be screened. She realised she still had the bloody knife on her so she ran into the toilets to dispose of it. When she returned she passed off her abrupt departure from the line as a ‘bad oyster’ and was allowed to collect her stuff and wait in the lounge.

As she tried to process what had happened, Eve was approached by a woman she didn’t know and initially she thought she was someone linked to Carolyn or Villanelle. It turned out the woman thought Eve was a junkie that needed help. Following that odd exchange, Eve made her way back to London.

Villanelle meanwhile tried to hitch a ride and when that failed, she threw herself in front of a taxi. The driver put her into the back of his cab and dropped her at the door of the hospital before speeding off.

When she woke up, Villanelle discovered her stab wound had been stitched up and that she had to rest while she recovered. The doctor told her of his intention to call the police and report her injury but she made up a story about being stabbed by an abusive husband who worked for the police.

Back home Eve called around to see if she could find Villanelle and when she couldn’t, she threw herself into making a roast dinner for Niko (Owen McDonnell), who was less than impressed when he arrived home to find Eve manic and evasive. Eve took a bath and continued to ignore Carolyn’s calls while refusing to tell Niko anything about what was going on.

In hospital Villanelle made friends with Gabriel (Pierre Atri) who had been in a car accident and suffered a nasty head wound. She manipulated him to steal a nurses costume so she could pass herself off as a nurse and snoop around the hospital. Looking for money, she was almost caught by a patient’s wife but she lied her way out of the situation giving a woman false hope about her husband’s condition while lifting her purse.

Eve gave in and went to meet Carolyn who tried to get information from her about what happened in Paris. Reluctant to give her the truth, and not sure who she was working for, Eve lied and told Carolyn that she hadn’t seen Villanelle. Carolyn responded by telling Eve that she wasn’t fired any more and asked her to accompany her somewhere.

Villanelle passed out and woke up in her bed. She took some clothes from Gabriel and he asked her to tell him the truth about his face. Taking off his bandages, she revealed that his face was terrible and as he cried on her shoulder, she snapped his neck and killed him.

Carolyn took Eve to a morgue where a contact of hers had exhumed the body of Alistair Peel, a man who had died two months earlier. Demanding an explanation, Eve was shocked to find out that Nadia (Olivia Ross) had slipped a note with Alistair’s name on it, addressed to Eve before her death.

Revealing that he died from an air bubble in his blood stream, Carolyn watched as Eve insisted that Villanelle was behind the murder. Eve pushed back to Carolyn asking for answers, and Carolyn responded by asking Eve plenty of questions about her obsession with Villanelle.

Villanelle pretended to be wheelchair bound and convinced the hospital guard to let her out for fresh air, claiming she’d had bad test results even though the hospital was on lock down after Gabriel’s body was found. She then made her escape and hitch-hiked to Calais before hiding in the boot of a family’s car so she could get back to London.

Niko appealed to Eve once again to tell him the truth about what she was up to and she responded by telling him she bought expensive windows from a telemarketer.

Killing Eve continues on BBC One Saturday at 9.15pm.