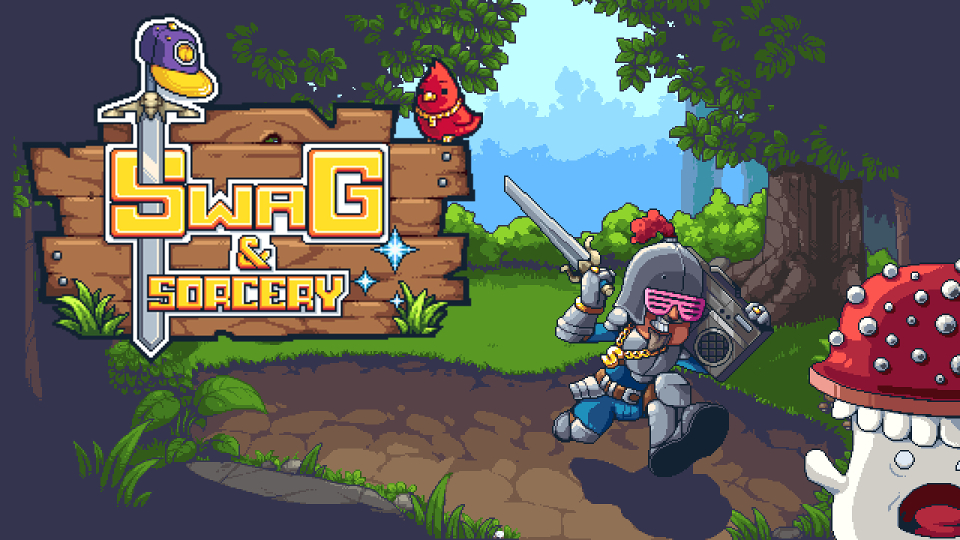 Developed by Uroboros Games and produced by Lazy Bear Games (Punch Club, Graveyard Keeper) comes Swag and Sorcery, a streamlined pixel RPG that’s firmly anchored in resource management. Head out on adventures with custom-equipped teams, bring back the goods and transform yourself into a fabulously dressed participant in your village fashion shows!

Resources are king and make the pixel world go round in Swag and Sorcery. To get them, you’ll have to grind in combat (as well as coming upon the occasional random text event–but even that you have to ‘win’). Combat consists of sending your handpicked adventurers out into various level-friendly areas. At first, these areas can be challenging, engaging and quite interesting to look at. Plenty of atmosphere and cute animations line the way, with some really neat character designs in the enemies as well. As grinding is a large part of operations, you’ll be going back to the same adventures fairly often, long after you’ve conquered and become strong enough to walk through with your eyes closed. Being able to run three separate adventures is helpful in this department though–and the option to minimize the active adventures in lieu of going back to your village to poke around with whatever else.

Watch the Swag and Sorcery launch trailer below:

Crafting is fairly straightforward. Raw materials get refined to eventually make useful items like potions, armour, and weapons. The buildings are upgradeable to allow for more options in these areas–and necessary for progression. It’s a cute way to be able to build your village from the ground up, eventually having the biggest and baddest version of each building with all the bells and whistles. In order to physically craft, you’ll have to pop one of your adventurers in, and the more they work, the more exhausted they become. In fact, all the adventurers face a bit of exhaustion, which is another stat to manage and can be taken care of at the Spa. It’s an adorable way to keep tabs on everyone and also gives you that one more thing to click on, if you enjoy that sort of thing. Find yourself out of money? Crafting is going to be the way to go. You’ll be using your grinding surplus of materials to make some quick coin as a side job…adventuring doesn’t exactly pull the numbers like it used to!

The ‘Swag’ bit in Swag and Sorcery comes from the interesting fashion competitions held in your village. Adventurers compete for the most aesthetically appealing armour, which, depending on the day could mean a number of things. Usually you’ll get a trendy colour to follow and hope for the best, as your opponents are randomized. Being half of the game’s title, it feels important to do these little competitions–and you’re even encouraged with the morale of the villagers being tied into your victories or defeats. Unfortunately, in the early game, I found that these fashion shows really took the backseat to grinding. Half obsessed with stockpiling and half not progressed enough to make what the judges want, the fees to get into the shows ended up getting spent more often on buyable buffs for combat. I do think that the more you gain wiggle room for financial and resource independence, the more you’ll have the option to participate, but like I said–I didn’t find it a priority and that’s a bit of a shame.

View some Swag and Sorcery screenshots in our gallery:

Swag and Sorcery is a busybody game with a strong hint of idling. Most of the time I played, I found I could tab out of it and come back having missed nothing. I don’t find this to be a bad trait though–even with some of the more mindless grinding, I felt compelled to keep going, the endearing qualities of the game pulling me in. You do want to progress, see your village get more refined, and level your characters–and even when you’re broke the balance of the overall game always gives you an out to gain back currency (be it coin, or resources) to trade back for what you want. It’s not too difficult to figure out and if you enjoy the steady build of rosters and buildings, then you’ll certainly find yourself fulfilled with this one!

Swag and Sorcery was reviewed using a digital code supplied by the publisher.