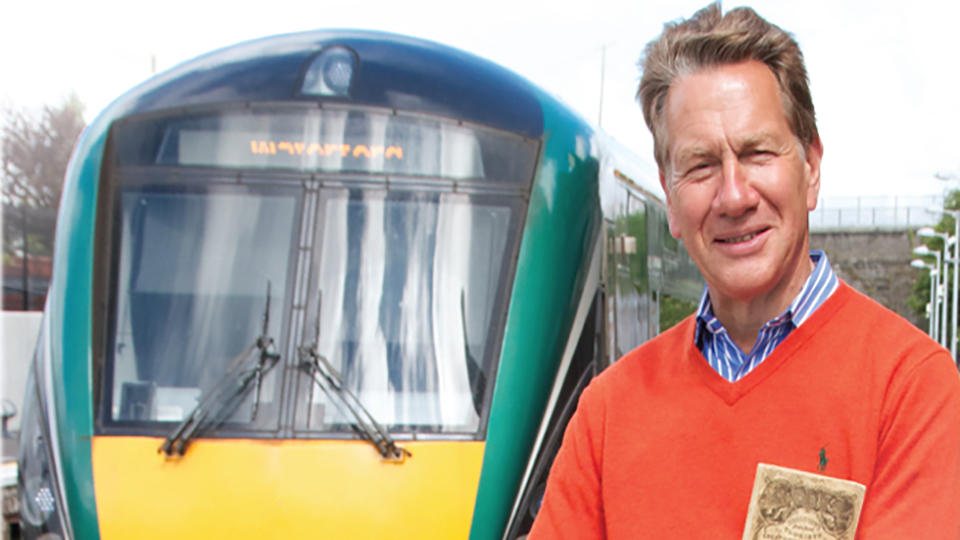 Do you love Great British Railway Journeys? Whether you’re hooked because you simply want to see what sartorial linen delights old smoothie Michael Portillo will be wearing next, or whether it’s to learn more about the UK’s fascinating network of villages and towns, or you’re a railway or history buff, you can now revisit every single episode of the show thanks to their release on DVD.

We recently took the train with Portillo for series 10 and thoroughly enjoyed this year’s offering.

If you want a little reminder of where Portillo visited in earlier seasons, then here’s a quick summary:

Portillo explores the secret ammunition factory at Gretna, sails the last steam boat on Lake Windermere, learns to talk ‘scouse’ in Liverpool, takes a dip in Bath Spa, cooks a traditional curry in Birmingham, tries his hand at oyster fishing in Cornwall and meets survivors of the Coventry Blitz.

Portillo witnesses all the things that have changed since the early days of rail transport and what still remains of Bradshaw’s Britain, discovering the effect the railways had on the public and finding out how the British love of trains all began. Michael samples some classic Cromer crab, gets a rare chance to drive a heritage diesel and gets up close and personal with a pedigree Hereford bull. He also discovers a secret World War II chemical weapons plant at Rhydmwyn.

Michael follows the route of the Great Eastern Line, which ventures from the edge of England, to the centre of the country’s financial capital London. He goes in the footsteps of Queen Victoria, following the railways she once rode from her castle in Windsor to the Isle of Portland on the south coast. Then he travels west, from Oxford in the heart of England, through the Malvern Hills and into Wales, with the unique Victorian heritage of the South Welsh coastline.

Beginning in the rolling Chiltern Hills, he makes his way through to the stunning Severn Valley and finishes at the Victorian seaside resort of Aberystwyth. He then travels from the centuries old naval hub of Portsmouth to the historic Grimsby docks. Later, he uses Bradshaw’s Descriptive Railway Handbook of Great Britain and Ireland to explore the Republic of Ireland from Killarney to Galway on the Atlantic Coast.

Portillo goes from Manchester, birthplace of George Bradshaw – the publisher of this trusted guide, to Chesterfield, burial place of George Stephenson, the father of the railway. He also has a painful encounter with a polecat in Norwich.

Michael tries his hand at curling, visits the birthplace of golf, gives an old engine a fresh start in Derby, explores London’s Highgate Cemetery, takes a trip to Lindisfarne, learns of the miners who fuelled the Industrial Revolution and explores the treasures of the Bodleian Library.

Portillo visits the home of Beatrix Potter and takes a ride on the very first passenger heritage line in Britain. He also hears tales from a Victorian tannery, discovers a very early white-knuckle ride, takes in an opera at Glyndebourne, and learns of the tragic events that would ultimately bring about the Victorian age.

London to Edinburgh
Blackpool to Harwich
Goes to Ireland: Wexford to Westport

Cromer to Brownsea Island
Whitland to The Lizard
Hull to Caernarfon

This complete ninth series sees Michael following in the footsteps of King Edward VII, investigating London’s newest rail tunnel, crossing the Solent with a ticket to Ryde, striking gold at the Royal Mint, discovering the departure point of Scott’s ill-fated voyage to the Antarctic, uncovering the birthplace of British aviation and boldly going to the moon by way of the Cornish Riviera Express!

Portillo travels from Warrington to Rye in the North West of England, stopping to try out clay spinning, restoring carriages for a heritage light railway and messing about on the Thames.