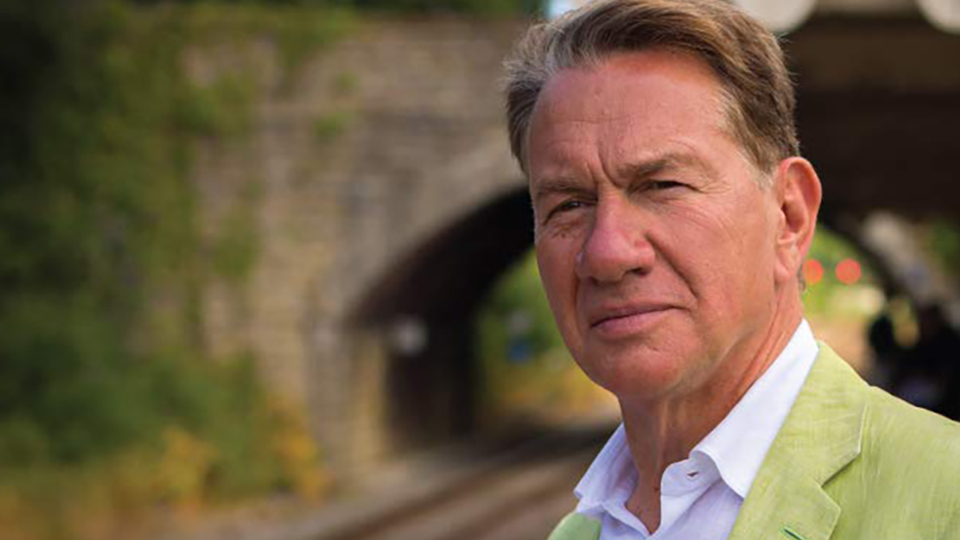 The word that springs to mind when describing Great British Railway Journeys – both in terms of its content and presenter Michael Portillo – is ‘charming’! It’s also rather compulsive watching. “Oh, just one more episode,” is generally the spirit you approach the series with, especially as they are neatly-packaged in half-hour bursts.

Freshly released to DVD is the tenth and most recent series, which aired earlier this year, though all ten seasons can now be revisited on DVD from Network. In the tenth series, you can experience all fifteen episodes over three discs as Michael Portillo, copy of his trusty Bradshaw’s Railway Handbook under his arm, embarks on more fact-finding missions in the towns and villages of the UK. In three separate journeys, Portillo sets foot in the towns and cities of North West England for a journey from Warrington to Stoke-on-Trent; heads north of the border to take in Newry to Argyll and Bute, and finally heads south to venture from Warwick to Rye.

What makes the series so great is that Portillo celebrates areas of the country that are so seldom in the limelight, but which are homes to vibrant communities, and often have remarkable claims to fame. We encounter momentous historical figures, such as suffragette Emmeline Pankhurst, as well as the town that gifted (or cursed) us with Marmite. The concept is that Portillo, in following the original Bradshaw journey, gives attention to our towns and their histories, whilst also reflecting on their present place in our collective heritage.

It’s refreshing to have a series that takes the spotlight off London for a change, and gives every part of the country a chance to shine. In voyaging around the North West of England, there are inevitably a few cliches, such as whippet racing, which reinforce the notion that it’s all flat caps and sighthounds, though the locals Portillo meets are generally very affable. He even visits a socialist hang-out and, despite being teased as a Tory for not paying for his mug of tea, is given a very warm welcome. Stopping to chat to trainspotters and asking the opinions of people in the street, Portillo has an easy charm and cordial manner that is the beating heart of the show. This series seems to have been filmed in perpetual sunshine too. Added to Portillo’s snappy linen jackets and chinos, it’s relentless bright, cheery, and reflective of the very best of tolerant, diverse, ironic and often slightly eccentric British culture, which varies even between neighbouring villages. It’s a wonderful advert for the UK.

When he lost his seat in the 1997 electoral wipeout for the Tories, the phrase ‘Portillo moment’ entered the lexicon of British culture (despite his gracious acceptance of defeat). Great British Railway Journeys has been Portillo’s opportunity to present a new face to the British public, and find the widespread affection and national treasure status he didn’t always enjoy as an MP. It’s also taught a generation of youngsters to say ‘railway station’ instead of ‘train station’. The show is an unceasing delight, with enough substance to satisfy the curious, and enough fluff to amuse the casual viewer. Michael Portillo is the perfect travelling companion.