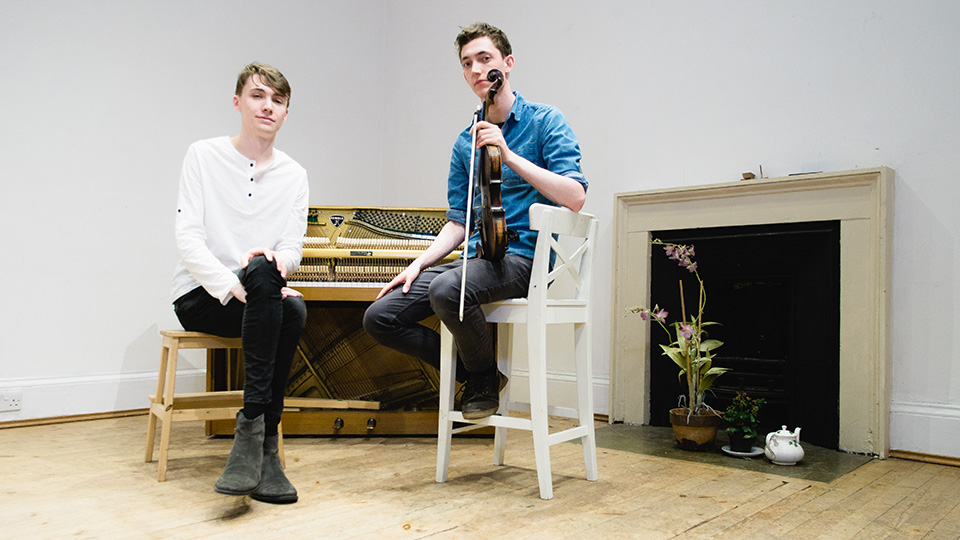 The album is a suite of new music born from a journey to now uninhabited islands deep in the North Atlantic – some of Scotland’s most remote and remarkable places. The album will be available on all major streaming platforms, CD and vinyl.

The duo’s trip, which took place aboard the Dutch tall ship Wylde Swan with filmmaker Hamish MacLeod, was documented for the accompanying Air Iomall film. They found inspiration from the histories, people, and landscapes of these mysterious, wild locations.

The film culminates with a concert of their new music on St Kilda – the most remote part of the UK, on the 88th anniversary of the evacuation of its native population. The live performance is captured in its entirety on the album.

Pre-orders for the album open on 11th June at www.cgjpmusic.bandcamp.com.

Grey and Peach will mark the launch of the album with unique live events featuring a film screening in the first half and performance of the new music in the second half. You can catch them at:

Prior to release, Grey and Peach will travel to Australia for screenings and performances at the National Celtic Festival, Victoria, 7th – 10th June 2019 (www.nationalcelticfestival.com/).

The track listing for Air Iomall is:

The project was supported by Help Musicians UK and Creative Scotland.

Advertisement. Scroll to continue reading.
In this article:Charlie Grey and Joseph Peach