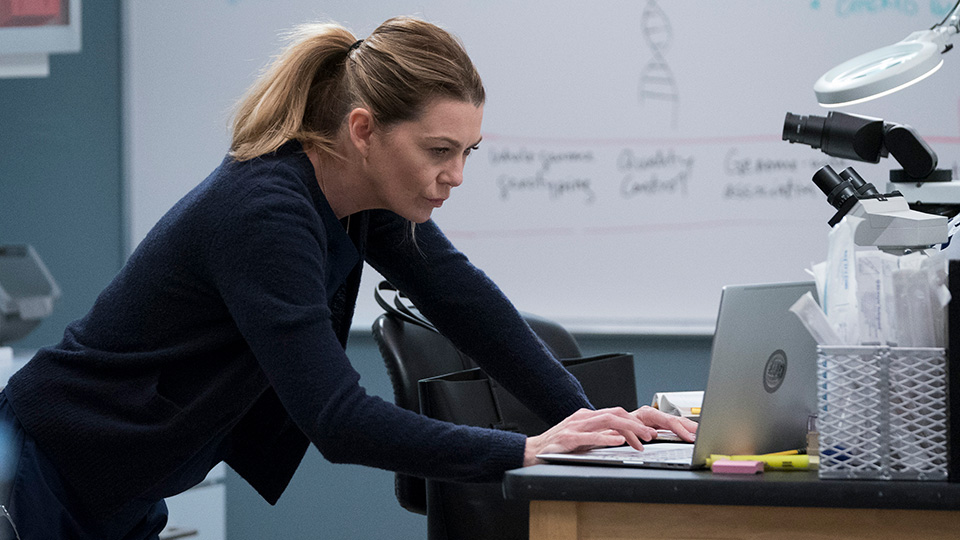 Grey’s Anatomy has just finished its fifteenth season in some parts of the world and fans are going to be left guessing for a few months after that finale.

If you haven’t seen the season 15 finale of Grey’s Anatomy and want to avoid spoilers, stop reading this article now.

In the penultimate episode of the season DeLuca (Giacomo Gianniotti) took the fall for Meredith (Ellen Pompeo) and confessed to committing insurance fraud. He shared the news with Meredith who was stuck in a hyperbaric chamber with Alex (Justin Chambers) and his patient Gus (Christian Ganiere), knowing she couldn’t stop him.

Once Meredith was out of the chamber, she confessed to Bailey (Chandra Wilson) and Catherine (Debbie Allen) but Richard (James Pickens Jr) and Alex also came clean about their part in Meredith’s actions (by the way, loved that nod to season 2). Bailey reacted by firing them all and Meredith went to visit DeLuca in prison, where she told him she loved him, before going to turn herself in.

Alex meanwhile finally found out what was going on with Jo (Camilla Luddington) and she decided to commit herself to the hospital’s psychiatric ward for treatment.

Elsewhere in the episode Teddy (Kim Raver) gave birth with Owen (Kevin McKidd) by her side, Levi (Jake Borelli) reconciled with Nico (Alex Landi) and came out to his mother, Amelia (Caterina Scorsone) asked Link (Chris Carmack) to give her time while she figured out her feelings for him, and Jackson (Jesse Williams) and Maggie (Kelly McCreary) continued to fight during their camping trip before Jackson mysteriously disappeared.

With Jackson’s life potentially hanging in the balance (although it wouldn’t be the first time he’s done a disappearing act on Maggie), and Meredith facing time behind bars, it’s going to be a very long summer wait for us Grey’s fans.

1. Meredith to get away with insurance fraud. She did a bad thing for the right reasons and as she said herself in the finale, this is her first offence and she has a lot of standing in the medical community. I can’t see a storyline where Meredith is separated from her kids and behind bars but I expect the start of season 16 may involve a court case.

2. Meredith and DeLuca to really explore their relationship. Now they’ve both said I love you, the path is (almost) clear for the lovebirds to settle into their romance and enjoy time together. The kids know about them, their friends know and I hope the future is looking bright. I know not everyone is on the MerLuca train but I most certainly am.

3. Owen to get one season of peace. For the love of god, can the man not catch a romantic break? He should always have been with Teddy and now they have a child, it’s about time they damn well got together. There’ll always be Cristina and Owen shippers (she’s never coming back people!) and I kinda liked him with Amelia this season, but I feel he belongs with Teddy. Where that leaves Koracick (Greg Germann) is anyone’s guess, especially as he’s a series regular for season 16.

4. Jackson to be alive. Please don’t kill him off! I was fully expecting him to be mowed down by a car while walking around in that fog. I can’t take another main character death on the show and I’m not sure most fans can either. I have everything crossed for a clever twist or that Jackson simply got fed up of Maggie’s attitude and sprinted off.

5. Amelia to really fall for Link. Like Owen, Amelia has had a rough ride in recent seasons and I don’t think she’s ever been happier than she is with Link. He brings out a fun side of her and I want to see her embrace that rather than run away from it. I like the two of them together and I like a more joyful Amelia.

6. Schmico to go from strength-to-strength. Nico’s career may be a bit up in the air, and his attitude stinks, but I have hope that Levi will help him through. I’m worried that Alex Landi hasn’t been made a series regular so perhaps that doesn’t bode well but I’m an eternal optimist. Aren’t they the cutest?

7. Jo to come back stronger. To say she went to hell and back this season would be an understatement. Thanks to Link and Meredith, she’s found the strength to get help and with Alex by her side, I want to see her come back fighting. She’s shown incredible promise in the field of medicine and I’m loving her friendship with Meredith. Here’s hoping Jo is back to kicking ass in no time.

8. More multi-episode cases. I’ve loved this season that there have been a few cases that have run through several episodes. It reminds me of the early seasons of the show and I felt really invested in the guest characters. I think I cried more in season 15 than I have for years and my heartstrings were pulled so much, I thought I’d never stop the tears from coming.

9. Development for the interns. Aside from Levi the other interns have been pretty under-used this season. I want to know more about Helm (Jaicy Elliot), Qadri (Sophia Ali) and Parker (Alex Blue Davis). It’s about time they had their turn in the spotlight.

10. The return of more familiar faces. I’m still dying for April (Sarah Drew), Arizona (Jessica Capshaw) or Callie (Sara Ramirez) to come back. At this point, I’ll take a multi-episode stint – although I’d rather have them all back full-time.

Grey’s Anatomy will return to ABC and Sky Witness HD for season 16 this autumn.