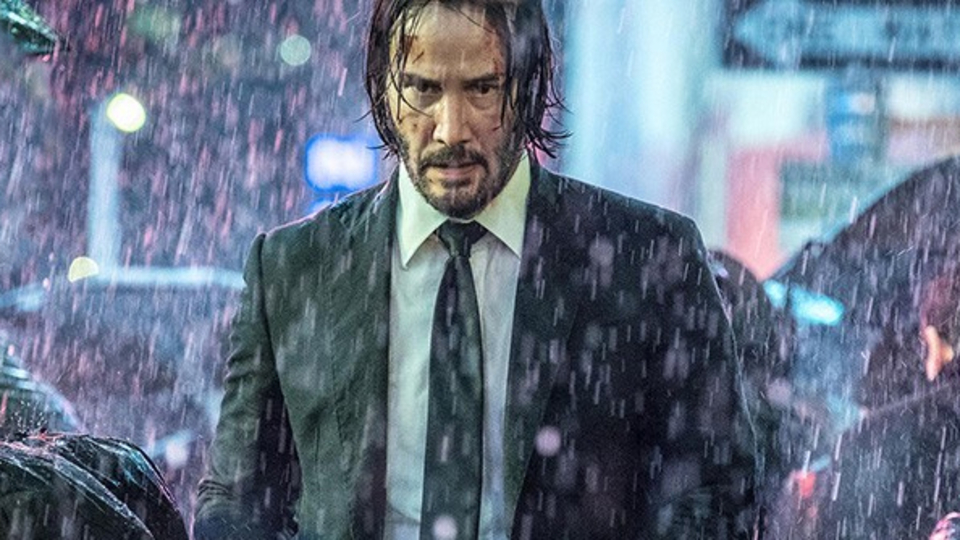 John Wick: Chapter 3 manages to outgun its previous chapters with a heady mix of style-soaked ultra-violence that is simply stunning to watch. This is a film jam-packed with action. In fact it’s almost relentless in its pursuit to bombard your eyeballs with expertly choreographed sequences of pure balletic mayhem that has Keanu Reeves cementing himself as one of the greatest action movie stars of all time.

The plot follows on straight after the events of John Wick and John Wick: Chapter 2. John is now Ex-Communicado and the entire assassin world has been alerted of the $14million dollar bounty placed on his head. With little options and already battered and bruised from his previous mission, John must survive long enough to find a way out of this impossible scenario.

It’s safe to say that if you were on the fence with John Wick or its sequel then there’s nothing for you here. For everyone else, the best Hollywood action film of the year has arrived and it’s a glorious ode to action grandeur. Every single frame of this movie is dripping with style and substance, with a monumental headcount to boot. This is what action cinema is all about – assaulting your senses with great set-pieces and stunt-work I’ve never seen attempted before. Want to see John Wick have a gunfight with motorcyclists using swords? How about a 8-on-1 knife fight in a antique weapons shop? Or perhaps watch Mr. Wick kill someone with a book (my personal favourite). It’s all here in eye-watering fashion.

How this film managed a 15-certificate is beyond me because it has some truly gruesome violence. Of course, it’s all done with a stylised and knowing wink to the audience so there’s something almost Tom and Jerry about it. But even with that said, watching John Wick stick a knife into someone’s eye is pretty brutal (even though the bad guy deserved it). It’s almost like a computer game, especially when John Wick meets up with an old acquaintance (Halle Berry) who has some pretty special attack dogs that steal every scene they are in (which also reminded me of Shinobi and his attack wolf on the SEGA Megadrive).

There’s a commitment to delivering an action masterpiece here and the fight sequences all leave their mark. For me, the film peaks at the first major action sequence we get, which finds John on the run and having the knife fight to end all knife fights. Its so gloriously put-together that this scene will be remembered as a classic for years to come. The horse sequences uses the environment well to conjure up some great visuals. There’s a fantastic glass room where a lot of the fighting takes place, and coupled-up with some amazing lighting effects really makes the aesthetic of the fight match the beauty of the set-up.

Keanu Reeves once again delivers jaw-dropping spectacle that leaves you awe-struck. He was made to play this role, and he excels once again as the reluctant assassin looking for a way out. He has wonderful support from perennial scene-stealer Ian McShane, Lance Reddick, Saïd Taghmaoui, Anjelica Huston, Jason Mantzoukas, a scenery-chewing Laurence Fishburne and an over-the-top Jerome Flynn. It’s great to see Mark Dacascos back in a big budget movie too, and he brings a healthy dose of humour to the table as the lead assassin after John Wick. Check out his 1997 cult classic movie Drive with Brittany Murphy and Kadeem Hardison if you haven’t seen it yet.

Of course, there are a few minor faults. The action is so relentless that at times it all blends into one. Something a good action movie needs is proper pacing, and John Wick 3 tries to throw too much at you in a short amount of time. Compared to a film like The Raid 2 (which I strongly believe is the greatest action movie ever made) and you see how the narrative has been allowed to breathe in order for the action to take maximum effect. Speaking of The Raid 2, it’s great to witness martial arts masters Yayan Ruhian and Cecep Arif Rahman in a fantastic fight sequence with Reeves in this movie. Halle Berry does really well on the action front but I found her character to be needlessly curt. They clearly have a past, but she just came across as endlessly annoying in the script which was a real shame (through no fault of the actress).

John Wick: Chapter 3 is what escapist cinema is all about. After three movies, director Chad Stahelski and writer Derek Kolstad have cultivated a wonderfully-immersive secret world that has so much potential to deliver thrills and excitement. With Keanu Reeves at the helm, this franchise will go from strength to strength, upping the ante of mainstream action-cinema along the way. And fully expect there to be a John Wick: Chapter 4 because from the look of things, this is only the beginning of the carnage and mayhem to come.