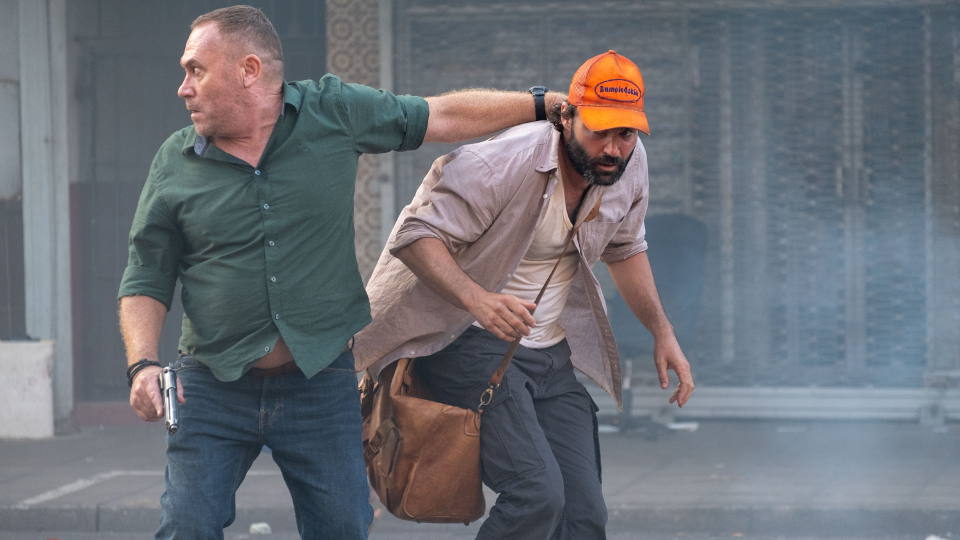 On the seventh episode of The Widow, The search for Will (Matthew Le Nevez) took Georgia (Kate Beckinsale) to Rwanda.

The episode opened up in Kinshasa with General Azikiwe (Babs Olusanmokun) on his way to deliver a present to Sidney’s (Yoli Fuller) house for his son’s birthday. When he arrived it was revealed that this was taking place at the same time as the end of last episode. Inside the house Martin (Charles Dance) and Georgia were questioning Sidney about Will. Azikiwe drew his pistol and snuck around the other side of the house, being careful not to be seen.

He snuck in through the door to the kitchen and placed the toy down, before grabbing Sidney’s wife. This action was the crash that we saw Sidney, Georgia and Martin hear. Azikiwe held a gun to the wife and she shouted that she was fine. He then quietly told her to get away from the house if she knew what was good for her. He let her go and then came back to listen as Sidney made the phone call to Rwanda and had Will put on the line.

At the point where the last episode ended, Azikiwe walked in brandishing his gun. He was furious that they had all told him lies and that Sidney had been working behind his back with Pieter (Bart Fouche). Sidney tried to explain about the mine but Azikiwe lost it and shot him through the head. Martin and Georgia took the opportunity to flee. They made it to their car and sped off before Azikiwe noticed. Georgia told Martin that it was Will on the phone and he asked what next?

The episode then flashed back 5 years to when Georgia was pregnant with Violet. Will was off to an job interview with DRC Aid where he was interviewed by Judith (Alex Kingston). She commented on some issues with his CV and previous roles but Will made a heartfelt plea of why he needed the job to support Georgia and their unborn daughter. He promised he’d work harder than anyone for Judith and that he’d do whatever she needed him to do.

Back in the present, Martin and Georgia arrived back at Judith’s house. Their hired security came straight out to tell them that Adidja (Shalom Nyandiko) had run away. Georgia was worried but Martin said she’d be ok and pointed out that she wasn’t actually Georgia’s responsibility. He offered to stay and try to find Adidja while Georgia went to Rwanda to find Will. She did as he asked and jumped on a plane to Kabeza, Rwanda where she found a security guy waiting for her. He drove her to the red house with while pillars where Will was believed to be.

As she approached the front gate, a man came out asking if he could help her. She noticed he had a gun tucked into the front of his pants. She made her excuses and walked away, telling her security that they would try again later. Meanwhile, in Kinshasa, Martin went to see the police about Adidja but again they weren’t interested in helping him. Frustrated he made a call to Georgia to update and and find out how she was getting on. She explained the house was guarded but she was working on a plan to get in. He said not to do anything stupid and she replied it was a bit late for that.

Georgia and her security man staked out the house and noticed the guard leaving after running out of cigarettes. They decided to make their move and Georgia headed to the house while her security guy followed the guard to try and keep him busy. Georgia broke a window and gained entry before investigating. The house appeared empty but she found one room with a wall covered in her husband’s drawings.

Another flashback took us back to a year after Violet died. Georgia was feeling down because Will had to head back to the DRC again. He suggested taking a mobile down that they had put up for Violet but Georgia wasn’t happy to. Will left and said he’d call when he landed.

Back in the present, Georgia heard a noise, like someone had returned to the house. She went to see and found Will had just walked in. She couldn’t believe her eyes and grabbed and kissed him to make sure he was real. He seemed shocked and awkward then said he wished that she hadn’t come. He said she needed to leave but Georgia sat him down and tried to get some answers. She said she would take him back home and asked if he was scared of the guard with the gun. Will revealed that the guard worked for him and that there was a lot she needed to know.

Four years earlier, in Kinshasa, Will was shown drinking at the bar with the same barman (Chris Tummings) that Georgia met back in episode 1. Pieter was there and the barman referred to him as Mr. Tequila as that’s what he always drank. Will stuck up a conversation with him and joined him at his table. Will revealed he knew who Pieter was and said they had a common friend in Judith. Pieter said he didn’t know anyone called Judith.

Will had been looking into the accounts at DRC Aid and discovered that Judith was paying money to Pieter’s security firm. Will wanted to know how Judith was making so much money. He promised that if Pieter told him, that he’d make sure Pieter’s cut went up. He told Pieter that he wasn’t threatening him but making him an offer.

At Judith’s house, Will confronted her about smuggling precious metals over the border into Rwanda. She tried to deny it so he revealed everything he knew about her and Azikiwe working together. He said she needed to cut him in on it or she’d get caught. He had a plan to help launder the money through her UK charity. Judith was suspicious of his motivations and he explained that he wanted to make more money. She asked him to name his price and began to pay him to keep quiet.

Will kept the money under a fake name in Kinshasa, a year later he had a flight booked on the doomed plane. At the airport he was sat in the depatures lounge next to Gaëlle (Luiana Bonfim). He received a call from Pieter who told him not to get on the flight. As his gate was called, Will left the airport by taxi where he left a voicemail for Pieter asking what had happened. Meanwhile, the laptop bomb exploded and the plane crashed.

Georgia couldn’t understand why Will hadn’t contacted her during the past 3 years. He explained the plane had nothing to do with him but that the politician onboard had plans that directly threatened Azikiwe’s operation. So Azikiwe planted the bomb to bring down the plane to kill the politician. He explained that Judith bought him the ticket in the hope that he’d also die in the crash. The manifest had listed him as still on the plane so it meant that Azikiwe and Judith would think that he had died. He didn’t want to resurface in fear of being in danger again. He blamed himself for not saying something that could have prevented the disaster.

Will revealed that he asked Pieter to check on Georgia at the airport. He also explained that Azikiwe had asked Pieter to keep an eye on Emmanuel as it was his wife who was carrying the bomb. Georgia wanted to know why he hadn’t called her but he said he had but could never find the words to speak.

Will also explained that Pieter was the one who hid him from Azikiwe in the cabin at the mine. Pieter told him that he needed to forget his old life. After hiding him for a month, Pieter made moves to get Will to safety across the border away from Azikiwe. Will said he was a coward and thought that Georgia would be better off without him. He’d built a life in Rwanda and worked on a local farm.

Georgia asked why he’d been back in Kinshasa and Will explained that Pieter had visited him and asked for his help. He’d been diagnosed with HIV but the drugs were very expensive. He was upset that things weren’t running as they used to, everyone was taking bigger cuts while his cut was getting smaller. He needed more money because he wanted to stay alive for his daughter. He revealed his plan to takeover the government mine using hired militia.

He introduced Sidney who was now working with him but needed a favour from Will. Pieter wanted the money that Judith had given Will to hire the militia. Will was happy for him to take it but as it was in a bank in Kinshasa under a different identity, Will would have to go there with him to withdraw it. Will was concerned about the plan but Pieter said he could smuggle him over the border and that Will could return home with some of the money too for a better life.

While they were in the bank, a protest erupted into a full scale riot. That’s when Will was caught on TV with Pieter and he helped him get away safely. He took Will to Punia where he was to be smuggled in a crate in the back of the coffee transport van by a woman named Gloria (Balindile ka Ngcobo). Will gave his lucky cap to Pieter.

Georgia asked Will if it had all been worth it and he said honestly, no. He explained that none of it was planned, he’d just been trying to survive. He said he’d thought about Georgia and Violet every day and hadn’t just stopped loving her. Suddenly the front door opened and Gloria walked in holding a baby and Georgia was destroyed. Will stood up and introduced Georgia to Gloria.

In tears, Georgia said she now understood and she stormed out. He ran after her and she repeated that she understood. She suspected that he’d been spending so much time in the DRC having an affair. She asked the age of the baby and he said a few months. A furious Georgia stormed off again in tears and told him to go home. She headed straight for a bar where she got hammered on tequila and smoked a load of cigarettes. She then started a bit of a fight and ended up breaking down in tears.

Elsewhere in Kinshasa, Adidja walked alone and looked for somewhere to spend the night on the streets. A woman tried to help her but she said she’d made a mistake. She eventually headed back to Judith’s house and knocked on the door. However, when the door opened she found a confused Judith stood there!

Can’t wait for the final episode? Check out our preview of The Widow 1×08 Nigel.

The final episode of The Widow airs Tuesday 30th April on ITV at 9pm.