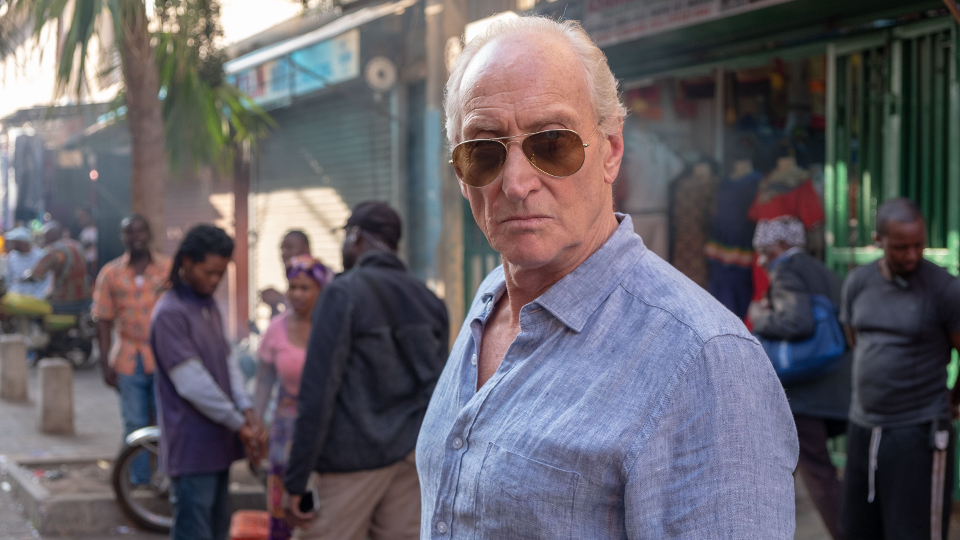 On the seventh episode of The Widow, Georgia (Kate Beckinsale) headed to Rwanda to try and find out the truth of what happened to her husband Will (Matthew Le Nevez).

It was revealed that the events from the end of episode 6, were witnessed by General Azikiwe (Babs Olusanmokun). After the phone call to Will, he revealed himself and ended up killing Sidney (Yoli Fuller) for working with Pieter (Bart Fouche) behind his back. During the commotion, Georgia and Martin (Charles Dance) made their escape.

Back at Judith’s (Alex Kingston) it was revealed that Adidja (Shalom Nyandiko) had gone missing. Martin offered to stay and try to find her while Georgia went to Rwanda in search of Will.

Georgia found the house where Will was presumed to be but found that it was guarded. She broke in when the guard left but the house was empty. She found some drawings of Will’s and then suddenly he entered the house. Both of them were rather overwhelmed but Will wasn’t quite as happy to see his wife as she was expecting.

Will wished she hadn’t come and tracked him down and told her to leave. She pushed for answers so he decided to tell her everything. In the past he found out what Judith was up to with smuggling precious metals across the border to Rwanda. He made a move to get in on it too and ended up working with Pieter.

He became friends with Pieter and blackmailed Judith to Pieter and himself more money. The day of the plane bombing he received a call from Pieter to not take the flight. He did as instructed so wasn’t aboard when the bomb went off. Pieter hid him from Azikiwe in the cabin at the mine and eventually helped him get to Rwanda.

The flight manifest had still listed Will as a passenger so that’s why everyone thought he was dead. They thought it best he forget his old life and start afresh with no fear that anyone was coming after him. The money he got from Judith he stored in a bank in Kinshasa under a fake name.

One day Pieter came to Will for a favour, he wanted the money he had in the bank to pay for a militia force to take over the government mine. Will agreed but had to go back to Kinshasa with Pieter to withdraw it. While he was there a riot broke out and that’s when he was spotted on TV. Pieter didn’t have him hostage, he was trying to safely evacuate him.

Will was smuggled back to Rwanda in a crate by Gloria (Balindile ka Ngcobo). He gave his lucky cap to Pieter. Things became clearer for Georgia when a Gloria arrived at Will’s new home with their baby. He really had moved on so a furious and upset Georgia went out and got very drunk.

Elsewhere in Kinshasa, Adidja eventually returned to Judith’s after struggling on her own. When the door opened it was revealed that Judith is still alive!

The final episode is Nigel. Blindsided by the revelations about Will, Georgia returns to Kinshasa. But before she can right the wrongs of the past, she must contend with those determined to stop her from exposing the truth.

The eighth and final episode of The Widow airs Tuesday 30th April on ITV at 9pm. Preview it with our gallery: