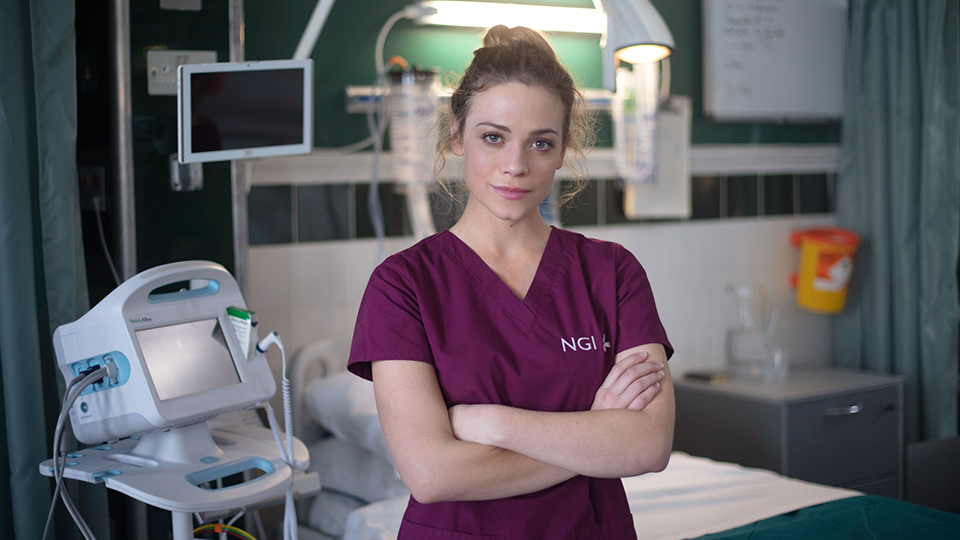 Trust Me returned to BBC One earlier this month with an all-new storyline and cast, and it’s been keeping viewers gripped.

This series follows the story of Corporal Jamie McCain (Alfred Enoch), a soldier injured during active duty who is taken to a spinal ward for rehabilitation. Once on the ward, Jamie learns that someone is killing the patients and in the latest episode, he found an ally in troubled doctor Zoe Wade (Katie Clarkson-Hill).

Ahead of the third episode of the series, I caught up with Katie to find out what’s coming in the final two episodes, discuss her experiences of working with Alfred Enoch, and to find out how worried we need to be for her character.

In the latest episode of Trust Me, viewers saw Zoe agree to help Jamie look into the deaths in the hospital. She found a pattern and now believes, like Jamie does and Danny did, that there is a murderer on the ward. What can you tease about what’s coming next?

We’re about to see Zoe and Jamie really start to connect and become allies in what they both now believe is something pretty serious going on at the hospital. Zoe wants to take the info to the other staff, including her fiancé for advice, but she’s not necessarily going to get the support that she’s after, meaning she may need to take matters in to her own hands.

During the first two episodes it’s been heavily hinted that Zoe has had difficulties in her past and we’ve seen her stealing and taking pills. Dr. Watson (John Hannah) caught her in the act but Zoe doesn’t know that yet. How worried do we need to be?

Yeah, it’s about to get a little tricky for Zoe in the next episode…the walls start to close in on her. She’s caught red handed on the CCTV stealing the drugs so there’s very little she can do. But you better believe she’s going to try and wiggle her way out of it! She starts to believe Jamie and wants to help him find out what’s going on, much to everyone else’s disapproval. She doesn’t get much, if any support from other staff so she goes it alone (with Jamie), and people start to doubt her credibility. Things start to get dangerous for her.

Zoe and Alex (Richard Rankin) are engaged and their relationship has only been touched on briefly so far. What is coming up for them as a couple in the final two episodes?

We’re about to learn a lot more about Zoe and Alex’s relationship as we approach episode 3. We see them at home in their flat together, and learn how the dynamic between them is maybe not quite as rosy as it seems at the hospital. The relationship is under serious strain as the two of them disagree on how to handle the situation, and Alex isn’t Jamie’s biggest fan so that doesn’t help matters while Zoe is trying to support him. We see Zoe start to be overpowered by Alex, in small things like the planning of their wedding, but this is the tip of the iceberg. He can be manipulative and possessive and Zoe starts to weaken under pressure from him and Watson.

What drew you to the part of Zoe and what was your audition like?

I remember reading the first episode and just liking Zoe instantly. She’s kind of scrappy and messy with all of the best intentions, and I just love that. She’s very human, if that makes sense, and I think that’s why she’s able to connect on a level with her patients that none of the other doctors do. Aside from her career as a doctor, I thought her relationship with Alex was something that would be really interesting for us to play out. It’s complicated. There’s love there, but there’s also some gas lighting going on and it’s definitely not the healthiest. There are some dark moments for them coming up next in episode 3. Dan Sefton (the show’s writer) did such a great job with the script and has written some very cool characters. Zoe has quite the backstory – we hear hints of her battle with mental illness, the 6 months she took off work – she’s been through a lot.

My audition was firstly a self-tape that I did at home – I remember filming it vividly because it was in the middle of that heat wave in the summer and I was absolutely boiling! Then I was called in to audition for John Alexander (our director) because they wanted to see if I could read in a Scottish accent. I remember turning up and realising Rae (casting director) was actually Scottish and thinking “uh oh…’

You share a lot of scenes with Alfred Enoch, who plays Jamie. What was he like to work with?

He’s the best. Working with Alf was a joy from start to finish. He had some hugely challenging and exhausting physical scenes and was always somehow still completely full of energy and focus. We talked a lot about the relationship between Zoe and Jamie and how we wanted it to play out. It was a very collaborative process. He’s pretty chilled, I mean, there’s one pretty tense scene in particular where I had to stab him with a needle and I think he kept his cool more than I did in the filming of that!

This series has such a fantastic ensemble cast. What was it like making the series and who would you say you learned the most from?

Making the show was a loads of fun. The cast were brilliant and a really lovely bunch to be around. John (Alexander) gave us a lot of creative freedom and created a really comfortable environment for all of us. Working with that medical setting can be quite daunting, but he had a lot of patience for us to get to grips with everything.

Trust Me continues at 9pm Tuesday on BBC One.

In this article:BBC One, Katie Clarkson-Hill, Trust Me