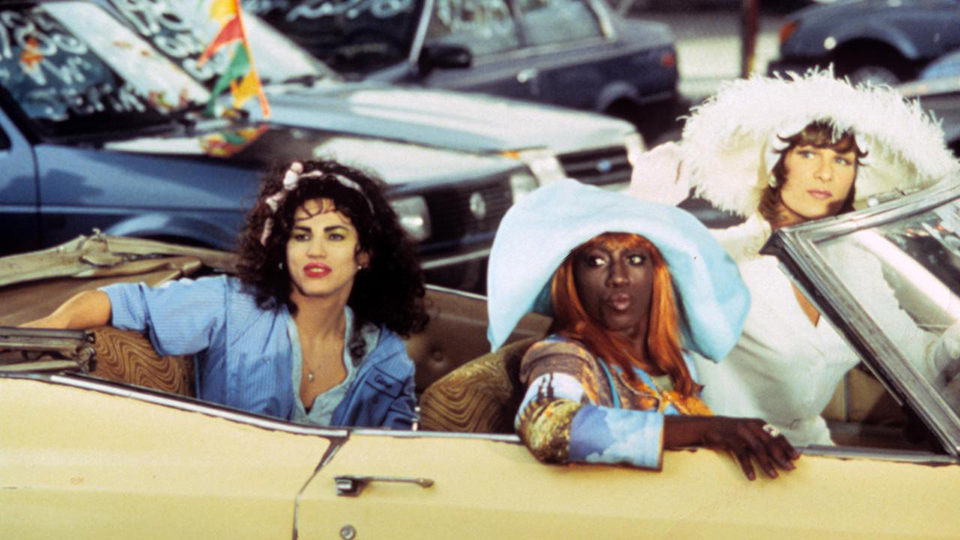 Vida Boheme (Patrick Swayze) and Noxeema Jackson (Wesley Snipes) ties for New York City’s Drag Queen of the Year contest. They win a trip to Hollywood to advance through to the Miss Drag Queen of America Pageant but before they leave, they take pity on young drag queen Chi-Chi Rodriguez (John Leguizamo) and ask her to join them. Trading in their plane tickets so they can buy a car, the trio embark on their trip to Los Angeles but when they break down in a small town, they are forced to live among the locals while they wait for their car to be fixed.

To Wong Foo, Thanks For Everything Julie Newmar was a bit of an undetected gem on its release in 1995. While it did pretty well at the box office, it came shortly after the excellent The Adventures of Priscilla, Queen of the Desert and the two films are very, very similar in narrative. Both films were well ahead of their times and I remember enjoying watching them when I was a kid. I was a little bit nervous about watching it again to be honest as I was worried the film wasn’t as good as I’d remember or that it had aged poorly.

Thankfully neither of those things is true and To Wong Foo, Thanks For Everything Julie Newmar remains a very entertaining and funny film. The film was a bold choice for both Patrick Swayze and Wesley Snipes, both of whom were known for their previous roles as very masculine men, and they are both fantastic to watch on screen. They foster a great rapport from the first scene they share together and both men are convincing. It should be noted that John Leguizamo is the film’s scene stealer though, really throwing himself into the role of the feisty Chi-Chi.

Storywise To Wong Foo, Thanks For Everything Julie Newmar explores the old fish out of water trope. The three drag queens couldn’t have ended up in a town any less fitting for them but as is always the case with these stories, they manage to have a big impact on the people they meet and vice-versa. Vida bonds with abused housewife Carol Ann (Stockard Channing), who takes the three queens in while they wait for their car to be fixed. Chi-Chi stops short of a romance with handsome young man Bobby Ray (Jason London), realising he should be with one of the town’s young women instead.

The film also boldy tackles assault in a scene that takes place before they break down. Vida is assaulted by Sheriff Dollard (Chris Penn), who pulls them over because of a broken tail-light. Not realising, or perhaps not caring, that Vida is a man, Dollard puts his hand up her skirt and reacts badly at what he finds. This kicks off a sub-plot with the three queens being hunted down by him so he can get his revenge for being humiliated.

To Wong Foo, Thanks For Everything Julie Newmar is a hoot of a movie and a very enjoyable watch. The central actors give fantastic performances (and so does Stockard Channing) and it’s a heartwarming tale of being accepting to those who are different to you. The film also boasts a killer soundtrack and, dare I say, it’s one of the late Patrick Swayze’s best. If you’ve never seen it, you should check out this gorgeous new Blu-ray release, but if like me, you saw it years ago, now is the time to revisit it.