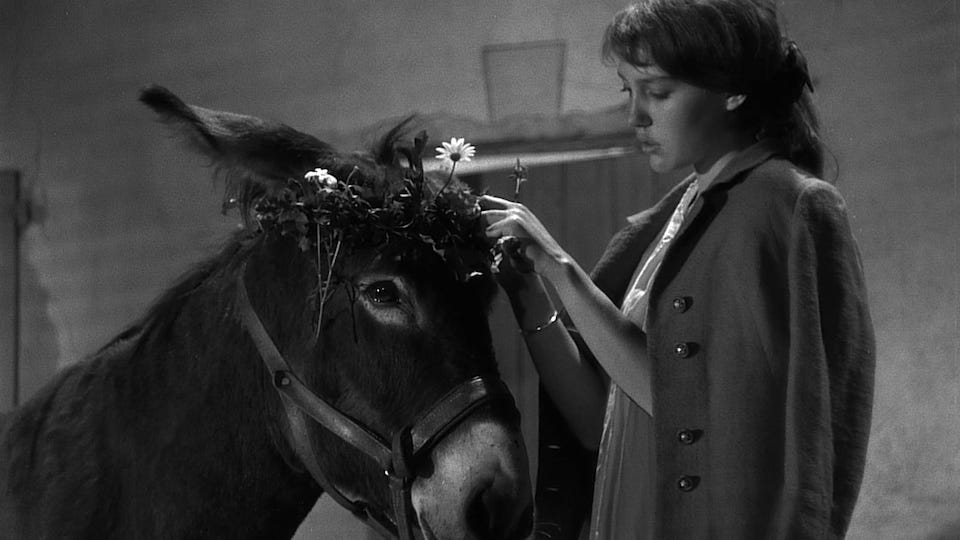 Reviewing canonical films always fills me with dread. When nigh on every critic, filmmaker, academic, scholar, and film theorist who ever saw the film has already declared it to be a transcendental masterpiece, there’s really not a whole lot that can be added to the conversation. Unless of course, I disagree entirely.

For the record, I don’t, but Robert Bresson’s Au Hasard Balthazar is a film – I believe – with extremely limited appeal. Most people tend to discover Bresson when they’re studying film at university or sixth form. That’s certainly my experience anyway. You’re not going to find his films on Netflix or Sky Cinema. He is the kind of rigorously philosophical filmmaker whose famously ascetic style invites serious study and analysis, rather than escapism and entertainment. Without wanting to sound like too much of beard-stroking film twat, the casual film fan might want to give this one a miss.

If on my recommendation, you were to watch Au Hasard Balthazar, and then told me that it was the most ponderous and tedious 95-minutes of your life, I couldn’t argue with you. It’s by no means the most riveting sounding film, in fact, the premise is vaguely ridiculous: a religious allegory about a donkey in rural France. But in this simple parable, Bresson invites us to witness a heart-breaking and deeply profound evocation of the beauty, the cruelty, and the indifference that life has in store for us all.

For that is the central conceit of Bresson’s film – no matter what we hope our life will be, the world will ultimately do with us as it pleases. The life of the donkey Balthazar who we follow from birth to death, presents us with a perfect microcosm of life, society, and human nature.

Balthazar has many owners during his life, some of whom treat him kindly, and others who treat him with barbaric cruelty. His existence and experiences are mirrored by Marie (Anne Wiazemsky) the farm girl who named him. Balthazar doesn’t understand why he’s treated the way he is, he’s just a dumb animal, and he accepts this with the nobility of all dumb animals. It is only humans, with our intelligence and philosophies that attempt to find meaning in life.

Au Hasard Balthazar – like most of Bresson’s films – is a challenging experience, but ultimately rewarding. The main character is a beast of burden, whom Bresson makes no attempt to anthropomorphise. Bresson also, as he always did, employs non-professional actors (or models as he called them) who would be systematically stripped of artifice and theatricality in the hope that their performances would be nothing other than truth. But in spite of this, the film is punctuated with beauty, honesty, and optimism. By the time the final scenes play out you will be emotionally drained, heartbroken, and profoundly moved by this classic piece of French cinema.

This Criterion Collection release – a UK Blu-ray debut – has been restored from the original negative, and this new 2K digital restoration delivers a vastly improved sound and picture than we have seen on previous releases. There isn’t all that much on the disc however, just a couple of bonus features ported over from the Region A release.

First up is an interview from 2004 with film scholar Donald Richie talking about Bresson. Then there is “Un metteur en orde: Robert Bresson” an episode of Pour le Plaisir from 1966, presented by Rober Stéphane and dedicated to Au Hasard Balthazar. There are interviews with Bresson, the cast and crew, and other filmmakers including Jean-Luc Godard, who famously said of Au Hasard Balthazar: “this film is really the world in an hour and a half.”