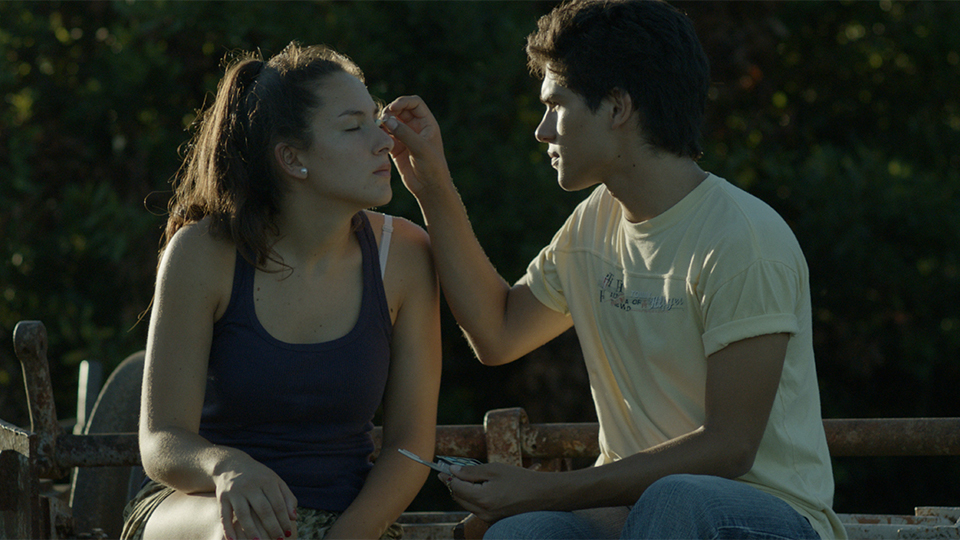 Marcos (Walter Rodriguez), known to his peers as Marilyn, lives a stifled existence helping his father Carlos (German de Silva), mother Olga (Catalina Saavedra) and brother Carlitos (Ignacio Gimenez) on the family farm. Close to his father, who wants him to break free from the restraints of the farm, Marcos is left devastated when Carlos suddenly dies from a heart attack. When the carnival comes to town, Marcos embraces the festivities with his friend Laura (Josefina Paredes) attending in drag and having the time of his life. On their way home Marcos and Laura are stopped by a group of young men, and Marcos is brutally raped.

Marilyn is based on true events and it’s the second film from writer/director Martin Rodriguez Redondo. The film takes a contemplative approach to its subject matter, often lulling the viewer into a false sense of security before throwing a curveball at them. For the most part Marcos is depicted as insular and miserable. He’s trapped by the expectations of his family, particularly his mother who tries her best to frighten the gay out of him.

Following the ordeal of his rape, Marcos goes further inward until he meets the openly gay Federico (Andrew Bargsted) and the two quickly enter into a relationship. The contrast between Marcos and Federico is interesting. Marcos has dealt with a lifetime of suppressing his needs and wants for the sake of his mother whereas Federico has a more carefree feel to him. That draws Marcos in and in some ways he sees in Federico what he wants for himself.

Quite remarkably the film is Walter Rodriguez’s first and he has quite the heavy burden on his shoulders. The character of Marcos is a tough one to get under the skin of but he manages. He brings the character to life during the carnival scenes as Marcos embraces his true self, yet when he’s back at home with his family he plays the character more cautiously and introspective.

Marilyn does have a few issues. There are definitely moments where you question the decisions of the characters. One such is the moment before Marcos gets raped and he encourages Laura to leave. There’s no hint that she tries to get help and she doesn’t object to Marcos’ request. It’s a bit of a stretch to believe that she read a clearly bad situation wrongly. There are some other moments along the way too including the shocking conclusion, which feels inevitable but isn’t arrived at in a wholly satisfactory way.

Marilyn is an interesting film that showcases its star Walter Rodriguez. The direction is tight and the film doesn’t outstay its welcome at only 79 minutes in length. The film could have added a little more weight by fleshing out the supporting characters as we only really get to know Marcos. There are a few bits where the pace drags a little but otherwise Marilyn is an engaging, and at times difficult, watch.