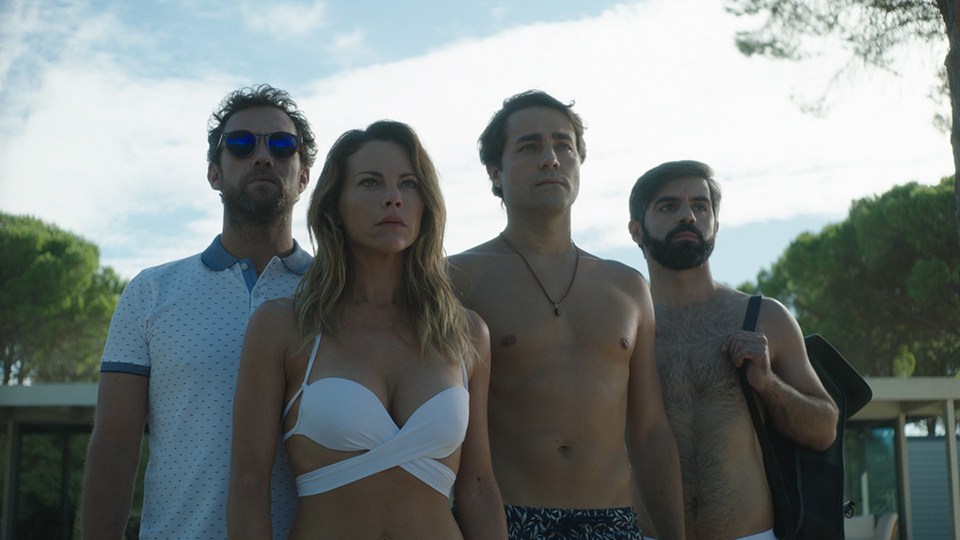 Four friends – Francisco (Nuno Pardal), Simão (Ricardo Barbosa), Vasco (Ricardo Pereira), and Joana (Oceana Basilio) – get together at Francisco’s sun-drenched villa in Portugal for the weekend. With the aim of catching up and relaxing, the four friends are caught off guard when they receive a call from David, an estranged friend who left the country many years ago. When he tells them he would like to see them, the mysterious circumstances around his departure from the group begin to reveal themselves and tensions quickly rise.

Sunburn is the latest film from Vicente Alves do Ó (Al Berto) and it’s a simmering slow-burn drama that focuses on the lives and relationships of its characters. We spend a little time with the four characters before the call from David happens so get some notion of what they were like before he re-enters their lives. The group seems carefree, almost hedonistic at times. Simão is working on a screenplay called Sunburn, Vasco has started a relationship online with a married man and Francisco has agreed to father Joana’s children.

The close bond the four share is quickly ripped from them following David’s call. As they eagerly await his arrival, old tensions and wounds quickly bubble to the surface and threaten to ruin the foursome’s friendship. The majority of the film sees each character revealing their relationship with David and why they feel so hurt by him, or why they feel they hurt him. These reveals take a variety of forms with the characters arguing, calmly discussing the situation and breaking out into full-on fisticuffs.

Visually the film is stunning. Set in only one location, the gorgeous backdrop of Portugal and the villa the friends are staying in, are enough to keep you interested. Where the film lacks a little is in the development of its characters. For a piece that’s essentially a character study, Sunburn doesn’t let its guard down enough for you to really get under the skin of the four leads. David’s narration, which pops in and out throughout the film, gives his side of the story but you never truly know which of the characters is telling the truth as opposed to their own version of the truth.

Performance-wise the cast does a fine job. The standout for me is Ricard Pereira as the confident and romantic Vasco. He oozes charm and confidence, and in many ways he takes the lead in the group. Oceana Basílio, Nuno Pardal and Ricardo Barbosa are all solid in their roles with Basílio exploring the emotions of her character impressively.

Sunburn is a solid drama but it doesn’t quite manage to wow you or leave a lasting impression. The surprising lack of character development is problematic for me but the performances and the cinematography can’t be faulted. There’s enough here to hold your attention but I doubt it’ll be a film you’ll return to many times, if at all, after you’ve seen it once.