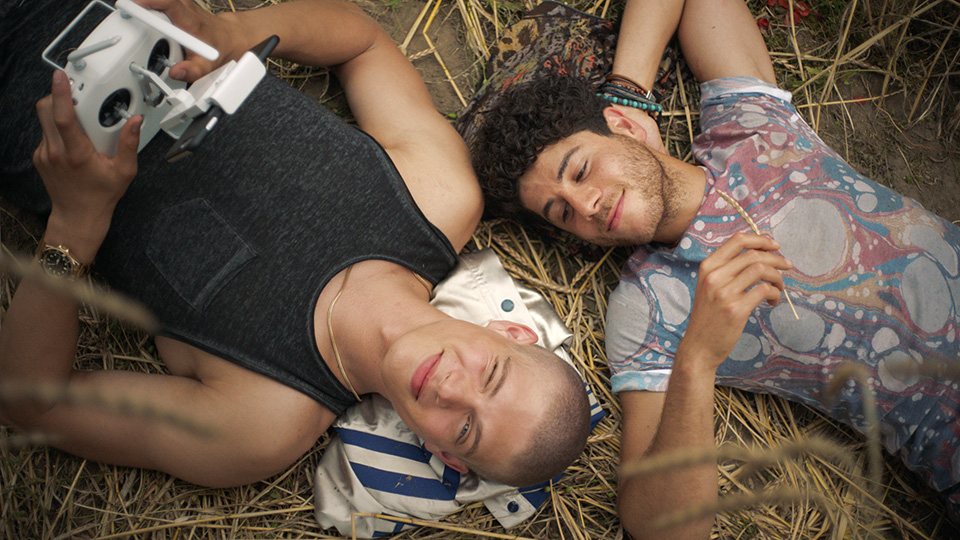 Joris (Josha Stradowski) has a chance meeting with Yad (Majd Mardo) but he’s too shy to make a move or introduce himself. The two encounter each other soon after when Joris learns that Yad is his grandmother’s new helper. Quickly the two fall for one another and embark on an intense and passionate relationship but when their families start to get in the way, they wonder if they should remain friends or if there is a romance to fight for.

Directed by Ellen Smit, Just Friends is a refreshingly entertaining romantic drama that doesn’t linger on the sexuality of its main characters as the love story pans out. This isn’t a typical pain-staking coming out drama nor does it sit on the more explicit side of what gay cinema has to offer. Instead Just Friends is a light, engaging film with a central love story that you’ll find yourself rooting for.

Yad comes from a Middle Eastern family who have moved to the Netherlands and he struggles to deal with his strict mother. When he meets Joris he finds a bit of an escape with him but he doesn’t realise that Joris also has issues with his plastic surgery addicted mother. The different backgrounds of the guys cause a bit of tension but it’s dealing with their family that proves to be the hardest thing for them. Joris has lots of unresolved feelings towards his late father while Yad has buried his troubles in drugs and partying, much to the disappointment of his mother.

What I liked about the movie is how it didn’t feel the need to hit you over the head about the central characters being gay. A little like Love, Simon, the sexualities of the characters had little bearing on the overall storyline and I feel it’s important for young gay people to see films like this that portray a same-sex relationship in a normalised and realistic way. Not everything has to be about the pain of coming to terms with your sexuality and Just Friends has a good chance of finding a broader audience by styling itself like a good old-fashioned romantic comedy.

The performances of Majd Mardo and Josha Stradowski are strong. They have a believable chemistry throughout the film and you sympathise with them both. You can feel the spark they have ignite from the moment they meet one another and they carry that through every scene they share.

Just Friends is a sweet movie that is both engaging and entertaining. With strong central performances, a tight script and a satisfying resolution, it’s one of the stronger romantic comedy dramas I’ve seen in gay cinema for a while. You’ll laugh, you’ll feel and you might even shed a tear – what more could you want from a film?