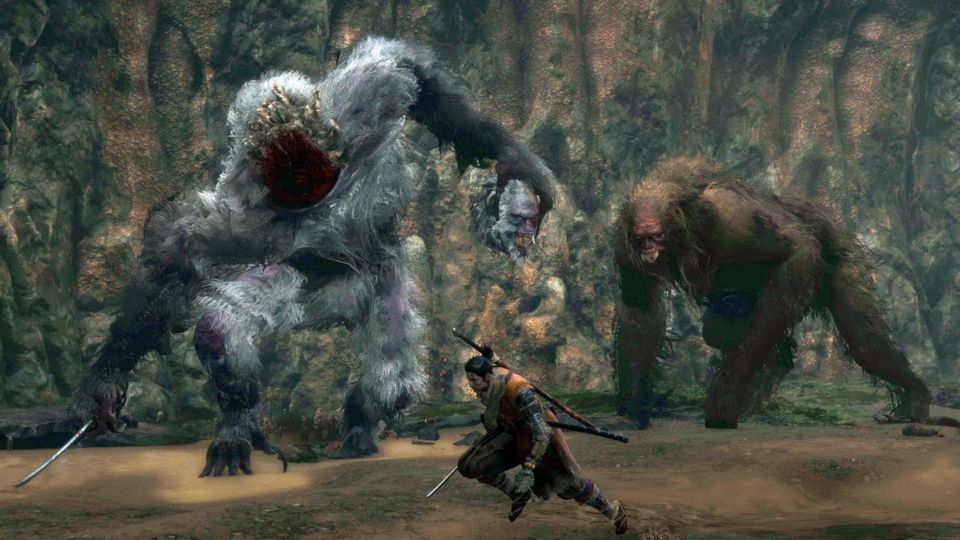 On behalf of FromSoftware, I’m sorry. I’m sorry that the shit throwing ape that caused you so much pain is back again. He isn’t throwing shit this time but he has got another kind of brown friend with him. Thanks Sekiro.

You’ll find him in the Ashina Depths and once again you have no choice but to take him on. Before you start the fight make sure you have firecrackers and the loaded spear equipped.

Once again the fight has two phases but thankfully the first phase is exactly the same as the second phase from the first time you fought him. The only difference here is the much tighter fighting space making it a bit harder to avoid his terror causing scream ability. Try not to get boxed into a corner so that you can run away from it easily enough.

The easiest way to get your damage in here is parrying his string of attacks so that he raises his sword high into the air for a final attack. Parry this one and he’ll be stunned and you can use your spear (make sure you use it correctly and use the pull ability) to rip the centipede out of his neck to cause some serious vitality and posture damage. The next opportunity is when he slides along the ground to get you, simply jump over this attack and you can get three good hits in before getting some distance again.

If you’re good at parrying, unlike me, this stage of the fight should be pretty straightforward.

Once you’ve got in your first deathblow he retreats to the back of the arena and summons his brown friend we mentioned before. Now you have to kill two apes!

Things aren’t quite as bad as they sound. Brown Ape is pretty passive unless Guardian Ape is attacked or vulnerable. Brown will always charge in then Guardian does his scream so us this time to whittle down Brown’s health. If you’re good enough you could ignore Brown and just chip away at Guardian as before. I’m not good enough and needed to separate them. Once you’ve got them split up drop your firecrackers to stun and get in four or five hits. Brown isn’t nearly as tough as Guardian and it won’t be long before he’s gone.

Once Brown is down the fight effectively reverts back to phase one. Keep your cool, pray to the gods of parrying and you should be able to take these guys down in no time.