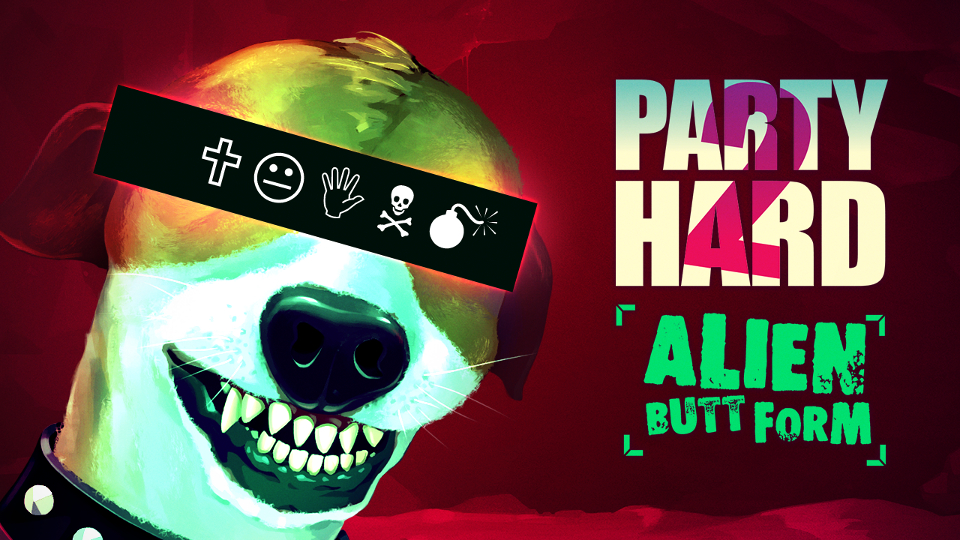 Done with Party Hard 2 and want to keep the music going? Ah, you’re one of those hard to kick out people. That’s alright! Pull up a barstool and take a swing out of that night-old beer bottle (Mmm, something gritty in there!). We’re about to get down on the strange DLC that accompanies an already eyebrow-raising main game.

In Alien Butt Form, you get the same Party Hard arena kill set-up, with loads of strange assets dumped in that aim to give it a new coat of paint. The plotline of the DLC is to find out who has been behind all the killings–suggesting someone, or some…thing was controlling the original killer. Without getting too heavy, Alien Butt Form dumps you right into the thick of it, giving you a new female character that packs a punch (quite literally!). Aside from her, there’s a couple of new personalities to dive into, a tie for my favourite being the ankle biter dog, Mango and the psychedelic madness that is Froger.

If you played the first Party Hard, you’re no doubt going to see the major differences in how levels are structured. Gone is the simple objective of cleaning the party out of patrons–and we saw quite a bit of new objectives in Party Hard 2’s main game. Burning cash, stealing things, destroying evidence and the ever popular, but my least favourite: running from the law as an active pastime. It seems like Alien Butt Form wished to explore this right off the bat, the first and second level of the DLC revolving around Marina’s attempt to scare off people and dodge the SWAT team that comes in to investigate shortly after. Unfortunately, the objectives don’t really add to much in this case, as your main enemy is fighting against a weak stamina meter.

You’ll be crunched for time in a few cases, making the levels being something that have to be memorised to have any sort of clear path through. Oh, and you WILL die and get nicked plenty of times. So much at the rate of really having to take breathers at times, or risk a bit of desk flipping or controller throwing. With the only two difficulties being medium and hard, this franchise has never aimed to mess around, and wants the player to feel the pain–something to consider if this is your first dive in.

There’s not too much to say about the story itself: it’s strange with the same sort of off localisation voice acting and writing that goes along with it, to the point where it becomes a bit distracting on a technical level. While the cutscenes harbour some fantastic art, they tend to be over compressed and come out looking a bit fuzzy. If you played the main game with a friend in co-op, unfortunately you won’t be able to have the same luxury and have to take this party out on your own.

It’s fairly cheap (£5.19) and more than delivers on value for money if you’re a fan of Party Hard 2 in itself. Objectives and achievements will also satiate the hunger of the gamer that fancies themselves to be a completionist. After all, getting through the level is fairly standard, but going for those extra tick boxes makes a challenge within itself. If you’ve not played the main game, I highly suggest taking a stab at that first and seeing how you like it, because Alien Butt Form feels like it’s the type of DLC that delivers specifically to diehard fans of Party Hard 2.

Party Hard 2 was reviewed using a digital code supplied by the publisher.