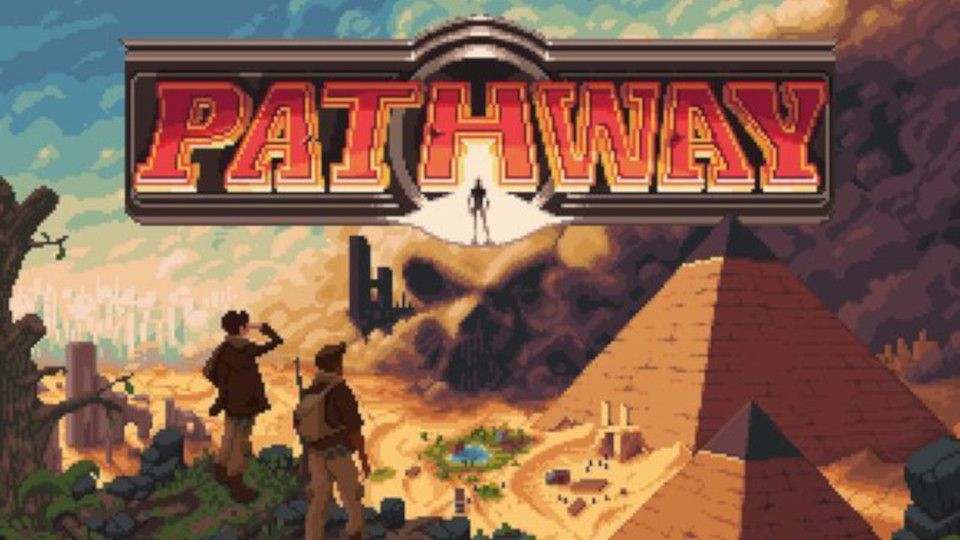 Time to gear up and jump in the jeep for an adventure across the desert! It’s the 1930s and your rag-tag band of capable scallywags are ready to jump into the heat to complete various objectives across the board. There is a finish line, but with treacherous conditions lurking behind every corner, there’s no telling if you will make it out alive!

The first trek into the desert will leave you a bit reeling, and if you’re anything like me who is a casual player of strategy games, you’ll be making your way to the start of the map after an experience learning gruesome death. The good thing about this: you can toggle the difficulty and customize your game to match your abilities. For my first playthough, everything was dialed down–I like to learn mechanics, feel comfortable, then eventually bring the heat. Even on its lowest settings, Pathway proves to be a tricky game in some areas. Choosing your team of adventurers has a lot of bearing on the success of your mission…well, at least before they’re pumped full of stats. You’ll have a hearty roster to peep at, grayed-out unlockable characters taunting you to pour your time in. Each character is unique in what they can do: some are better with aim, some are healers, and some do more damage to specific enemy types. Making your team work for you as they work together takes a bit of a learning curve to get used to, but once you do–they’re going to be your band of lean mean Nazi fighting machines.

Watch the Pathway launch trailer below:

After sorting out who’s coming along, and what you’re bringing, it’s time to pick what you’re doing. Each mission is unique, with an increasingly overall difficulty. Just like with the characters, these are unlockable as you beat them (probably a bit of mercy in that!). As you work your way through the maps, you’ll come upon decisions to make, whether to fight or flee, items to pick up and rest areas to regain your strength. Fuel canisters dictate strategic movement–you have opportunities to find more fuel, or even buy some extra before diving in, but the glaring truth of it being limited will surely be sat in the back of your mind. You can count the steps to the next destination, but there are no absolutes with a curveball around every corner.

Travelling through the map will inevitably take you to the next part of Pathway: the combat screens. The grid structure of combat has both its ups and downs, but ultimately if you’re a casual player of the strategy genre–then this is going to be a fine arena to dip your toe in. Who you chose to be on your team will come in to play here, as you try to best enemies on foot by sneaking, performing a crackshot, throwing grenades and moving around the combat map in the smartest way possible. On the whole, I thought combat was pretty good, but it definitely had its frustrating moments early on. There also seems to be a bit of backlash on Steam forums about the depth of combat from veterans of the genre–so take it as you will. I quite enjoyed it, but if you’re looking for excruciatingly detailed combat, this might not be for you.

View some Pathway screenshots in our gallery:

You’ll have a fantastic mixture of Indiana Jones aesthetic in Pathway, which works very nicely with the pixel art graphics. Stunning palettes with some wonderful animations really make it hard to not love looking at the game as a whole. It’s charming and pairs really well with the combat, and bizarre happenings as you come upon them. As a casual player, I never really found myself coasting through the maps; everything was simple enough to pick up on the fly, but really took some thinking about. Plenty of failures, but with each mission failed something new was learned and applied. I really enjoyed playing this with my eight year old too–he was captivated by the look, but really got into the mechanics, and even surpassed me in cleverness (and boldness too! Kids have no fear when sending adventurers into the desert apparently!).

It’s fun, it’s lighthearted (as much as traversing a desert full of Nazis can be), and it’s got a fair bit of replayability, especially at a reasonable price of £12.99 on Steam. Building your roster’s capabilities and maintaining a purse and inventory are the real long game here, and after initial failure, Pathway really takes hold and begins to be more manageable. I recommend it if you’re looking for a different type of scenario in strategy games, and/or have a penchant for pixel art graphics.

Pathway was reviewed using a digital code supplied by the publisher.

In this article:Pathway, PC, Steam